A father brought his 6-year-old son into the office because he wanted to know why his son’s nails were “turning black and about to fall off.” Approximately 1 month prior to the office visit, the patient had hand-foot-and-mouth disease (HFMD). The patient had had a fever accompanied by vesicles in his mouth and hands that had lasted for a few days. Approximately 2 weeks later, the patient’s mother and father began to notice progressively worsening changes in the nails on his hands and feet. The nail changes were not associated with any fever, fatigue, congestion, nausea, vomiting, or diarrhea.

The patient appeared to be healthy, and he had no past medical history and no history of allergies. Physical examination findings were unremarkable except for nail separation from the nail matrix on the index finger of the right hand and on the first 2 toes of the left foot. There was discoloration of the right great toe along with some nail separation. There was no evidence of pain, erythema, swelling, discharge, or foul odor. 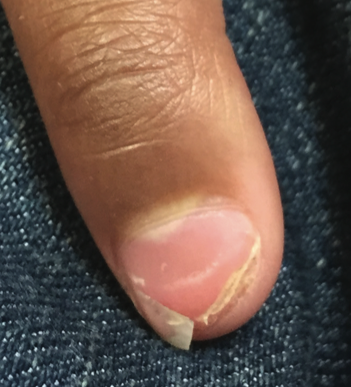 Onychomadesis is defined as proximal nail plate separation from the nail matrix and nail bed caused by a temporary arrest in nail matrix activity, and it may present as a Beau line.1 Nail matrix arrest, including Beau lines and onychomadesis, has been associated with a range of drug exposures and systemic illness.2 In 2000, onychomadesis and Beau lines were first reported following a previous diagnosis of HFMD in 5 children between the ages of 22 months and 4 years.2 Another study reported onychomadesis involving the fingernails and toes of 4 Korean children following HFMD.1

The association between HFMD and onychomadesis is poorly understood.  However, these nail changes are temporary and result in spontaneous regrowth. It is important to reassure the family that this nail shedding is a result of the previous HFMD, that the shedding is self-limiting, and that the nails will grow back normally. It can take approximately 6 months for regrowth.