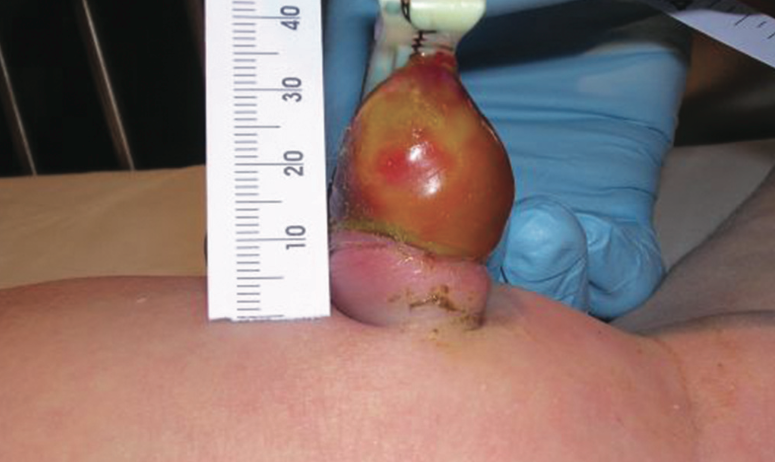 A baby girl, born at full term via spontaneous vaginal delivery, was noted to have swelling of the umbilical stump shortly after clamping of the cord. Over the next 3 days, the stump enlarged and became erythematous. The nontender 2 × 3-cm umbilical stump had greenish-red discoloration within the protruding cord remnant and surrounding erythema at the base. Physical examination findings were otherwise unremarkable.

This infant has an omphalomesenteric duct cyst. This cyst usually ranges from 0.4 cm to 6.0 cm in diameter and appears as cystically dilated small segment of the GI tract that protrudes from or occupies the umbilical stump. Columnar epithelium lines the interior of the cyst and resembles that of gastric, small intestinal, or colonic mucosa; islands of pancreatic tissue may be associated with the cyst lining. Omphalomesenteric duct cysts occur more often in males than in females and are unrelated to prematurity, maternal age, race, or gravidity.1

Abdominal ultrasonographic findings in this patient were negative. Surgical exploration of the lesion revealed an associated Meckel diverticulum. Both the diverticulum and cyst were resected without incident. The postoperative course was uneventful. ■