Omalizumab in Difficult-to-Control Asthma: Allergic or Not?

Two common pitfalls in everyday asthma care are the misconceptions that omalizumab is a new asthma treatment, and that it is not recommended by the 2007 National Asthma Education and Prevention Program (NAEPP) stepwise asthma treatment guidelines. Neither is in fact true. Omalizumab (Xolair) was introduced in 2003 as the first asthma biologic, and it remains the only available recombinant monoclonal antibody designed to bind to circulating immunoglobulin E (IgE), preventing IgE from binding to high- and low-affinity receptors on mast cells and basophils (Figure 1). 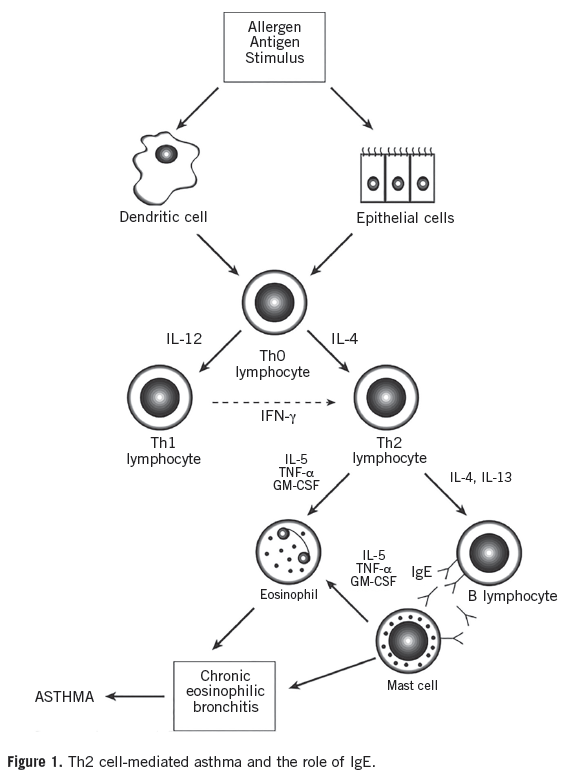 IgE is central to the pathobiology of “allergic” asthma. In brief, antigen-specific IgE (eg, dust mites, dogs, cats, cockroaches) from sensitized B lymphocytes binds to mast cells in the bronchial smooth muscle of asthmatics. The mast cells then become primed to release mediators (ie, histamine, leukotrienes, and proteases immediately, and interleukin 4, 5, and 13 later) in the early and late phases of the “allergic” inflammatory cascade when the offending antigen is encountered again and mast cell–bound IgE antibodies cross-link on the cell surface.

Approximately 60% of asthma patients achieve well-controlled asthma with inhaled corticosteroids (ICSs), but some patients with allergies require step-up therapy, some by blocking IgE.1

The recognition of type 2 inflammation in the 1990s and early 2000s provided multiple therapeutic targets for asthma therapy, including IgE with omalizumab and, more recently, antibodies that interrupt the effects of interleukin 5 and interleukin 13.3

The key activity in clinic is to objectively monitor asthma control on a regular basis with, for example, the Asthma Control Test (ACT). Using the ACT in primary care finds as many as 58% of asthma patients to be not well controlled, despite the regular use of ICSs and long-acting β2-agonists (LABAs).4

For patients with uncontrolled asthma, omalizumab has been the only asthma biologic recommended in the NAEPP guidelines. Since omalizumab’s approval by the U.S. Food and Drug Administration (FDA) in 2003, the majority of omalizumab-treated patients in clinical trials and the “real world” (not under the scrutiny of a rigid research protocol) not only have sustained short-term benefits of significantly better asthma control at 16 weeks, but also have experienced longer benefits for many years, if not a decade, including a reduced number of exacerbations and a higher quality of life.

Omalizumab is the recommended add-on drug to combined ICSs and a LABA at steps 5 and 6 of the NAEPP guidelines to treat moderate to severe persistent asthma before prednisone. Omalizumab requires clinicians to locate a facility that can administer the drug safely in a real-world “clinical trial of one” for 16 weeks to strive for control of persistent asthma and recurring acute exacerbations.5

One group of researchers last year reviewed the outcomes of 4117 asthmatics in 24 clinical studies from real-life practice in 32 countries.5 All of the therapeutic benefits of better asthma control, including safety, were realized in the majority of patients, and these results coincide with our clinical experience at UC Davis in nearly 50 adult asthma patients.

A dangerous pitfall is to resort to prednisone before trying omalizumab as an add-on treatment to high-dose ICSs plus a LABA in asthma patients who have allergies. At UC Davis, we strongly recommend against introducing prednisone early for daily control of asthma because of the myriad possible adverse effects, including obesity, osteoporosis, Cushing syndrome, gastroesophageal reflux disease (GERD), diabetes mellitus, pneumonia, and severe mood changes.

We stress earlier referral to our UCAN Clinics using an algorithm (Figure 2) to simplify access to consultation if the patient’s ACT score remains less than 20 of a maximum 25, if the patient is unable to be weaned from prednisone, or if the patient has been readmitted to an emergency department or hospital for severe exacerbation in the past 4 months despite apparently adequate asthma therapy. 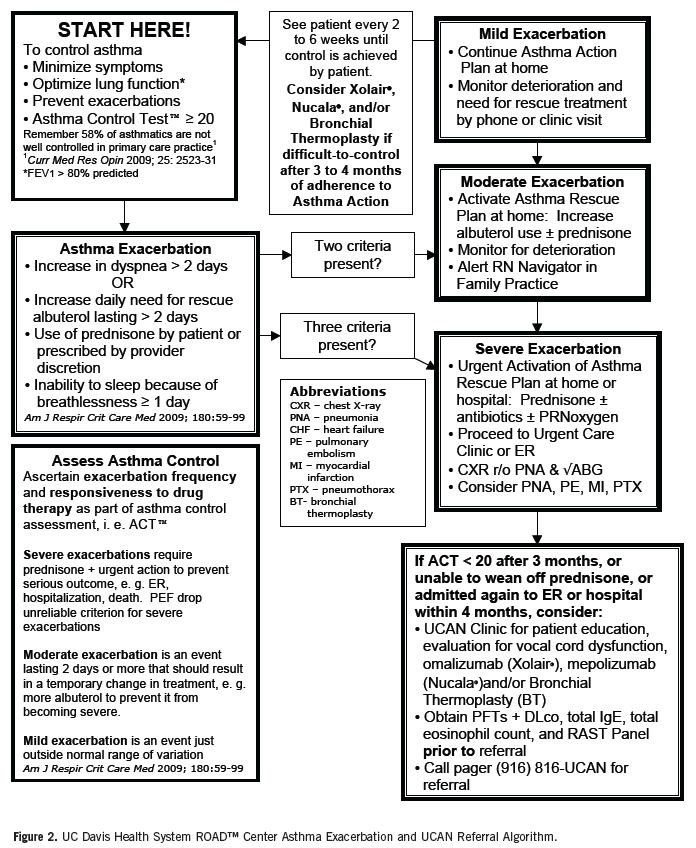 Omalizumab’s half-life is 26 days. After targeting and binding to circulating IgE in blood, it exerts anti-inflammatory effects on the cellular and clinical markers of type 2 or Th2 cell-mediated airway inflammation of the lower respiratory tract of asthmatics (Tables 1 and 2). The half-life of IgE in serum is 2 hours, but the half-life is several months once it is attached to mast cells and basophils, which become primed to release its mediators upon subsequent exposure to the offending allergen. These effects are apparent in both children and adults, and they have been confirmed in multiple real-world studies worldwide. Down-regulation of high-affinity receptor expression on mast cells and basophils is thought to be another consequence of omalizumab treatment.1 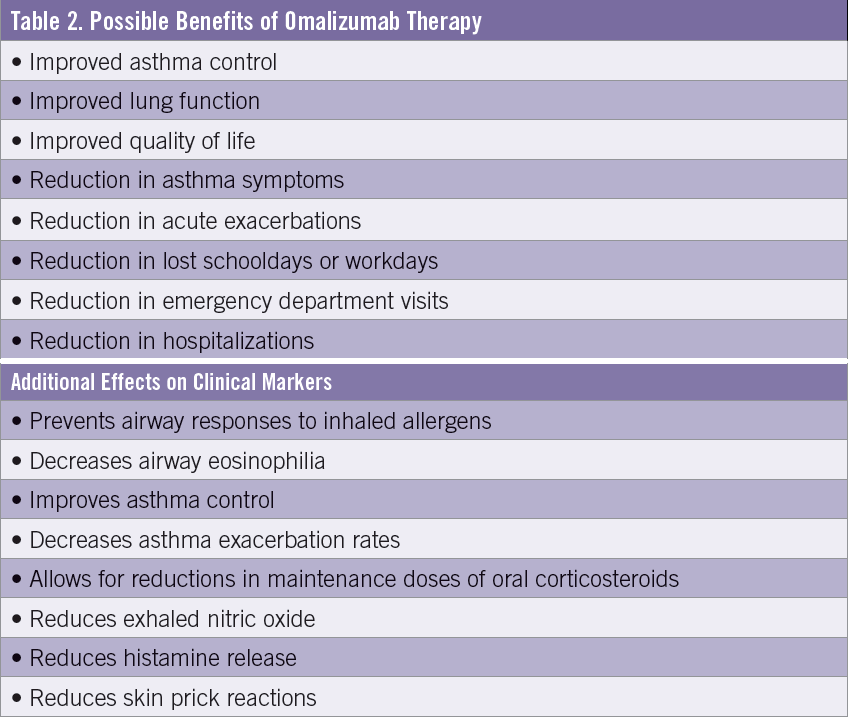 Research data reveal an important role for IgE in the pathogenesis of asthma exacerbations.3 The mechanism of effect may relate to the interaction between IgE and interferon-α (IFN-α) secreted by plasmacytoid dendritic cells (pDCs). Specifically, IgE crosslinking impairs IFN-α production and hence antiviral responses by pDCs52, so that omalizumab may reduce virus-induced asthma exacerbations (which are the most common type of exacerbations) by restoring the antiviral activity of pDCs.

Omalizumab is well tolerated and is generally is considered safe. Some of the most common adverse drug reactions of omalizumab include injection-site reaction, viral infection, upper respiratory tract infection, sinusitis, headache, and pharyngitis. There is a small (0.2%) risk of anaphylaxis with omalizumab therapy, including anaphylactic shock, shortly after injection. The mechanism of anaphylaxis of omalizumab is not IgE-mediated. Therefore, omalizumab, like traditional allergy shots, requires medical supervision after subcutaneous injection.

Most treatments balance safety and effectiveness and risk and benefit. Allergy shots and omalizumab are no different. When done properly, they can be life changing. But they do carry some risk and are not to be done without patients’ full understanding of the risk of anaphylaxis.

Local injection-site reactions are common immediately or hours after injection. Systemic reactions are less common but can become serious, including urticaria, wheezing, tightness in the chest from airflow obstruction (leading to dynamic lung hyperinflation), oral or throat swelling, nausea, and dizziness and fainting from systemic hypotension, heralding anaphylaxis and possible shock.

Estimates of death with allergy shots are 1 in 1 million, anaphylaxis or systemic reactions are estimated to occur in 1% to 4% of cases. Systemic reactions for conventional allergy immunotherapy reportedly range between 0.8% and 46.7% (mean, 12.9%).6 It is important to remember that allergy shots are considered adjunctive treatments in the NAEPP guidelines and are neither preferred nor recommended alternative treatments.6

An urgent assessment is needed whenever anaphylaxis is suspected, and at the same time epinephrine, 0.3 mg in a 0.5 mL 1:1000 dilution, should be administered intramuscularly without delay, and again if necessary, to prevent anaphylactic shock and even death.

Omalizumab always should be administered in a setting where emergency resuscitation equipment and trained health care professionals are immediately available to treat anaphylaxis or severe systemic reaction. The American Academy of Allergy, Asthma, and Immunology recommends a 2-hour observation period after the first 3 omalizumab injections and 30 minutes thereafter.7

No deaths have been reported in association with omalizumab therapy. In comparison, 41 deaths occurred between 1990 and 2001 associated with allergy immunotherapy.8

For patients outside the clinic setting, it is a very dangerous pitfall to wait for the signs and symptoms of anaphylaxis to worsen before treating with epinephrine, 0.3 mg of a 1:1000 dilution in adults and 0.15 mg in children.

It is important to obtain baseline IgE levels and pulmonary function tests, including peak flow and forced expiratory volume in the first second of expiration (FEV1). IgE levels should not be used during treatment to monitor a patient’s response, since omalizumab and IgE form complexes that increase serum total IgE levels, and the available assays report only total levels. During treatment, it is important to monitor how often a patient is symptomatic. IgE levels should not be repeated until at least 1 year after omalizumab is discontinued, since total IgE levels remain elevated for 1 year after the discontinuation of therapy.

Omalizumab has had 2 relatively recent label safety updates for malignancy risk and cardiovascular risk, both resulting from EXCELS, a 5-year long-term observational safety study.9 Results from this study suggest that omalizumab is not associated with an increased risk of malignancy. However, a higher incidence (rate per 10,000 patient-years) of overall cardiovascular and cerebrovascular serious adverse events (SAEs) was observed in omalizumab-treated patients (13.4) compared with untreated patients (8.1), including transient ischemic attacks, myocardial infarction, venous thromboembolism, and unstable angina.

These observations suggest a potentially increased risk of SAEs in patients treated with omalizumab; however, the observational study design, an inability to adjust for unmeasured risk factors, and the baseline imbalances in cardiovascular risk factors between the treatment groups limit the ability to quantify the true magnitude of the risk of omalizumab to asthma patients. The lack of such a signal in the randomized database from clinical trials can be reassuring, but the risk to patients at high-risk for cardiovascular SAEs should never be minimized.

All patients prescribed omalizumab need to be educated and made aware of the risk of treatment. The risk of not using omalizumab also needs to be discussed, along with the greater potential risks of more frequent severe asthma exacerbations and oral corticosteroid use.

The dosage and frequency of omalizumab are based on body weight and total serum IgE levels (30-700 IU/mL). Generally, the average dose is from 150 to 375 mg every 2 or 4 weeks. Omalizumab is administered by subcutaneous injection, with the maximum dose per injection site being 150 mg. If a dose greater than 150 mg is needed, it can be split and administered at multiple injection sites. If a dose greater than 450 mg is needed, the dose can be split in half and administered every 2 weeks instead of every 4 weeks.

Omalizumab was approved by the FDA in 2003 as the first biologic immunomodulator indicated for the treatment of uncontrolled, moderate-persistent to severe-persistent allergic asthma. Recent studies have confirmed the efficacy and safety of omalizumab in patients who were maximized on appropriate drug therapy based on the disease severity.

In the populations evaluated in the literature, and in our experience at UC Davis, clinically significant improvements (decreased exacerbations, improved quality of life, decreased doses of corticosteroids) have occurred in patients with difficult-to-control asthma who were treated with omalizumab.

Omalizumab is not considered a first-line agent in the treatment of allergic asthma, primarily because of the long-term costs and the general effectiveness of ICSs. But ICSs are effective in achieving well-controlled asthma in 60% to 70% of patients with asthma. Hope for omalizumab to be a complete cure for allergic asthma has not been realized in clinical trials nor in our experience when ICSs are discontinued.

Omalizumab should be reserved as either a second- or third-line agent after confirmed adherence to combined ICSs and a LABA (NAEPP step 5) and definitely before daily prednisone (step 6).

Nicholas J. Kenyon, MD, is codirector of the UCAN program and a professor and chief of the Division of Pulmonary, Critical Care, and Sleep Medicine at UCDMC in Sacramento, California.

Samuel Louie, MD, is a professor of medicine in the Department of Internal Medicine, Division of Pulmonary, Critical Care, and Sleep Medicine at UCDMC in Sacramento, California.