Congenitally corrected transposition of the great arteries is a rare congenital heart defect that is usually diagnosed and treated during the first few months of life. The absence of associated anomalies portends a good overall prognosis, and diagnosis is delayed until later in life in these patients. Congenitally corrected transposition of the great arteries is characterized by atrioventricular and ventriculoarterial discordance, and patients typically present with symptoms of heart failure. Regurgitation through the systemic atrioventricular valve and systemic ventricular dysfunction limit the length of survival. We present the case of a woman who reached the age of 91 years despite having an unrepaired congenitally corrected transposition of the great arteries associated with a ventricular septal defect. To our knowledge, the oldest individual previously reported in the literature to have survived with this anomaly was 80 years of age.1 Our case presentation provides an additional exceptional example of the unique capacity of the morphologic right ventricle to adapt and sustain high systemic pressure for a prolonged period of time.

A 91-year-old woman presented to an outpatient clinic with a 6-month history of progressive shortness of breath on exertion. Her medical history included a diagnosis of unrepaired congenitally corrected transposition of the great arteries in infancy, two uncomplicated pregnancies, type 2 diabetes mellitus, and sinus node dysfunction with atrial fibrillation that had been treated with pacemaker implantation 5 years earlier. Overall, the patient was in good health. She had been performing her activities of daily living without any problems until 6 months before her current presentation, when she started noticing progressive shortness of breath on exertion and mild lower leg edema.

The physical examination was significant for mild jugular venous distension and pitting edema in the lower extremities. Chest auscultation revealed an S3 holosystolic murmur at the upper left sternal border and mild bilateral basilar crackles. An electrocardiogram revealed atrial fibrillation with Q waves in V1-V3. Transthoracic Doppler echocardiography showed congenitally corrected transposition in the SLL anatomical arrangement (situs solitus of atria with L-looping of the ventricles and the aorta that is anterior and to the left of the pulmonary artery; Figure). The morphologic right ventricle on the left side of the patient’s heart was trabeculated and mildly dilated, and its function was mildly depressed. A small membranous ventricular septal defect with a right-to-left shunt was also noted (the peak gradient across the defect was 40 mm Hg). The morphologic tricuspid valve showed moderate-to-severe regurgitation. A review of the patient’s health records indicated that she underwent echocardiography 2 years earlier, which revealed mild tricuspid regurgitation. A persantine thallium stress test performed during a subsequent visit showed an anteroseptal fixed moderate defect at rest and at exercise. Subsequent cardiac catheterization performed during the current presentation did not reveal the presence of coronary artery disease.

The patient was placed on furosemide, carvedilol, and benazepril for the treatment of heart failure; oral antidiabetic agents including glimeperide and metformin; and warfarin for the treatment of atrial fibrillation. Follow-up after 1 month and 6 months confirmed the absence of leg edema and improvement of the patient’s shortness of breath. 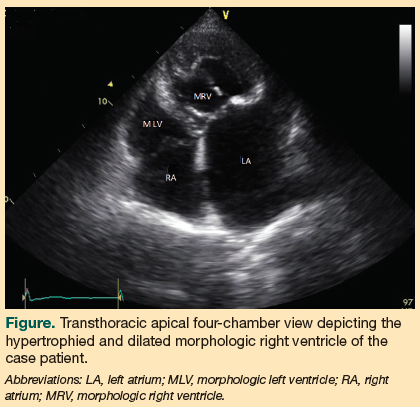 Regurgitation is thought to occur secondary to anomalous septal valve attachments and their progressive degeneration with age.5 To our knowledge, the case patient discussed in our article is the oldest surviving individual with unrepaired congenitally corrected transposition of the great arteries. The oldest individual previously reported in the literature to have survived with this anomaly was 80 years old.1 The etiology of heart failure in the 91-year-old patient discussed in our article was tricuspid regurgitation, although congestive heart failure can occur in the absence of a systemic valve anomaly. The right ventricle usually hypertrophies in response to systemic pressure. The ensuing mismatch between the single right coronary artery perfusion and the increased right ventricular mass can lead to ischemia and fibrosis.6 This may result in the presence of a fixed defect (mostly anterior) on myocardial perfusion imaging.2

The characteristics that determine the capacity of the right heart to withstand systemic pressure are not well defined. Thus, several early repair techniques have been developed in an attempt to restore normal sequence between cavities and vessels. Surgical treatment was still debatable until the advent of the double switch of atria and great vessels after the retraining of the left ventricle by pulmonary artery banding. Indeed, banding of the pulmonary artery when performed during infancy creates a partial outflow obstruction against which the morphologic left ventricle pumps. This simulates, to a certain degree, the high resistance of the systemic circulation. Previous surgical repairs that leave the right ventricle as the systemic ventricle or that only correct associated anomalies were associated with high rates of complications, such as postsurgical heart block, progressive tricuspid regurgitation, and subsequent heart failure on long-term follow-up. With the advent of double switch surgery, a procedure typically performed during infancy, outcomes were improved. Fewer short- and long-term complications are observed because this procedure restores the morphologic left ventricle as the systemic ventricle.5 The double switch corrects the chamber discordance by combining arterial and atrial switches.7 However, the long-term prognosis with this procedure depends first on the ability of the morphologic left ventricle to generate systemic pressure and secondly on the severity of the preexisting tricuspid regurgitation. The oldest patient reported to have undergone the double switch procedure is a 32-year-old man with pulmonary valve obstruction, a large ventricular septal defect, and severe systemic atrioventricular valve regurgitation.8

The prolonged life span of the case patient discussed in this article and the late onset of her heart failure symptoms indicate that the morphologic right ventricle may substitute the function of a left ventricle for a sufficiently prolonged period of time without surgical intervention. Surgical intervention should not be delayed when the diagnosis of congenitally corrected transposition of the great arteries is made during infancy. In the absence of associated anomalies, the life expectancy of patients with unrepaired congenitally corrected transposition of the great arteries depends on the ability of the right ventricle to withstand systemic pressure.