How Diabetes Affects the Eye

There are many proposed mechanisms for how diabetes affects the eye; however, the exact mechanism is not fully understood. Proposed mechanisms contributing to the microvascular damage in diabetes include the direct toxic effects of hyperglycemia, sustained alterations in cell signaling pathways, and chronic microvascular inflammation with leukocyte-mediated injury.9 Whatever the mechanism or combination of mechanisms, the end result is retinal blood vessel leakage, hemorrhaging, and ischemia.

Other common nonretinal findings and symptoms of diabetic eye disease include fluctuations of refractive errors when glucose from the aqueous and vitreous diffuse into the natural lens. In cases of proliferative diabetes, neovascularization of the iris and anterior chamber angle can lead to the development of neovascular glaucoma. Extraocular muscle palsies cause diabetics to have diplopia. Premature cataracts and papillopathy of the optic nerve lead to blurred vision or even significant sight loss.10 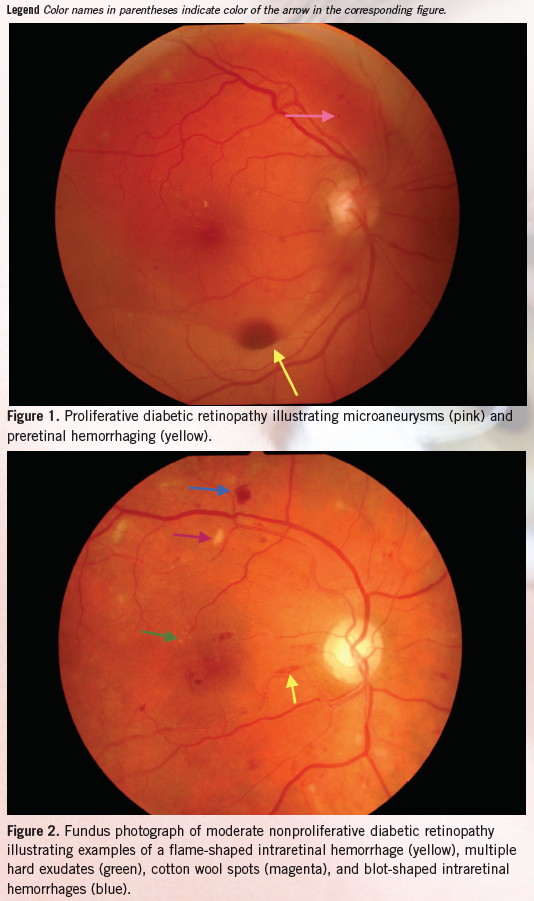 The following are classifications of diabetic retinopathy according to the Early Treatment Diabetic Retinopathy Study (ETDRS). The ETDRS scale is the gold standard from which a number of other grading scales have been adapted.11

Nonproliferative diabetic retinopathy (NPDR) is characterized by the presence of hemorrhages and/or microaneurysms, hard exudates, cotton wool spots (white, fluffy-appearing patches occurring in edematous areas of the retina), intraretinal microvascular abnormalities (IRMA; abnormal communication between arterioles and venules), and venous beading. This category can be further broken down into mild, moderate, and severe forms of NPDR.

Proliferative diabetic retinopathy (PDR) occurs when there is significant retinal ischemia and requires the presence of neovascularization on the retinal surface or a vitreous/preretinal hemorrhage.

Diabetic macular edema (DME) can occur independently or in addition to either NPDR or PDR. DME is diagnosed by retinal thickening and hard exudates in the macular area. DME is the leading cause of vision loss in type 2 diabetics.12 To diagnose DME, the clinician has to view the macula in 3-D. Unfortunately, the view obtained using a direct ophthalmoscope is not adequate to diagnose DME.

Blood glucose control is the single most important modifiable risk factor for the development and progression of diabetic retinopathy.13 The Diabetes Control and Complications Trial (DCCT) found that in patients with type 1 diabetes mellitus for 30 years the cumulative incidence of proliferative retinopathy was 50%.14 The DCCT also reported that nearly 27% of patients with diabetes mellitus type 1 develop DME within 9 years of diabetes onset.14 For type 2 diabetes mellitus insulin-dependent patients, the 10-year incidence of proliferative retinopathy is 25.4% and for diabetes mellitus type 2 noninsulin-dependent individuals, that figure is 13.9%.14 Because almost 26 million children and adults in the United States have diabetes, a large number of patients are at risk for DME.15 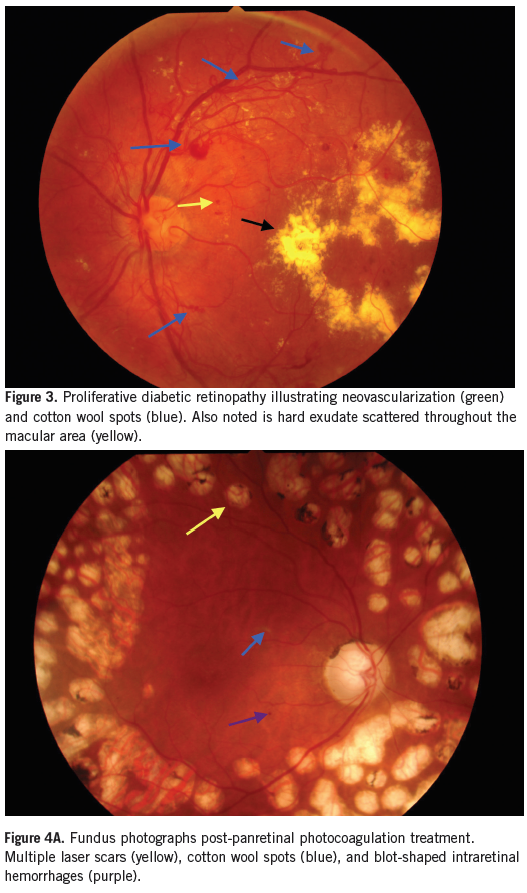 Often, 1 of the first ocular signs of diabetes is microaneurysms. These occur as a result of weakened capillary walls, predisposing the small retinal vessels to leakage (Figure 1). Microaneurysms can be difficult to see, even with the high magnification of direct ophthalmoscopy. Fluorescein angiography (FA) may be necessary to truly visualize microaneurysms. FA is a procedure in which fluorescent dye is injected into the bloodstream and a series of photographs are taken with a retinal camera to evaluate the blood flow to the retina and choroid. FA is indicated when there is suspicion that a patient has neovascularization of the retina or disc and/or when DME is suspected. Intraretinal hemorrhages are another sign of diabetic retinopathy. They are referred to as dot/blot or flame-shaped hemorrhages because of their appearance. Their appearance is dictated by their location within the retina. Dot/blot hemorrhages occur in the inner layers of the retina, so the blood is spread out vertically and appears to be confined to a small area (Figures 2, 3, 4A, and 4B). Flame-shaped hemorrhages are located within the tightly packed nerve fiber layer. The blood spreads horizontally across the retina within this layer, giving the hemorrhage an elongated flame-shaped appearance (Figure 2). Cotton wool spots are areas of the retina that have become ischemic and consequently, turned a white or yellow color (Figures 2, 4A, and 4B). They represent localized nerve fiber layer swelling secondary to obstructed axoplasmic flow.16

Hard exudates are lipid residues of serous leakage from damaged capillaries and breakdown of the blood-retina barrier.17 They appear as yellow-colored deposits with sharp margins (Figures 2, 3, and 5). They can occur singularly or as a circinate ring.16 If they are present in a circular pattern, it is safe to assume there has been, or is currently, swelling of the retina within the borders of the hard exudate (Figure 3).

These ocular signs are not necessarily in order of presentation. Although microaneurysms are almost always present if other signs of diabetes are visualized, it does not mean that hemorrhages must be present before cotton wool spots or that IRMA only occurs if hard exudates have been documented. 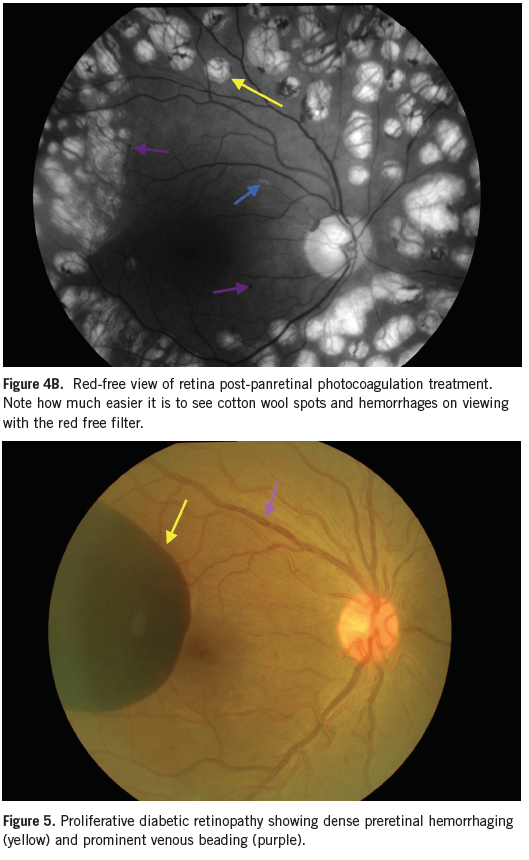 All patients with a diagnosis of diabetes should have a comprehensive annual eye examination with dilation. This examination should include a slit lamp evaluation for neovascularization of the iris or anterior chamber angle and for cataracts. The dilated fundus evaluation should include a magnified lens analysis to check for macular edema and binocular indirect ophthalmoscopy for evidence of retinal neovascularizaiton. Optimally, these exams are performed by eyecare practitioners. Optometrists who perform dilated eye examinations can assess the various stages of diabetic retinopathy. They would need to refer any patients with potentially sight-threatening findings to the general ophthalmologist or retinal specialist. Any evidence of macular edema or neovascular changes of the iris or retina need to be referred urgently for ophthalmologic assessment and management.

Panretinal photocoagulation (PRP) is a laser procedure that is performed when a patient has high-risk PDR and may be a viable option for patients who are
approaching high-risk PDR or who have severe NPDR. This procedure is done with the goal of preventing neovascularization from occurring or worsening, to induce regression of any existing neovascularization, and to reduce the risk of vitreous hemorrhage or tractional retinal detachment.20 It involves using a laser to make many burns in the peripheral retina (Figures 4A and 4B).

Focal or grid laser photocoagulation have been shown to reduce moderate vision loss in patients with DME by up to 50%.21 Focal laser seals leaking microaneurysms, while grid laser is used for more diffuse macular edema. Photocoagulation increases local oxygenation by reducing retinal blood flow, which results in the decrease of macular edema.22

Antivascular endothelial growth factor (anti-VEGF) drugs are quickly replacing laser as first-line treatment of DME.23 Anti-VEGF drugs target VEGF, binding to it and preventing the growth of new, weak, and permeable blood vessels. Intravitreal injections of anti-VEGF drugs are indicated when DME is present. Patients with DME should be treated before PRP is performed to the rest of the retina due to the risk of macular edema exacerbation after PRP.

Anti-VEGF injections are considered the standard of care for patients who develop DME and have best corrected visual acuity worse than 20/32.24 This treatment combined with focal or grid photocoagulation results in better visual outcomes than laser treatment alone. Delaying the photocoagulation may be beneficial in this course of treatment, as only 50% of eyes require laser treatments after 24 weeks of intravitreal anti-VEGF injections. Data shows that within 3 to 5 years of therapy, there is a 25% chance of no longer needing injections at all.25 Current anti-VEGF agents include: pegaptanib (Macugen), ranibizumab (Lucentis 0.3 mg), aflibercept (Eylea), and bevacizumab (Avastin). 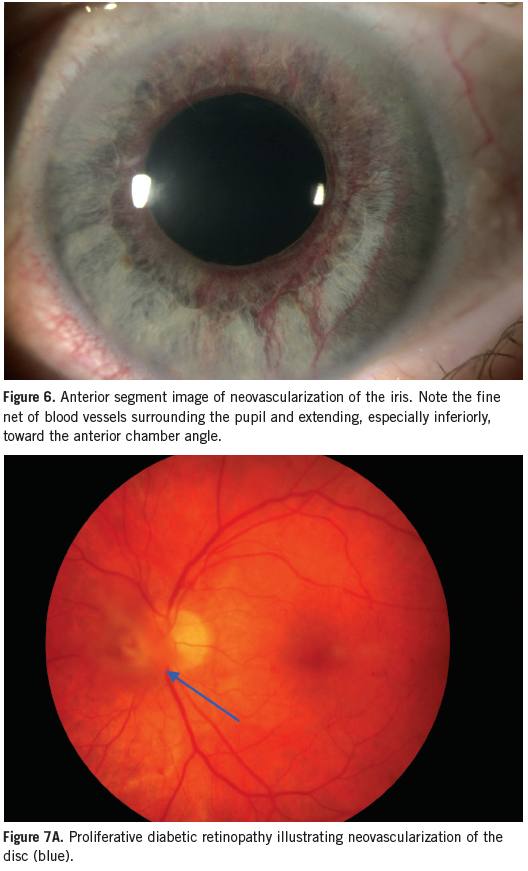 Intravitreal injections of triamcinolone (Kenalog, Triescence) have been shown to decrease macular thickness and improve visual acuity in patients experiencing DME. Kenalog contains benzyl alcohol as a preservative, while Triescence does not.21 Repeat injections are needed every 3 to 4 months and have undesirable side effects in some patients. These side effects include elevated intraocular pressure, which can lead to glaucoma, as well as the accelerated formation of cataracts.27 Another option for steroid treatment of DME are the intravitreal implants dexamethasone (Ozurdex) or fluocinolone (Iluvien). The beauty of steroid implants is that they release low-dose corticosteroid for as many as 36 months with a single injection.28

Vitrectomy is indicated in diabetics who have a nonclearing vitreous hemorrhage, fibrosis, or traction that threatens the macula. Vitrectomy is an outpatient surgical procedure in which the vitreous gel is removed from the eye. Patients with a vitreous hemorrhage that has not cleared on its own after 1 to 3 months should be referred to a retina specialist for a vitrectomy.17

The ability to recognize these signs of diabetic retinopathy will allow for a more streamlined referral process when an ophthalmologist is required for appropriate care. If there is uncertainty, it is usually in the best interest of the patient to refer to a specialist. Patients with diabetes should have a dilated eye examination at least once a year. Those with poor glucose control or other complicating factors may be advised to have their eyes examined more often. 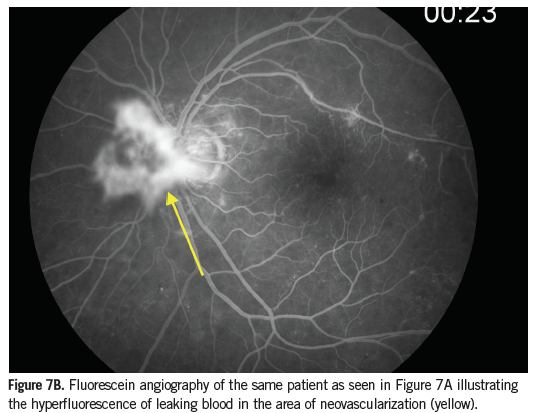 Leonid Skorin Jr, DO, OD, MS, is an ophthalmologist at the Mayo Clinic Health System in Albert Lea, MN.

Kirsten Krein, BS, is a fourth-year optometry student at Pacific University College of Optometry in Forest Grove, OR.