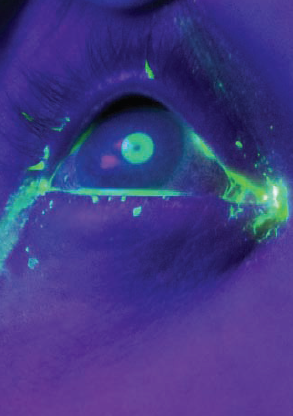 A 36-year-old male presented to the emergency department with an accidental shot to his right eye by an “airsoft” plastic pellet gun, from a distance of approximately 10 feet. He had intense pain in his eye, with blurring of vision and photophobia. He usually wore corrective glasses, which were unavailable at the time.

Visual acuity was 20/200 in the left and 20/400 in the right eye. Pupils were reactive to light bilaterally. Redness and inflammation in the conjunctiva of the affected eye were present. A well-defined round area of fluorescein uptake was visible in the center of the cornea measuring 2x2 mm, consistent with a corneal abrasion.

Corneal abrasions account for the majority of closed eye injuries in adults presenting to the emergency department.1 Initial treatment should be symptomatic, consisting of foreign body removal and analgesia with topical nonsteroidal anti-inflammatory drugs or oral analgesics; topical antibiotics also may be used.2 ■

Neuroretinitis as a Sequelae of Cat-Scratch Disease

A 28-year-old male presented with the main complaint of pressure-like discomfort behind both his eyes, and a “spot” in his central right eye vision for about two days. Other presenting symptoms included bilateral flank pain, coryza, and some mild neck stiffness. He had sought medical attention three weeks previously for whole body aches and pains. A urinalysis at that time revealed proteinuria, and he felt better after a short course of trimethoprim/sulfamethoxazole (TMP/SMX), but the myalgias returned after a week or so. C-reactive protein (CRP) levels and erythrocyte sedimentation rates (ESR) were significantly elevated, and his white blood cell count was 12.5 x 103/L (normal is 3.5 x 103/L to 11.7 x 103/L). Eye examination indicated photosensitivity, decreased visual acuity to 20/400 with a central scotoma, diminished color perception, a trace afferent papillary defect and optic nerve papillitis in his right eye. His left eye was normal. 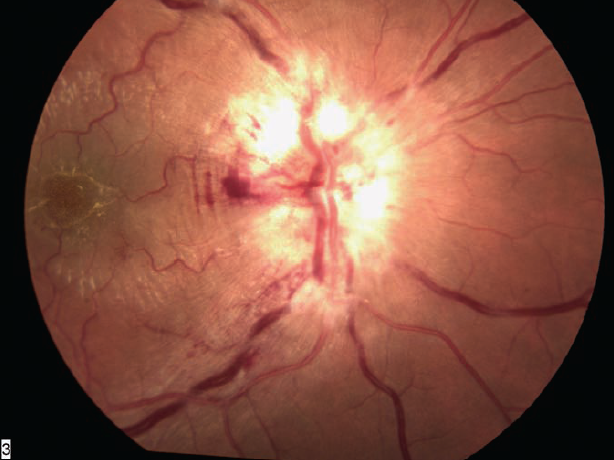 His cerebrospinal fluid (CSF) was unremarkable and an MRI showed no abnormalities to the brain or orbits. It was revealed that the patient had four cats in his home—all with fleas—and he recalled one of them scratching him on the back approximately one month prior to presentation.

The combination of optic disc edema, retinal edema, and macular exudates forming a stellate-like star is indicative of neuroretinitis, which is seen in about 1% to 2 % of CSD cases. While frequently an underlying cause is not identified, other common infectious etiologies include Lyme disease, syphilis, tuberculosis, mumps, and leptospirosis, amongst others. Similar fundoscopic views can be seen in papillitis, papilledema, central retinal veinous occlusion, and anterior ischemic optic neuropathy.1 Features helpful to distinguish neuroretinitis typically include a unilateral presentation, pronounced decreased color acuity greater than visual acuity (though both may be quite severe), the presence of a central scotoma and a relative afferent papillary defect. It should be noted that the macular exudates may not present until several weeks after the onset of papillitis alone, requiring close follow up of these patients.2

The pathogenesis of neuroretinitis is not completely understood, though there is direct involvement of the optic nerve fibers, along with local vascular incompetence, leading to edema and fluid exudation from the inflamed peripapillary retina and accumulation in the macula.2,3 Prognosis is usually generally very good, with disc edema resolving over a period of 6 to 8 weeks, and exudates disappearing over several months. However residual temporal pallor, persistent afferent pupillary defects, optic atrophy, and decreased contrast sensitivity have been documented.4,5 At the 6-month follow up, our patient had decreased depth perception, a mild persistent central scotoma, and optic nerve atrophy suggestive of permanence of these vision changes. ■

All opinions expressed in this manuscript are those of the authors and do not reflect upon the official policy of BUMED, Navy Department, and/or Department of Defense.

Silicone Oil in the Anterior Chamber 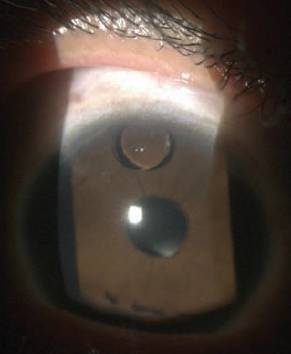 Vision in the right eye was counting fingers at 6 feet and 20/20 with glasses correction in the left eye. The right pupil was slightly irregular and sluggish to light. No afferent pupillary defect was noted. His intraocular pressure was normal.

The silicone oil must be removed from the anterior chamber if it is causing any vision obstruction, increasing the intraocular pressure of the eye or rubbing against the corneal endothelium resulting in corneal decompensation.

Since the patient was asymptomatic and did not have any of the above-listed complications from the silicone oil, surgical removal of the silicone oil was not attempted. The patient was instructed to wear his glasses full-time to protect his left eye and to have annual medical eye examinations. ■

A  70-year-old man presented complaining of a black area in his left eye vision, which extended out from the nasal center. There was no accompanying eye pain, but there was a feeling of pressure behind the left eye. The patient first noticed the black spot two days prior when he had covered his right eye. Since then, the area of blackness has grown and appears larger. The patient noted that he fell and hit his head about a week prior to his vision changes.

The patient’s previous ocular history was unremarkable. He had type 2 diabetes and hyperlipidemia. He was taking rosuvastatin, aspirin and fish oil capsules. 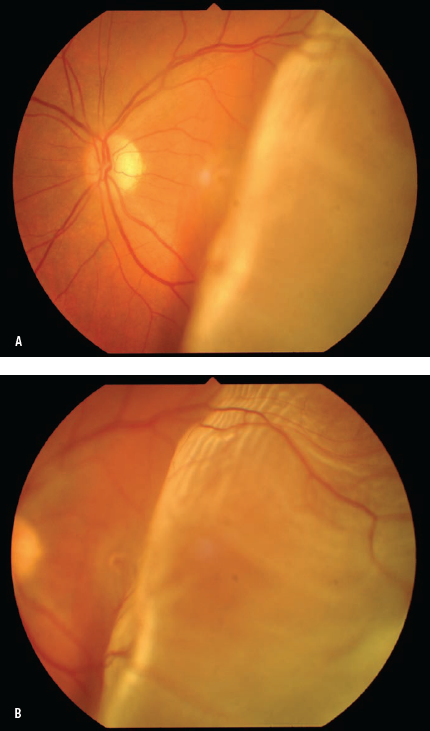 In Figure A, the retina temporal to the optic disc is detached and bullously elevated. The detachment extends shallowly into the macular area which accounts for the patient’s poor vision. In Figure B, the image focus is on the detached retina. The whitish-yellow appearance represents loss of the underlying choroidal red reflex.

Retinal detachments occur when liquefied vitreous fluid enters the subretinal space through a full-thickness retinal break. Retinal breaks or tears occur in areas of strong vitreoretinal adhesion. Separation of the vitreous from the retina may cause retinal tears. Patients with retinal tears often complain of flashing lights, floaters or cobwebs in their vision but no pain. A detachment presents as a curtain or veil coming over their vision.

The key finding in any retinal detachment is if the macula is attached (macula-on) or macula-detached (macula-off). If the patient’s vision is still good, the macula is probably attached. A macula-on situation constitutes an ocular emergency and referral to an ophthalmologist should be done immediately. After a macula-off retinal detachment was confirmed in this patient, he was scheduled for a retinal consultation for the next day. ■