ABSTRACT: Obstructive sleep apnea (OSA) is a chronic disorder characterized by repeated episodes of complete or partial obstruction of the upper airway during sleep. The resulting daytime fatigue and sleepiness are widely acknowledged. Prevalence of the condition ranges from 3% to 7%, with some estimates up to 20% of the US population. Despite our understanding of the disease, the majority of patients go undiagnosed. Of note, OSA is increasingly recognized as an independent risk factor for several clinical derangements. Identifying and treating patients with OSA is a significant way to rapidly reverse these metabolic abnormalities. This article will review the risk factors associated with OSA, introduce a good diagnostic tool for the disease, and the possible ensuing benefits of treating OSA in patients with concurrent metabolic derangements.

Patients with chronic snoring and untreated sleep apnea have a higher risk of both stroke and cardiovascular disease.1,2 Most of these patients have a higher BMI as well as low activity levels and hypertension.1,2 It is also possible for patients with normal BMI and without hypertension to present with snoring and sleep apnea.1,2 Sleep apnea can be associated with recent weight gain, which in turn contributes to tiredness. As a result, people may eat for stimulation and skip exercise. Over time, these habits result in obesity—which can worsen sleep apnea—leading to a progression in severity of both conditions.

A useful tool used to assess patients’ risk for OSA is the Berlin Questionnaire. It is a simple validated 10-item questionnaire certified by the American College of Physicians.6 The questions focus on BMI, snoring, sleepiness, and blood pressure, and consist of 3 categories related to the risk of having sleep apnea.6

Patients can be classified into high risk or low risk based on their responses to the individual items and their overall scores in the symptom categories.6 The classification of high risk is allotted to patients if there are 2 or more categories where the score is positive; low risk is only 1 or no positive category.

For diagnosis, the study should last at least 6 hours to observe the different stages of sleep. One-night PSG testing has an estimated sensitivity of 75% to 88% in detecting mild OSA (apnea-hypopnea index [AHI] of 5 or greater).8

The American Association of Sleep Medicine (AASM) practice parameters recommend a full-night PSG for the diagnosis of all sleep-related breathing disorders. Cost and availability are major barriers to PSG use. In patients where there is a high pretest probability of OSA, an overnight pulse oximetry at home is becoming more popular and can be done with far less expense than at a sleep center.

If the pulse oximetry is positive, patients then undergo a formal sleep study as the titration of continuous positive airway pressure (CPAP), particularly in more complicated patients, can only be done in a sleep center with a formal PSG. Based on an extensive evidence-based review, AASM has concluded that oximetry lacks the sensitivity and specificity to be a reliable diagnostic tool.8

Recent guidelines by AASM recognize that portable/home-based monitoring might be indicated for the diagnosis of OSA in patients for whom in-laboratory PSG is not possible due to immobility, safety, or critical illness. According to the guidelines, portable monitoring can be used as an alternative to PSG for the diagnosis of OSA in patients with a high pretest probability of moderate to severe OSA or to monitor the response to CPAP treatments. Nevertheless, the guidelines stress that portable testing is not acceptable for other patient groups, including those with comorbidities, or to screen asymptomatic patients.9

In some patients, a split-night protocol may be used. This means that the first portion of the sleep study (diagnostic) was so severe that the patient was placed on CPAP therapy for the second portion of the night (titration).6

CPAP therapy is the gold standard sleep apnea treatment and can range from 4 cm to 20 cm water pressure.10

As referenced earlier, OSA is a recognized independent risk factor for several clinical derangements. Studies have shown that CPAP therapy benefits patients with OSA and various comorbidities. These include:

•Diabetes. The Sleep Heart Health Study (SHHS), which included a group of community dwellers (n=2656), found sleep-disordered breathing to be independently associated with insulin resistance and glucose intolerance.11,12 Research has shown that CPAP treatment can improve insulin responsiveness without a significant change in obesity, as was the case with our patient (see A Case Study).11,12

Long-term outcome studies provide the most convincing evidence of beneficial effects of CPAP therapy on the progression and outcomes of coronary artery disease in OSAS. Treatment with CPAP relieved ischemia throughout the night. This is thought to be due to multiple factors including the decrease in heart rate under CPAP, the increase in oxygen saturation, and the decrease in AHI—followed by a decrease of myocardial wall stress. Treatment of patients with OSAS with CPAP can prevent further ischemic events.21

•Arrhythmias. The recent report from the SHHS provides convincing evidence of an independent association between OSAS and nocturnal cardiac arrhythmias, including atrial fibrillation and complex ventricular arrhythmias.22,23 CPAP therapy has been reported to result in resolution of pathological cardiac dysrhythmias.22 Furthermore, researchers found a higher rate of recurrence of atrial fibrillation in OSAS patients who did not accept CPAP therapy compared with OSAS patients who were effectively treated.22,23

• Cerebrovascular disease. Although there is considerable evidence of a higher than expected incidence of OSAS in patients suffering a cerebrovascular event, the evidence for an independent causative effect of OSAS in the pathogenesis of stroke is less persuasive.

Recent reports, however, add support to OSAS as an independent risk factor for the future development of stroke.24-26 OSAS patients have been reported to be twice as likely to suffer a stroke compared with non-OSAS subjects over a 3.5-year follow-up after adjustment for confounders.24-26 Further supportive evidence is provided by large population-based studies such as the SHHS and most recently, the Wisconsin Cohort Study (WCS).27,28

• Endothelial dysfunction. A role for endothelial dysfunction in the pathogenesis of cardiovascular complications in OSAS has been supported by studies demonstrating impairment in endothelium-dependent vasodilatation. Treatment with nasal CPAP has been reported to reverse endothelial dysfunction.29 It is known that a major vasodilator substance released by the endothelium is nitric oxide (NO), and decreased production or activity of NO may be an early sign of atherosclerosis.30 Decreased levels of NO have been found in OSAS patients, and levels increase with CPAP therapy.30

• Metabolic deregulation. Many studies that have reported an independent association of OSAS with several components of the metabolic syndrome, particularly insulin resistance and abnormal lipid metabolism. The SHHS and the WCS have recently identified OSAS as an independent risk factor for insulin resistance, after adjustment for potential confounding variables, such as age, sex, and BMI.27,28 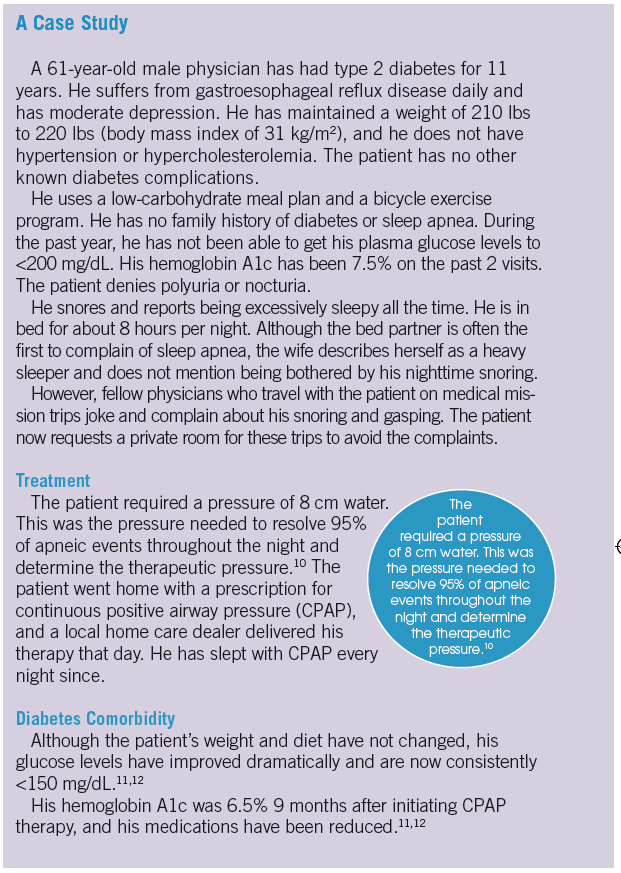 Apnea is an increasing population-health concern and a large number of treatable OSA is not diagnosed. Several studies have shown improvement in metabolic derangements, insulin insensitivity, cardiovascular disease, and cerebrovascular disease after OSA diagnoses and subsequent effective CPAP therapy. The gains in sleep quality and likely ensuing quality of life are also major reasons to identify patients at risk.