Nontraumatic Tibial Fracture in an Infant 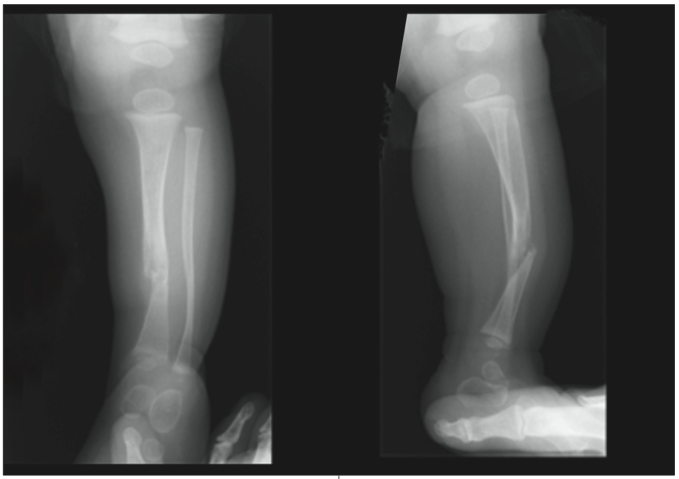 The Case: A 6-month-old boy was brought to his pediatrician’s office for evaluation of a swelling and a “knot” on his lower left leg, which his grandmother had noticed that morning. His family reported that he moved all 4 extremities without distress, but when held in an upright position, he would not put equal weight on both legs.

The infant had a 4-year-old sibling, but no history of a fall or other trauma, no significant past medical history, and no prior surgeries. The family and social histories were likewise unremarkable.

On examination, the infant was afebrile, smiling, and did not appear to be in any pain. He had outward bowing of the left lower leg, without overlying erythema, abrasion, or bruising. The area was nontender to palpation. A radiograph of the left lower leg was interpreted as a tibial fracture.

Although the social situation was not felt to be suspicious for child abuse, an apparent fracture in the absence of recognized trauma caused the pediatrician to question this possibility. The boy was referred to a pediatric orthopedist for further evaluation and management.

The pediatric orthopedist noted obvious anterior lateral apex bowing of the left lower leg. Other notable findings included frontal bossing and small café au lait macules in the right axilla and on the right upper arm and right chest. There was no inguinal freckling. A second set of plain radiographs was obtained (shown).

Is the fracture the result of an accidental or intentional injury—or could it be a sign of an underlying condition?

Answer: The radiographs show congenital pseudarthrosis of the tibia (CPT). The boy was referred to the pediatric genetics clinic to evaluate for possible neurofibromatosis type 1 (NF1). Over the next 18 months, NF1 with benign enlargement of the subarachnoid spaces was diagnosed.

Discussion: Pseudarthrosis refers to a “false joint” that can result from developmental failure or from inadequate healing or nonunion of a fracture. CPT presents in about 1 in 150,000 births and is characterized by abnormal anterolateral angulation of the tibia with tapering of the tibia at the defective site. Fracture and nonunion may or may not be present initially but are always a risk.

The clinical presentation of CPT is widely variable. In severe cases, the deformity presents as an apical prominence on the lateral leg, usually with the foot inverted or medially displaced with respect to the lower leg.1 In mild cases with less tibial bowing, diagnosis at birth (primary pseudarthrosis) can be difficult. More often, this condition presents later in infancy or childhood as a pathologic fracture (secondary pseudarthrosis), such as occurred in this case.1 In these instances, motion can be elicited at the site of the pseudarthrosis. CPT is typically unilateral and occurs at the junction of the distal and middle thirds of the tibia, without side or gender predominance, and with fibular involvement in about half of cases.2

In accordance with the heterogeneity of the clinical presentation of CPT, an array of imaging findings can be discovered. Plain films may show a simple anterolateral convex bowing of the tibia or a true bony discontinuity with a picture of resorption at the fracture margin.2 MRI perfusion sequences can help define vascular defects and delineate the bony and soft-tissue abnormalities more clearly, especially in the periosteum surrounding the pseudarthrosis.3 However, MRI is usually unnecessary for diagnosis.

Numerous schemes to classify CPT have been proposed but have not been found useful in guiding management or predicting outcome.1 The Crawford system, the method used most often, classifies CPT into 4 subtypes and describes the progression of the disease at each stage.4

The pathogenesis of CPT remains elusive. There is a clear association of CPT and NF1; 40% to 80% of patients with CPT are NF1 carriers.2 In this regard, children with CPT should have a thorough clinical examination focusing on the neurological, dermatologic, and ophthalmic findings of NF1.

The typical histopathologic findings include highly cellular fibromuscular tissue with periosteal thickening and a fibrous tissue cuff around the pseudarthrosis, known as fibrous hamartoma in patients with NF1.1,2 Other frequent findings include hyaline cartilage associated with the fibrous tissue, areas of endochondral ossification, as well as resorption lacunae at the junction of the tibia and pseudarthrosis.2

Tibial bowing without a fracture can be managed with an orthosis until maturity or until a fracture develops. Surgery to correct anterolateral tibial bowing of an intact tibia, such as in undiagnosed CPT, has a high risk of nonunion and should be avoided unless severe deformity is present.

When a fracture is present, CPT is managed by surgical intervention. The goals of surgery are tibial union, alignment to avoid refracture, and prevention of limb-length discrepancies.2 The 3 main surgical options are intramedullary nailing with bone graft, vascularized free fibular transfer, and Ilizarov-type ring external fixation.2,5 All approaches follow the same underlying principles: resection of the pseudarthrosis area of the bone, fixation to bridge the bony defect, and correction of any angular abnormality.

The rate of union at the site after the initial procedure has been reported as 60% to 100%. Complications—which can occur even when union is obtained—include valgus ankle (45% to 87% of cases), limb shortening (up to 94%), recurrent anterior deformity, and refracture.5-7

Many children are braced until maturity, even when union is obtained, to prevent recurrence. Amputation is a treatment option that has been used in the past; however, it should be reserved for children whose feet are nonfunctional or for those in whom at least 3 attempts at obtaining union have failed. With improved healing rates using current methods, amputation is rare and the child should have a functional leg and foot at maturity.

Outcome in this case. The boy was prescribed a clamshell knee-ankle-foot orthosis (KAFO) to protect alignment. He continued to use the KAFO until 2 years of age; during this period, he crawled actively but never walked.

At age 2 years, he underwent excision of the lesion, intramedullary fixation, and application of bone morphogenic protein (BMP). Postoperatively, at 2 months, he was still not walking and a protective clamshell cylindrical brace was prescribed; at 4 months, he was standing but not walking.

Because of nonunion of the CPT at 7 months post procedure, the child underwent a second surgical repair involving resection of the nonunion site, fibular autografting, BMP application, and a different type of intramedullary fixation. Six weeks later, there was union at the CPT site with a ½-inch shortening of the left leg. He was again given a clamshell KAFO and shoe lift, and he began walking. At his last follow-up at age 4 years, he was developing appropriately and union at the CPT site was maintained.