A 56-year-old woman with a history of diabetes mellitus type 2 controlled on insulin and end-stage renal disease on peritoneal dialysis was transferred from an outside hospital. She presented with abdominal pain accompanied by nausea, vomiting, fever, and chills.

She was treated empirically with broad-spectrum antibiotics for presumptive catheter-related peritonitis. Due to lack of improvement, she was transferred to our hospital where symptoms persisted. Physical exam revealed an afebrile patient with hyperactive bowel sounds, mild abdominal distention, and tenderness to palpation throughout the abdomen.

Laboratory studies showed a white blood cell count of 11,000/mm³, hematocrit of 37%, and platelets of 164,000/µL. All other data were unremarkable with the exception of a creatinine of 6.1 mg/dL. 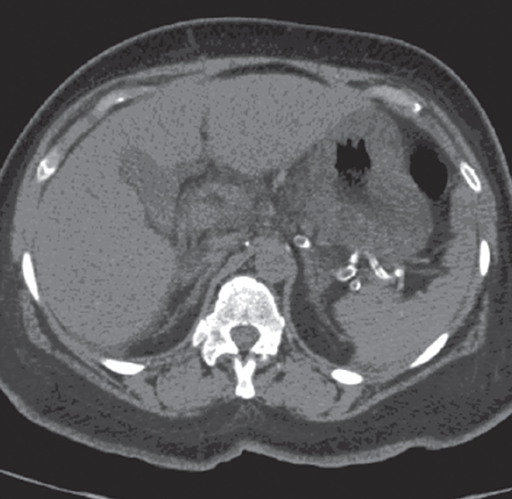 An enhanced CT scan of the abdomen and pelvis was performed due to her failure to improve.  The scan showed pneumatosis intestinalis above the right colon at the hepatic flexure with free fluid around the liver and mural wall thickening of the stomach (Figure 1). A diagnostic laparoscopy with removal of the peritoneal dialysis catheter was performed.

Intraoperatively, gross abnormality of the stomach was noted and the cecum appeared soft and normal (Figure 2). The patient experienced intermittent fever but was otherwise hemodynamically stable with an uncomplicated course until she developed acute hematemesis approximately 2 weeks later. This prompted upper endoscopic evaluation where a superficial ulcer with ischemic material was discovered in the lesser curvature of the stomach (Figure 3). 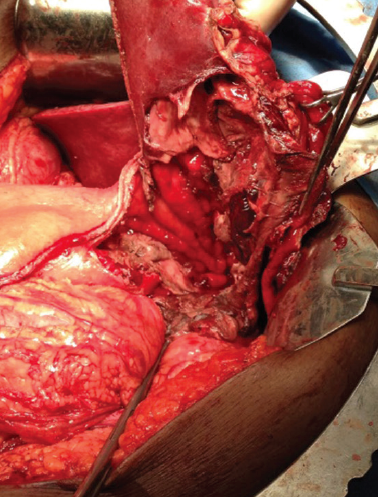 Biopsy results of the ulcer were morphologically consistent with Mucor species (Figure 4). Standard of care for suspected gastric mucormycosis includes systemic antifungal therapy with amphotericin B and urgent surgical debridement to remove necrotic tissue and decrease the spread of infection.1 The patient was started on amphotericin B and exploratory laparotomy performed revealing a grossly necrotic stomach and findings of severe acute inflammation in the right colon concerning for concomitant infection.

These findings lead to total gastrectomy and right colectomy. Pathology reports showed gastric mucosal ulceration and necrosis with fungal forms morphologically compatible with Mucor—making a definitive diagnosis of gastric mucormycosis. In the right colon, changes were consistent with those described in the gastric tissue and therefore, likely represented an associated infection.

There were minimal complications following surgical and pharmacologic intervention. The patient responded well and was transitioned to posaconazole, which has a synergistic effect when used with or following amphotericin B.1 She remained dependent on TPN during hospital stay and after discharge due to protein-calorie malnutrition secondary to her extensive surgery.

She has had no signs of recurrence. Relapse rates are unknown as most cases are unfortunately fatal due to the invasive nature of the illness and common delay in diagnosis.2 ■