Ms Williams is a medical student, Dr Riley is a resident in the department of pediatrics, Dr Silva is assistant professor of otolaryngology, and Dr Collins is associate professor of pediatrics and chief of pediatric hospital medicine, all at the University of Florida College of Medicine in Gainesville.
Disclosure: The authors have no conflicts of interest to disclose.

History. A 3-month-old boy presented to the emergency department (ED) with noisy, labored breathing and subcostal retractions that worsened when lying supine. His symptoms began 1 month earlier. At that time, the parents brought him to an outside hospital, where he was evaluated and croup was diagnosed. He received 1 dose of a corticosteroid with partial resolution of symptoms.

Three days later, he returned to the ED and was admitted. Chest radiograph findings were normal, and a bedside laryngoscopy to the level of the vocal cords confirmed no obstructive or inflammatory pathology. Croup with a possible reflux component was diagnosed, and the infant was discharged with a prescription for a corticosteroid taper and ranitidine. 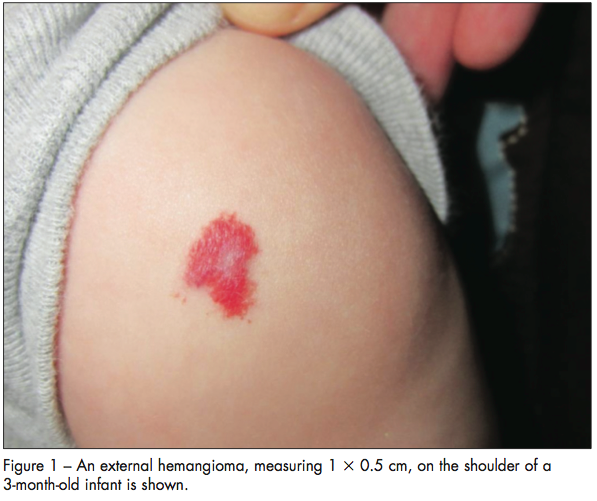 Over the next 2 weeks, the infant’s symptoms persisted and he was brought to our tertiary care institution. The mother denied any other associated symptoms. The patient was otherwise healthy and immunizations were up-to-date.

Maternal serologies, including human papillomavirus serology at birth, were negative.

Physical examination. The infant placed in the prone position was in no distress. Temperature was 36.6ºC (97.8ºF); heart rate, 172 beats per minute; respiration rate, 36 breaths per minute; blood pressure, 117/76 mm Hg; and oxygen saturation, 99% on room air. Lungs were clear to auscultation; however, there were transmitted upper airway noises.

When turned supine, the infant had significant subcostal and suprasternal retractions, grunting, and nasal flaring. Biphasic stridor was appreciated with stethoscope auscultation. Oxygen saturation levels remained within normal ranges. The oral cavity, including the posterior pharynx, was normal with no tonsillitis or drooling. The patient took a bottle well with no concurrent respiratory distress or coughing.

A 1 3 0.5-cm hemangioma was noted on the infant’s right shoulder in the deltoid region (Figure 1). The hemangioma had been present with no appreciable change since birth.

Diagnostic testing. Because of the significance of his respiratory distress, the history of “rebound” symptomatology after cessation of corticosteroid treatment, and the presence of a shoulder hemangioma, the pediatric otolaryngology team was consulted for further evaluation and management. Rigid bronchoscopy revealed a subglottic hemangioma occluding 70% to 80% of the airway (Figure 2).

Treatment. Oral propranolol, 2 mg/kg/d, and dexamethasone were started. Within 2 days, the infant’s breathing became significantly quieter and he had less frequent episodes of respiratory distress. 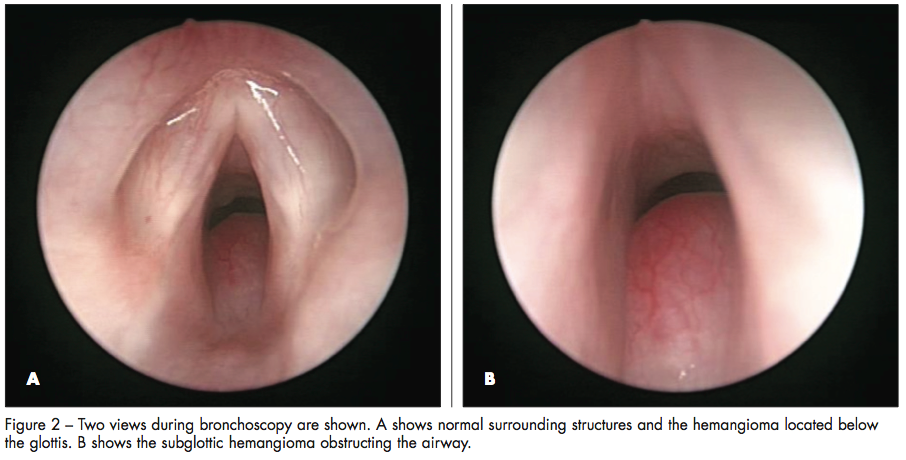 Hemangiomas are the most common pediatric tumor arising in the head and neck region. Airway lesions are of particular concern because of the potential of complete obstruction, which is most likely to occur during the lesion’s proliferation phase. Currently, regulators of hemangioma growth and involution are only partially understood. The proliferative phase typically begins when the infant reaches one month of age, at which time the most significant presenting features include biphasic stridor and respiratory distress.1

Oral corticosteroids have been suggested for the treatment of hemangiomas causing airway obstruction. Other options, including surgery, tracheostomy, and carbon dioxide laser, have been reported.

No consensus exists regarding optimal treatment.2 Nonselective ß-blockers, such as propranolol, have shown promise perhaps through their vasoconstrictive effect, which leads to a rapid lightening in color of the hemangioma and softening of its texture.3,4

OUTCOME IN THIS CASE

The infant was continuously monitored during treatment for the known adverse effects of ß-blockers, including bradycardia, hypotension, and hypoglycemia. A second bronchoscopy, 6 days after the initial evaluation, revealed a decrease in airway obstruction to 60% to 70%.

The patient was hospitalized for a total of 7 days. During that time, he was also evaluated by cardiology and ophthalmology to rule out PHACE syndrome. Results of an echocardiogram, ECG, and ophthalmologic examinations were all normal.

At discharge, the hemangioma on the infant’s right shoulder showed some central clearing. The parents were instructed to continue oral propranolol, 2 mg/kg/d, which would then be tapered by his otolaryngologist and cardiologist depending on airway improvement.