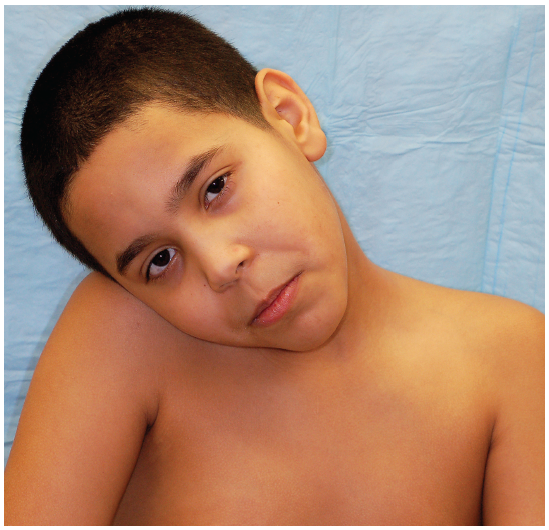 CASE: A 9-year-old boy with left-sided neck pain and stiffness is brought to your office by his mother. The pain started when the child awoke that morning; it has gradually worsened over the course of the day and is more severe when he attempts to turn his head to the left. He denies headache, fever, rash, cough, or recent trauma or illness.

The patient has no history of similar episodes. The only notable finding is a remote history of febrile seizures. His immunizations are up to date, and he does not take any medications. Both of his parents report no medical problems; there is a history of coronary artery disease, diabetes mellitus, and cerebrovascular accident in his grandparents.

Heart rate is 89 beats per minute; temperature, 36.2°C (97.2°F) (oral); respiration rate, 20 breaths per minute; and oxygen saturation, 100%. He appears uncomfortable but nontoxic and is in no distress. He holds his head tilted to the right side, and there is palpable spasm of the left sternocleidomastoid (SCM) muscle with significant tenderness. The cervical spine has decreased range of motion without midline tenderness to palpation or step-off. The oropharynx is clear without asymmetry or exudates. The patient has no facial asymmetry, has clear speech, and moves all extremities equally with 5/5 strength; sensation is intact to light touch. Heart, lung, and abdominal examination results are normal.

What is in your differential diagnosis for a child presenting with torticollis?

DISCUSSION: The child was referred to the local emergency department (ED), where a CT scan of the cervical spine was obtained. The scan was initially interpreted as negative for fracture, dislocation, or gross evidence of an infectious process. The child was discharged with ibuprofen and diazepam for symptomatic treatment.

The next day the patient’s CT scan was evaluated by the attending radiologist, who found a right C3-4 facet dislocation. The child was called back to the ED for reevaluation. A neck CT scan with contrast demonstrated a jumped facet at C3, and a kink in the vertebral artery (Figure 1) and normal alignment of the left side (Figure 2). 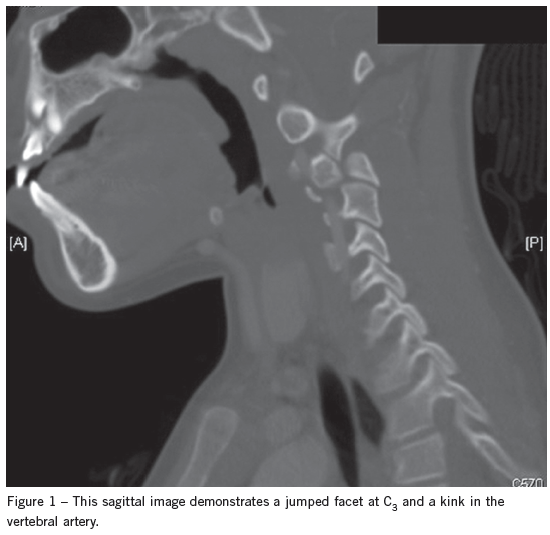 An MRI scan confirmed a unilateral facet dislocation without ligamentous disruption or cord compression. A neurosurgeon evaluated the child, who was admitted to the pediatric ICU for cervical traction and cervical collar placement. He was discharged 3 days later in stable condition. Although no history of trauma was initially given, the mother later stated that the boy wrestled with his brother nearly every day and may have injured his neck at the time of initial presentation. One month later, the child underwent C3-4 diskectomy with anterior fusion of C3-4. At that time he was noted to have congenital absence of the C4 pedicle (Figure 3). He was discharged 2 days after the operation and had no complications.

The absence of a cervical pedicle is a rare congenital anomaly often misdiagnosed as a jumped facet on initial imaging. Patients typically present with pain and spasm after minor trauma, and this may be merely an incidental finding. Misdiagnosis may lead to unnecessary surgical intervention because conservative management is often sufficient. 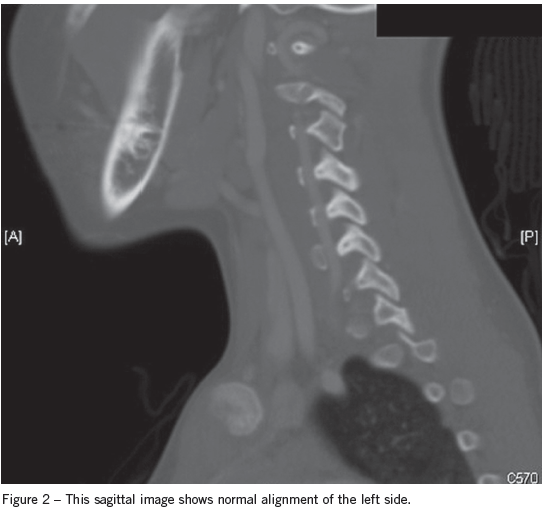 Neck stiffness or torticollis in children most often results from trauma, be it minor or life-threatening. It is important to remember that trauma may be unwitnessed during play, or deliberately not reported in the case of child abuse. Fracture or subluxation of the cervical spine is rare in young children and is usually the result of severe, high-impact trauma. In older children, life-threatening cervical spine injuries begin to approximate those of the adult population and may result from falls, motor vehicle crashes, and sports injuries.

Though still rare, subluxation is more common than fracture. Probably the most significant type in the pediatric population is atlantoaxial or rotary subluxation. Conditions such as Down syndrome, juvenile rheumatoid arthritis, and connective tissue disorders (eg, Marfan syndrome) predispose children to develop torticollis from rotary subluxation after seemingly minor trauma. This condition results from ligamentous laxity at C1-2 and most often affects children between 6 and 12 years of age. Children have pain and decreased range of motion and present with their head tilted to the opposite side of the affected SCM muscle. Patients with symptoms suggestive of atlantoaxial subluxation should be immobilized, and imaging should be obtained. The open mouth odontoid view is the most revealing; however, it may be difficult to obtain because of positioning. Treatment varies with severity—from rest and NSAIDs to cervical traction and surgical intervention.

Cervical dystonia, or spasmodic torticollis, is the most common focal primary dystonia; however, it is seen far more frequently in adults. Focal dystonia in children typically manifests in the lower extremities and may become more generalized with time. Torticollis may occur as a part of a dystonic reaction to medications; therefore, a careful review is mandatory in any patient with this presentation. Known offenders include phenothiazines and antiepileptics such as carbamazepine and phenytoin. Drug-induced dystonic reactions are typically treated with diphenhydramine and diazepam.

In a child with neck spasm and fever, investigation to rule out infectious causes, most commonly meningitis, is mandatory. Peritonsillar abscess or abscess within the deep spaces of the neck can often be overlooked. Symptoms of rhinorrhea, sore throat, trismus, or toxic appearance may be elicited. If a child’s physical examination demonstrates limitation of neck extension with lymphadenopathy or trismus, imaging should be obtained to rule out retropharyngeal abscess. 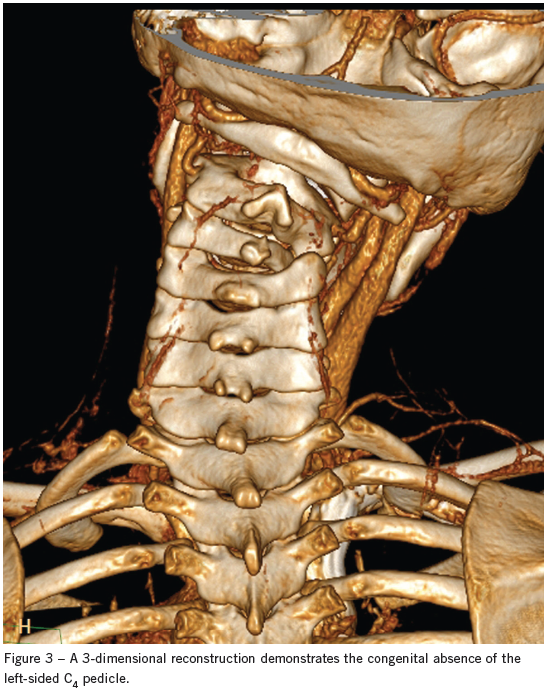 Patients with posterior fossa tumors may present with torticollis; however, this is rarely the sole presenting symptom. Patients will report other associated symptoms such as headache, vomiting, and gait and/or vision disturbances. In this case patients may have head tilt and cervical spasm due to attempts to compensate for diplopia, or from irritation of the accessory nerve by partial herniation of the cerebellar tonsils. Patients with space-occupying lesions of the spinal cord may present with torticollis and forward flexion of the head as well as neurological deficits suggestive of cord compression.n