A 75-year-old woman presented to the emergency department with a 5-day history of urinary retention, lower extremity numbness, and profound lower extremity weakness. The onset of symptoms had occurred 2 days after she had received a low cervical epidural steroid injection. 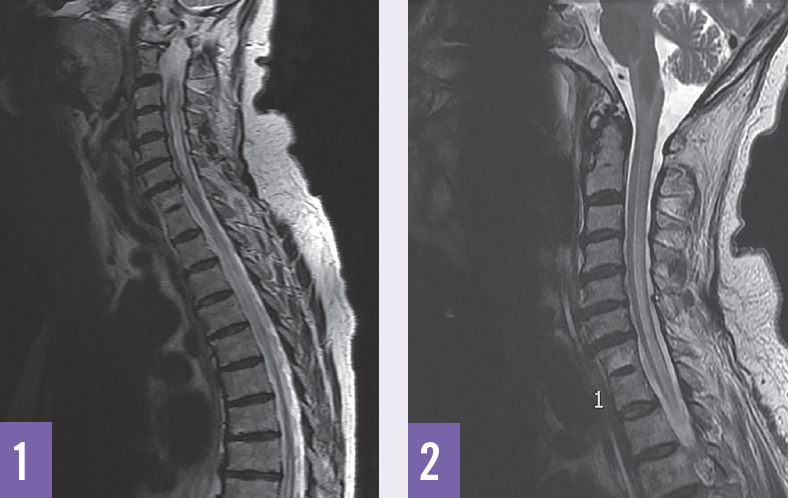 Treatment. The patient was started on empiric broad-spectrum antibiotics, antivirals, and antifungals, as well as low-dose methylprednisolone. Results of all infectious disease tests were found to be negative, at which point anti-infective treatment was discontinued. With infectious etiologies having been ruled out, her dose of methylprednisolone was increased to 1000 mg/d.

The patient’s condition continued to deteriorate. She developed flaccid quadriparesis and required intubation 8 days after symptom onset. A second MRI acquired before neurogenic respiratory failure (Figure 2) showed interval progression of the disease process. Neuromyelitis optica (NMO) antibody testing with enzyme-linked immunosorbent assay was found to be floridly positive on day 15 of her course. Subsequent to this finding, plasma exchange therapy was initiated.

After 5 treatments of plasma exchange, the patient’s examination results had not changed. However, before starting plasma exchange, a new serum sample was sent to another laboratory for repeat NMO immunoglobulin G (IgG) testing with cell-binding assay by indirect immunofluorescence, the results of which did not show detectable NMO-IgG.

Outcome of the case. After more than 1 month on a ventilator and 5 sessions of plasma exchange, the patient had shown no improvement despite maximal medical therapy. At that point, life support was removed in accordance with the patient’s and the family’s wishes. Pathology test results at autopsy revealed bilateral optic neuritis and transverse myelitis, findings that supported the diagnosis of NMO.

Discussion. NMO, also known as Devic disease or syndrome, is a severe demyelinating syndrome characterized by optic neuritis and transverse myelitis, which can be mistaken for multiple sclerosis (MS). NMO most commonly occurs in women in their 30s or 40s.1 Common signs and symptoms include progressive sensory and motor deficits, paroxysmal tonic spasms, bladder dysfunction, eye pain, and/or vision loss. Confirming the diagnosis of NMO relies on meeting 2 of the following 3 criteria: MRI evidence of a spinal cord lesion extending 3 or more vertebral segments (LETM), MRI evidence not meeting the criteria for MS, and NMO-IgG (also known as aquaporin-4 antibody) seropositivity.1 With the discovery of NMO-IgG in 2004, differentiation of this disease from MS has become more straightforward.2

Verified NMO episodes warrant immediate treatment. The aim of treatment in the acute setting is to restore neurologic function and minimize irreversible damage to the central nervous system (CNS). The first-line treatment for NMO episodes is high-dose intravenous methylprednisolone at 1000 mg/d for at least 3 to 5 days.3 Patients who do not improve with this measure should be considered for plasma exchange therapy.4 Long-term therapy aims at preventing relapsing episodes of NMO. The immunosuppressive agents azathioprine, rituximab, mycophenolate mofetil, methotrexate, prednisone, and mitoxantrone have shown benefit in preventing relapse.3,5

NMO most often occurs as relapsing episodes of optic neuritis and transverse myelitis with disabling sequelae resulting from accumulating damage of acute attacks, but it also can occur as a monophasic course.3,6 The interval duration between acute attacks is unpredictable; however, relapse occurs in 90% of patients within 3 years of the initial episode.6 More than half of patients with a relapsing course develop blindness in one or both eyes and require ambulatory help by 5 years after onset.6 The severity of the first episode, the frequency of relapses during the first 2 years, the presence of NMO-IgG, and age greater than 50 years at onset predict a more severe disease course with an increased risk of irreversible neurologic damage and death.6-8

A unique case. To date, few cases of NMO have been documented in patients older than 70 years. Furthermore, the patient initially demonstrated NMO-IgG seropositivity but upon follow-up testing did not. The reason for this is unclear, but perhaps it was related to the effect of the high-dose methylprednisolone, or because of all NMO-IgG being bound in the CNS at the time of the second test, or perhaps because of an error with one of the laboratory results.

Regardless, NMO-IgG seropositivity is not required for a diagnosis of NMO. In fact, patients with clinical and MRI evidence of NMO will be positive for NMO-IgG in 60% to 70% of cases.2,5,7 The absence of NMO-IgG on subsequent tests did not alter the management of our patient’s course.

Another interesting point about this case is the temporal association with an epidural steroid injection, which raised initial concern for an infectious etiology. As a result, initiating high-dose steroids was delayed until an infectious etiology was ruled out. It is unclear if this delay contributed to the patient’s poor outcome, but in retrospect, starting high-dose steroids sooner may have preserved neurologic function for this patient.

NMO is a rare and devastating disease. It is important to have a high index of suspicion for this disease in any patient presenting with transverse myelitis or optic neuritis. Recognizing LETM on MRI of the spinal cord, ordering NMO-IgG antibody tests early, and starting appropriate therapy as soon as possible may preserve neurologic function for patients with the condition.