A Neonate with a Widespread and Worsening Vesicular Rash

A 23-day-old boy presented with a 5-day history of worsening rash. The rash had begun as “red bumps” on his face. Over the next 2 days, the rash had spread from his face and scalp to his trunk and eventually to his extremities. His parents noticed that some of the lesions had been oozing clear fluid, and that new bumps had appeared daily. The parents denied fever or fussiness in the neonate, who continued to breastfeed well.

He was born at term via spontaneous vaginal delivery. The birth history was remarkable only for meconium-stained fluid at delivery. The mother’s group B streptococcus status was unknown, and antibiotics were not given during labor; rupture of membranes occurred 16 hours before delivery. There were no perinatal infections or complications.

The neonate had been breastfed exclusively, and the mother denied any lesions on her breasts. The mother had been vaccinated against varicella zoster virus (VZV), and the father had had chickenpox in childhood. The mother denied having any perinatal vesicular rash. There had been no sick contacts or recent travel, although the family had been exposed to a missionary group from Africa while attending church 2 weeks prior.

On physical examination, the neonate was afebrile with normal vital signs for age. He was alert and in no distress. Examination of the skin was significant for crops of vesicles on an erythematous base spread over the face, scalp, trunk, extremities, palms, and soles. The lesions were noted in varying stages of healing, ranging from tense vesicular lesions to those that had crusted over. Ulcerative lesions also were noted on the mucous membranes inside the mouth. 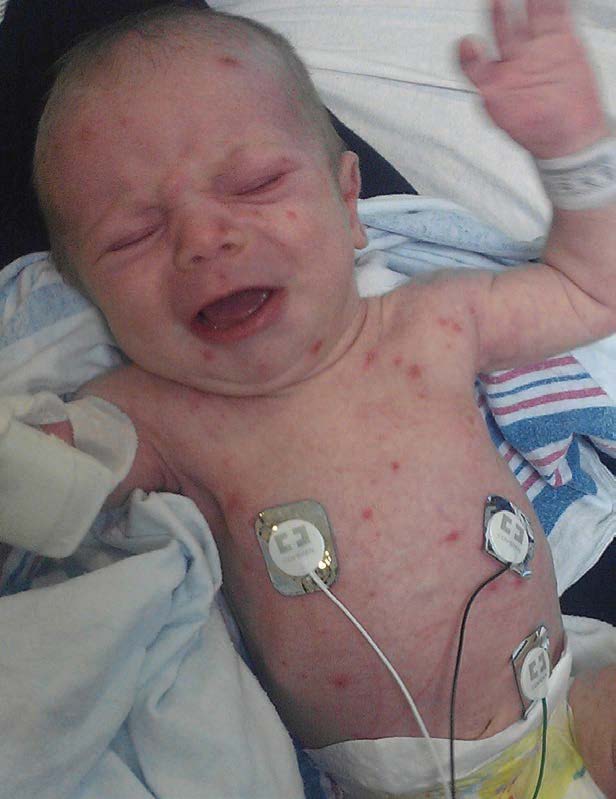 What is causing this neonate’s rash? 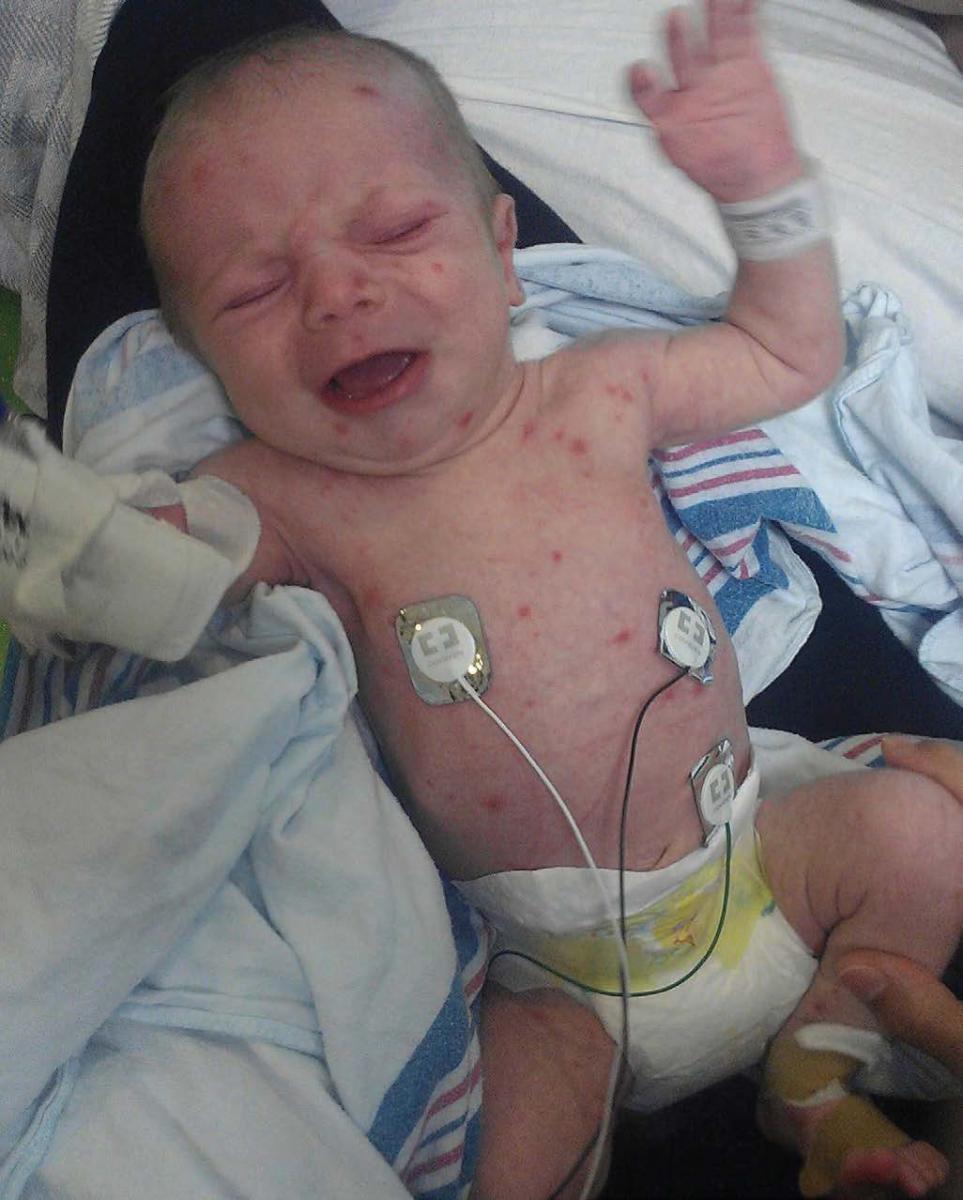 The patient underwent a sepsis evaluation, and intravenous acyclovir (60 mg/kg/d, divided every 8 h) was initiated.

Results of a complete blood count, a comprehensive metabolic panel, cerebrospinal fluid (CSF) analysis, and urinalysis were unremarkable. Blood, urine, CSF, and wound cultures had no bacterial growth. Results of polymerase chain reaction (PCR) tests of CSF and fluid from a skin vesicle were negative for herpes simplex virus (HSV). Serum VZV IgG and IgM levels were elevated, confirming a diagnosis of acute neonatal VZV infection, as well as maternal antibody transmission. On day 5 of admission, serum PCR results were positive for VZV.

Given the vesicular rash and the associated morbidity of HSV and VZV in this age group, intravenous acyclovir was initiated empirically.1,2 VZV morbidity is significantly increased when maternal infection occurs less than 5 days before within 2 days after delivery.3 This was not the case for our patient; therefore, varicella-zoster immune globulin was not prescribed.4

Exposure of newborns to nonmaternal contacts with VZV rarely results in significant disease, since most infants are born to seropositive mothers, as our patient was. These infants typically have a milder course of illness.5-7 Our patient had a more severe presentation than expected and therefore was prescribed 7 days of intravenous acyclovir followed by 7 days of oral acyclovir (30 mg/kg/d, divided every 8 h). He did well and had no complications from the VZV infection or from the treatment. 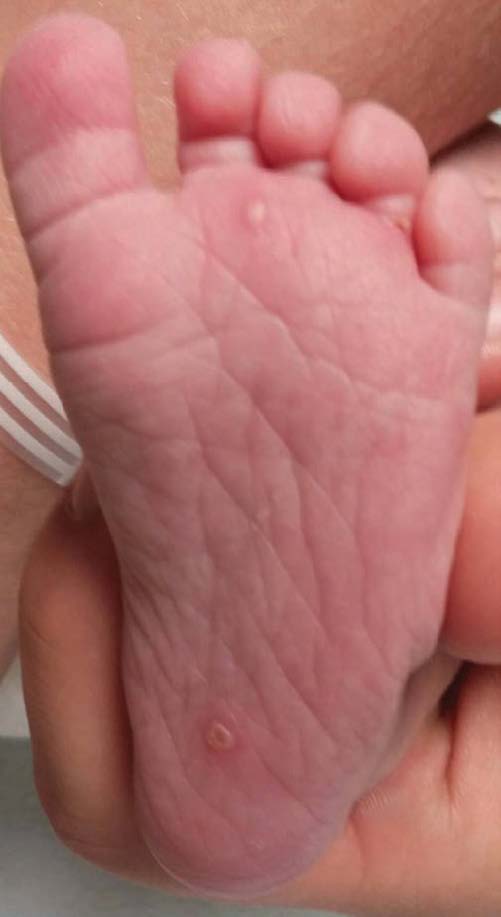 Jose Zayas, DO, is an assistant professor and director of the pediatric residency program in the Department of Pediatrics, Division of Hospital Pediatrics, at the

University of Florida College of Medicine–Jacksonville.

Shannon Brockman is a medical student at the University of Florida College of Medicine in Gainesville.

Ryan Baker, MD, is a pediatric resident in the Department of Pediatrics at the University of Florida College of Medicine–Jacksonville.

Caitlin Wainscott, MD, is a resident in the Department of Pediatrics at the University of Florida College of Medicine–Jacksonville.

Mobeen H. Rathore, MD, is a professor in the Department of Pediatrics and chief of the Division of Pediatric Infectious Diseases and Immunology at the University of Florida College of Medicine–Jacksonville. 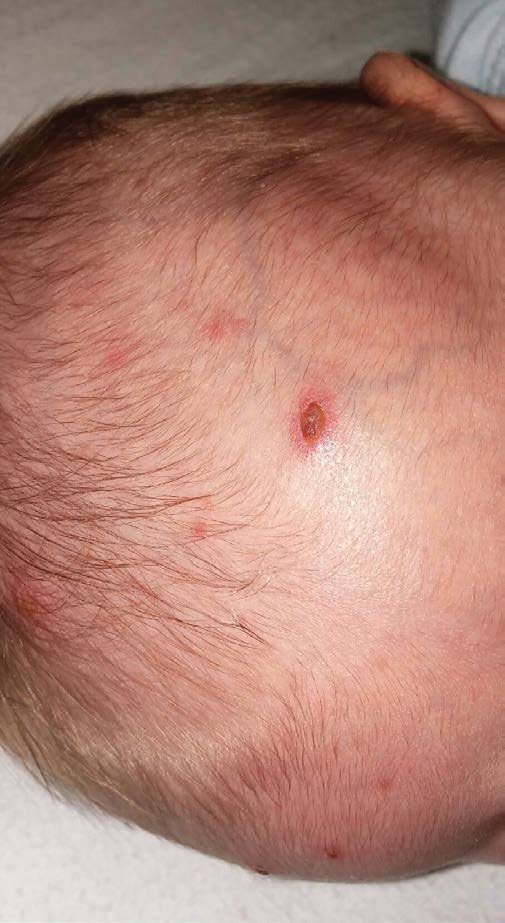