A Neonate With a Crooked Nose

A 3-day-old girl was seen for a routine postnatal discharge evaluation. The child was delivered vaginally without any trauma, and her birth history, initial hospital physical examination results, and discharge examination results were unremarkable. The girl’s mother noticed no difficulties with the neonate’s breathing, breastfeeding, or sleeping. However, on day 3 of life, the examining pediatrician observed that the neonate’s nose had asymmetric nasal apertures and a diagonal slant to the nasal columella, with its apex pointing to the right ocular inner canthus instead of the typical direction toward the nasion region of the forehead (Figure 1). 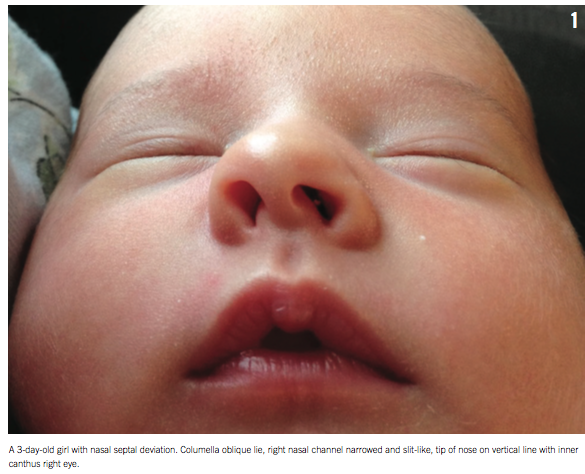 There was no obstruction to either nasal passage after occlusion of the mouth and the contralateral nasal aperture. Index finger downward pressure on the tip of the nasal pyramid seemed to reduce the obliquity of the nasal columella and did not cause a concave deformity proximal to the cartilaginous nasal tip (Figure 2). 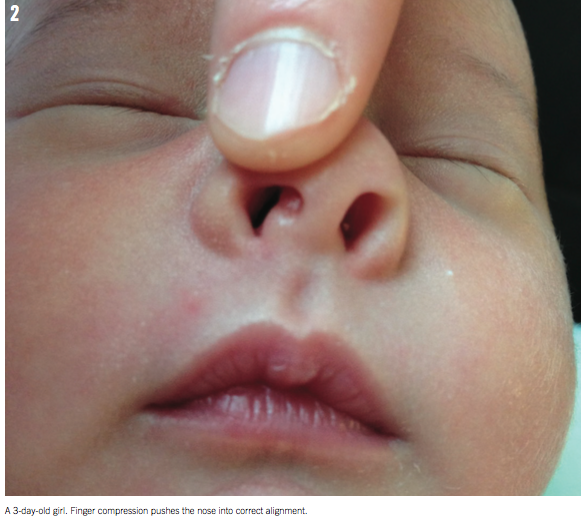 The presentation raised the possibility that the neonate had an anatomical subluxation or dislocation of the nasal septum. However, because there was no evidence of respiratory distress, a normal pulse oximeter result of 98% on room air, patent nasal airway bilaterally, and no reported problems during feeding or sleeping, we requested the opinion of several experienced pediatric otolaryngologists about recommended management.Several photographs of the columella and nasal apertures with the anterior choanae parallel to the floor and directly in front of the camera were obtained. Additional photographs were taken with the mother’s index finger denting the nasal tip directly inward. These photos were emailed to 3 experienced pediatric otolaryngologists for their opinion as to diagnosis and management.

The consensus diagnosis was deviation of the nasal septum in a neonate, most likely a transient positional deformity. The other diagnoses considered were neonatal subluxation or dislocation and septal-pyramidal deviation. Treatment included the application of surgical tape (steri-strips) from the nasal septal pyramid/vomer junction anchored to the left cheek in order to straighten the columella and widen the narrowed right nasal aperture (Figure 3). 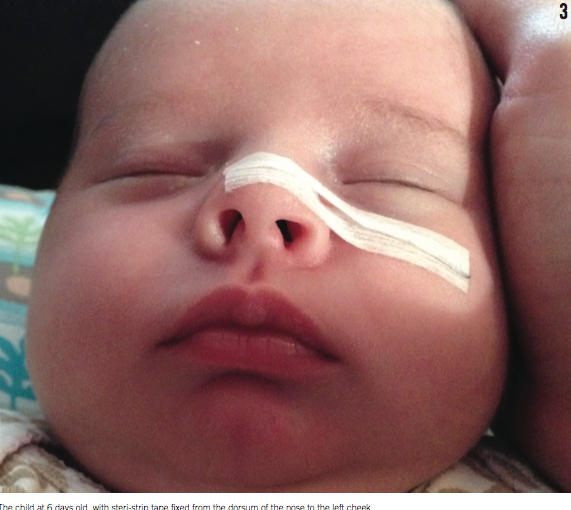 In the literature, estimates of the incidence of nasal septal deformity in newborns range from 1.9% to 4%.1 A perinatal deviation of the columella after birth is usually due to transient malposition deformity, in which pressure in utero or during vaginal birth leads to deformation of the nasal tip. The use of Metzenbaum sign (asymmetry of nostrils) and Jeppesen and Windfeld test (pressure on the tip of the nose), along with rhinoscopy are recommended to distinguish between septal dislocation and septal malposition.2,3

In cases of nasal tip deformation caused by deforming positional pressure on the nasal tip, the nasal apertures are usually, but not always, symmetric. In addition, when there is only positional nasal septal deformity, some resistance should be appreciated by application of light fingertip pressure to the nasal tip.4,5

Positional nasal dislocation is a harmless, self-limiting physical alteration not requiring manual septal relocation, though we are uncertain if the septal deformity in our patient would have resolved without the use of the steri-strip. We consulted 3 pediatric otolaryngologists and each of them recommended the steri-strip technique.

There is no consensus in the literature as to whether nasal surgery, in the form of closed reduction, is indicated in neonates with positional deformity.6 Neonatal septal subluxation is more complicated and may require the nasal septum to be manually respositioned. A minority of neonates with pathologic cartilaginous deformity of the nasal columella will have septal-pyramidal deviation, subluxation, or frank dislocation of the anterior nasal septum.

Unlike in positional deformation, when the tip of the nose is compressed gently in the presence of an anatomically dislocated cartilaginous septum, the deformity worsens. With positional deformation, the septum would stay straight, even if the nares appear uneven. In a dislocated/subluxed situation, the anterior nasal septum has an oblique lie and the bottom segment of the nose appears to be shifted. Recognition of a true nasal septal dislocation and timely referral to a specialist is important to prevent permanent deformity (Table). If an experienced pediatric otolaryngologist is consulted within 2 weeks postpartum, he/she can relocate the septum fairly easily without the need for surgical intervention. Athough some pediatric otolaryngologists recommend prompt consultation for a newborn with nasal septal malposition, the authors of this article suggest that the steri-strip method be attempted for a few days, unless a frank nasal septal dislocation is diagnosed soon after delivery. 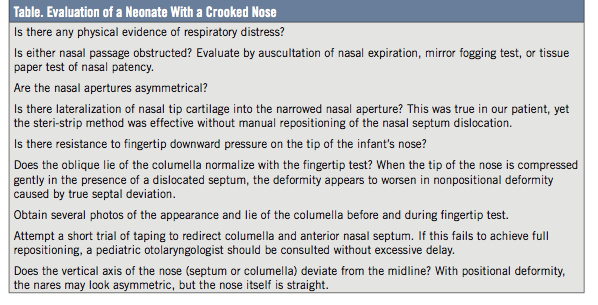 Most patients with cartilaginous deformity will experience spontaneous resolution without manipulation or surgical intervention, but an important minority will retain a cosmetic and functional deformity into adulthood. Gross anatomical deviation caused by subluxation or dislocation of the nasal septum may cause physiologic, anatomic, and cosmetic dysfunction with obstruction to air entry into the affected nasal passage, with resulting feeding, breathing, and sleeping problems.6 In addition, because newborns are obligatory nasal breathers, unobstructed nasal respiration is necessary for breathing and feeding.7 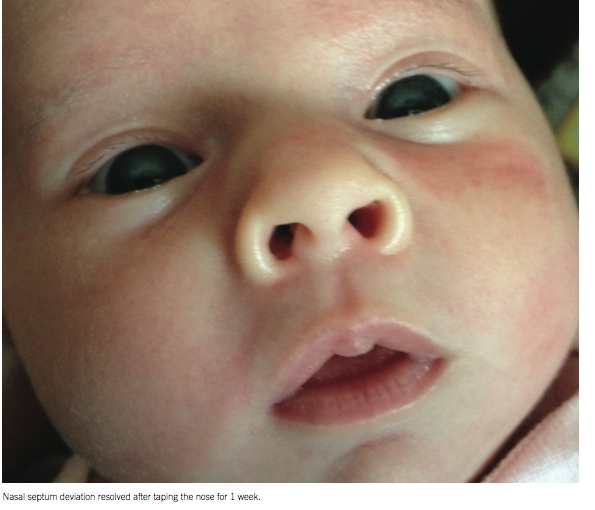 In the case of our patient, the neonate was reevaluated 11 days after the initial treatment as part of the routine well-child check that occurs 2 weeks after birth. The child’s nose was in the anatomically correct position with a straight septum and almost symmetrical nasal apertures (Figure 4). There was only a slight lateralization of the right anterior nasal cartilage, which was much improved over the previous visit. The child’s mother noted persistence of a straight nasal septum and symmetry of the anterior nasal apertures without the surgical tape when it was removed during dressing changes.

Shima Yasin, MD, is with the Department of Pediatrics at Inova Hospital for Children in Falls Church, Virginia.

Richard H. Schwartz, MD, is with the Department of Pediatrics at Inova Hospital for Children in Falls Church, and with Advanced Pediatrics, both in Vienna, Virginia.

Robert S. Bahadori, MD, is with the Department of Surgery, Section on Otolaryngology at Inova Fairfax Hospital in Falls Church, Virginia.

Joshua Kim, BS, is with Advanced Pediatrics in Vienna, Virginia.