A Neonate With a Brain Abscess Caused by Edwardsiella tarda

A 3-day-old newborn was admitted to the neonatal intensive care unit because of respiratory distress and temperature instability. She had been born at 38 weeks’ gestation via cesarean delivery to a 29-year-old healthy primigravid mother. The pregnancy had been complicated by hypertension, and the mother had required treatment with magnesium sulfate and eventual induction with oxytocin 23 hours after rupture of membranes due to a nonreassuring fetal heart rate. She had received prenatal care, and initial screening results were normal.

At birth, the newborn was vigorous, with an Apgar score of 8 at 1 minute and 9 at 5 minutes. Following an initial evaluation, the patient was transferred to the NICU because of signs of respiratory distress; her temperature was 38.8°C, heart rate was 172 beats/min, respiratory rate was 40 breaths/min, and blood pressure was 65/45 mm Hg.

Physical examination findings revealed a nondysmorphic, icteric girl in mild respiratory distress. A grade 3/6 systolic ejection murmur was heard over the left sternal border, along with mild expiratory grunting, but with no evidence of wheezing or stridor. The newborn had mild hypotonia of all 4 extremities, most likely secondary to in utero magnesium exposure. The rest of the examination findings were normal.

Cerebrospinal fluid (CSF) assessment included a WBC count of 3,950/µL, glucose concentration of 13 mg/dL, and an elevated protein level of 456 mg/dL. Gram staining of the CSF revealed many WBCs and rare Gram-negative bacilli. Results of countercurrent immunoelectrophoresis of the CSF sample were negative for group B streptococcus, Streptococcus pneumoniae, Haemophilus influenzae type B, and Neisseria meningitidis. The placental pathology report demonstrated evidence of early chorioamnionitis.

Upon admission to the NICU, the patient was treated empirically with ampicillin and gentamicin. On hospital day 2, she was afebrile and stable. Initial CSF and blood cultures grew Edwardsiella tarda, susceptible to ampicillin, gentamicin, and cefotaxime, the latter of which was added to the antibiotic regimen. Because of increasing respiratory distress, the neonate required ventilator support. Magnetic resonance imaging revealed extensive periventricular echogenic densities, severe periventricular leukomalacia, and multiple abscesses (Figures 1 and 2). 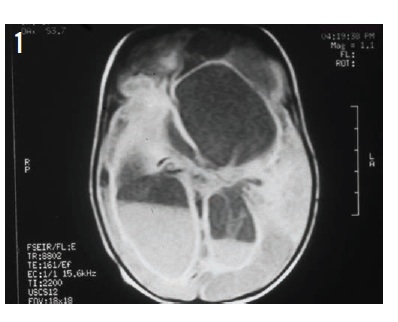 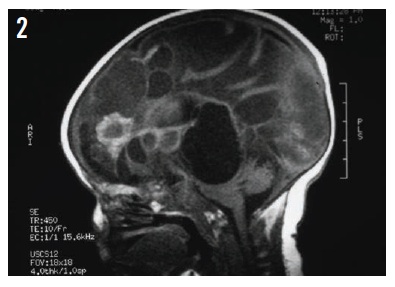 On hospital day 7, neurologic imaging studies showed signs of postinfectious encephalomalacia, hydrocephalus, right-sided ventriculitis, and porencephaly. On day 40, as a result of the coalition of the multiple brain abscesses, the obstructive hydrocephalus worsened with enlarging ventricles, requiring ventriculoperitoneal shunt placement. Electroencephalography recorded evidence of electrical seizures, and phenobarbital was initiated.

The girl eventually was discharged after a 2-month hospital stay with sequelae of a seizure disorder, right-sided hearing loss, hydrocephalus, hypotonia, and postinfectious encephalomalacia.

E tarda, a rarely isolated Gram-negative bacillus of the family Enterobacteriaceae, often is identified in patients with an underlying illness. Infection with the organism can present as bacteremia, gastroenteritis, sepsis, or localized infections.

E tarda has been the reported culprit in 4 cases of central nervous system (CNS) infections, usually manifesting as meningitis and sepsis. Other reported cases occurred in patients with underlying chronic medical conditions such as systemic lupus erythematosus. The only previously reported survivor of a CNS infection with E tarda was a 17-year-old patient with underlying sickle cell hemoglobinopathy.

Isolates from 15 countries including the United States have demonstrated the presence of E tarda in freshwater environments and cold-blooded animals, including fish, reptiles, and amphibians. More than 80% of all E tarda isolations are accomplished via stool samples, therefore, infection primarily results in gastrointestinal disease. Less than 20% of isolates are obtained from blood, urine, and wound sites.1 E tarda infection is reported most commonly during the warmer months in subtropical and tropical areas of the world such as South Asia, Africa, and Latin America.2,3 Such commonality during the warmer months may be caused by several factors: An increase in tourism to these aquatic areas, the optimal temperature for E tarda proliferation, or a combination of both.2

E tarda is categorized as a motile, catalase-positive, indole-positive, methyl red–positive, oxidase-negative, mannitol-negative, citrate-negative, and arabinose-negative organism.1,4,5 The name tarda describes the species’ inability to ferment most carbohydrates; because of its inability to ferment lactose and its production of hydrogen sulfate on enteric media, isolates require further testing to rule out Salmonella species.1 Although it is pathogenically similar to Salmonella, E tarda generally is positive for both lysine and ornithine decarboxylase activity and yields a negative Voges-Proskauer test result, which does not use citrate as the sole carbon source.6-8

E tarda typically is sensitive to antibiotics to which to Gram-negative bacteria are susceptible, such as aminoglycosides, third- and fourth- generation cephalosporins, carbapenems, and extended-spectrum penicillins. In serious invasive infections, combination therapy with an extended-spectrum cephalosporin and an aminoglycoside has been successful. Antibiotic therapy in persons with E tarda gastroenteritis usually is not indicated.9

Although Gram-negative bacilli have been known to cause CNS infections in newborns, E tarda is rarely documented as causing meningitis or brain abscesses. At initial presentation, our patient exhibited signs of bacterial sepsis, with temperature instability and respiratory distress, but without evidence of an underlying disorder or immunodeficiency. The girl’s mother denied any exposure to marine or amphibious life before or during the pregnancy. A maternal vaginal swab obtained 2 weeks after delivery revealed no growth of E tarda. Given the patient’s rapid deterioration soon after birth and the severity of the infection based on imaging and CSF test results, the neonate’s infection appears to have started in utero.

E tarda not only can cause gastroenteritis but also must be considered in neonatal CNS infections, especially in patients with immunodeficiency or other underlying condition. Although the organism has a relatively low virulence and high susceptibility to antibiotics, CNS infections can be devastating to the neurologic architecture and can progress to overwhelming sepsis. In such cases, early diagnostic radiology studies such as computed tomography or magnetic resonance imaging are warranted. n

Theodore Wu, MD, completed his pediatric residency at the University of Nevada School of Medicine in Las Vegas.

Sipong Patamasucon, BA, is a student at the University of Sint Eustatius School of Medicine in Cole Bay, Sint Maarten.

Harsha K. Chandnani, MD, is a resident in the Department of Pediatrics at the University of Nevada School of Medicine.

Pisespong Patamasucon, MD, is an associate professor in the Department of Pediatrics at the University of Nevada School of Medicine.