Neonatal Seizure as the Presenting Manifestation of Incontinentia Pigmenti

A girl was born to a 29-year-old, gravida 2, para 0 mother at term via normal spontaneous vaginal delivery. The mother initially had had an uncomplicated postpartum course at a community military hospital. The mother had had appropriate prenatal care and had experienced no significant pregnancy complications or comorbidities, but she was known to be positive for group B streptococci based on vaginal swab results and had been treated adequately with penicillin greater than 4 hours before delivery.

At delivery, the newborn weighed 3,360 g and had an Apgar score of 9 at 1 minute and 9 at 5 minutes. On initial examination, the girl displayed a 1.5-cm ovoid coalescence of yellowish, crusting patches with an erythematous border on her right lower extremity (Figure). A similar, smaller lesion was noted on the dorsum of the right hand. There were no other significant findings on initial examination. 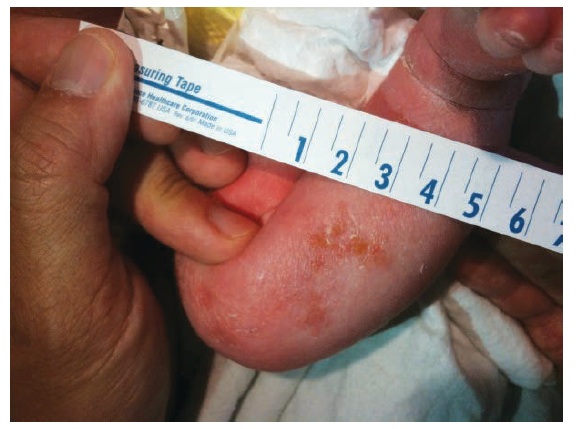 Dermatology was consulted, and it was determined that the skin findings likely were benign; a follow-up visit was planned for 2 weeks after discharge, with daily moisturizer use in the interim. The first 24 hours of the newborn’s hospital stay were unremarkable, including appropriate voiding, stooling, and feeding, as well as normal weight loss and low-risk bilirubin levels.

On the second hospital day, the father reported that the patient that morning had exhibited rhythmic contractions of both legs lasting for 30 to 60 seconds. These movements had occurred several times since initial onset. The parents also noted that the lesion on the neonate’s right hand seemed to have worsened overnight.

On examination, normal handling of the infant provoked intermittent rhythmic clonic movement of the arms and legs of 30 to 60 seconds’ duration, despite the patient’s remaining alert and responsive to external stimuli. The girl also displayed a prolonged startle reflex of well over 30 seconds when provoked. This clinical picture raised an immediate concern for seizure-like activity with an infectious etiology. Blood cultures, a complete blood count (CBC), a chemistry panel, and cerebrospinal fluid (CSF) analysis for cultures, glucose/protein, cell count, polymerase chain reaction (PCR) tests for herpes simplex virus and varicella zoster virus were sent. Intravenous access was obtained, and ampicillin, gentamycin, and acyclovir were started.

The patient was transferred to a tertiary-care facility, where pediatric neurology was consulted immediately upon admission. The patient’s electroencephalogram (EEG) displayed continuous subclinical seizure activity requiring sedation, intubation, and administration of phenobarbital and midazolam for seizure control.

All initial serum and CSF tests returned with normal results, except for a decreased bicarbonate level at 16 mEq/L with an anion gap of 18.8 mEq/L. The tertiary hospital redrew all of the laboratory tests, and all had similar results. A metabolic disorder was postulated as the source of the seizures; later, this was deemed unlikely in light of unremarkable newborn screen results and normal CSF amino acid, lactic acid, and pyruvate values. Further workup included brain magnetic resonance imaging (MRI), the results of which showed multifocal regions of increased T2 signals in the cortex and the white matter of the frontal, parietal, and temporal lobes bilaterally.

Genetics was consulted, and after careful review, a presumptive diagnosis of incontinentia pigmenti (IP) was made. Genetic testing later confirmed this diagnosis, showing a nonsense mutation of a nucleotide (c.289C>T) in exon 6 of the IKBKG gene, leading to a premature stop codon at amino acid position 299 (p.Q299X). Although it has not been described previously, this mutation is predicted to be responsible for IP. Skin biopsy also later confirmed the diagnosis.

Other clinical manifestations can include alopecia, hypodontia, abnormal tooth shape, and dystrophic nails. Ophthalmologic issues can present as neovascularization of the retina that predisposes to retinal detachment. Seizures, cognitive delays, and intellectual disability can manifest later in life.

Genetically, IP has an X-linked inheritance pattern and is embryonically lethal in many males. Identification of the presence of IKBKG gene mutation is the test of choice, since a deletion of exons 4 through 10 of IKBKG is present in about 80% of affected individuals.1

Our patient had a heterozygous mutation that was thought to be disease-expressing given her clinical manifestations and test results. She is now on scheduled phenobarbital and levetiracetam for seizure prophylaxis and has had no clinical recurrence since her initial hospitalization. Along with regular visits to her general pediatrician, the girl receives regular pediatric neurology and ophthalmology specialty care.

Seizures in newborns have an incidence of approximately 1 to 3 per 1,000; relative to other age groups, seizures occur more often in this population. All of the many etiologies of seizures in the neonate lead to paroxysmal alterations in neurologic function caused by abnormal synchronous depolarization of cortical neurons. This phenomenon can result either from a failure of the ATP-dependent sodium-potassium pump or from an imbalance of inhibitory and excitatory neurotransmitters. The neonatal brain is more susceptible to these energy shifts than the adult brain owing to the combination of a predominance of excitatory neurotransmitters and immature inhibitory systems. Generally, this combination rarely results in well-organized, generalized tonic-clonic seizures because of the cortical organization these require. Thus, seizures in the neonate might be more difficult to identify, since they more commonly manifest as oral-buccal-lingual movements, oculomotor phenomena, or apnea.

Initial management focuses on maintaining airway, breathing, and circulation. Resuscitation sometimes is required. In stabilized patients, intravenous access should be established and maintained for serum laboratory studies and medication administration.

Initial laboratory tests generally should include assessment for metabolic derangements and infection. A CBC, blood culture, chemistry panel (including serum ammonia, magnesium, and phosphorus), point-of-care glucose test, blood gases, and liver function tests, along with CSF analysis of culture, viral PCR, cell count, and glucose and protein levels, should be included in the investigation. These studies might provide information on infection and treatable electrolyte abnormalities such as hyponatremia, hypocalcemia, hypomagnesemia, and hypoglycemia. Additionally, cardiac disorders rarely may present with seizure activity as result of a hypoxic insult. Bedside testing with 4-limb blood pressure and preductal and postductal pulse oximetry can be used as a simple, noninvasive screening tool, with further testing with echocardiography as needed.

EEG can be performed when available. Cranial ultrasonography at the bedside can provide useful information about the presence of intracranial hemorrhage, although views are limited. Computed tomography (CT) can allow assessment of areas not accessible via cranial ultrasonography and also may be performed quickly. CT, however, lacks the sensitivity of brain MRI in identifying subtle cortical malformations.

Brain MRI is recommended in the nonemergent setting and can be helpful in diagnosis and prognostication of hypoxic brain injury or congenital brain malformation. The optimal timing of MRI from onset of seizures is controversial. On the one hand, diffusion-weighted MRI might help identify the extent of injury earlier, at 2 to 3 days after seizure onset. However, conventional MRI during the second week of life can offer a better prognosis about future impairment based on the extent of injury to the basal ganglia and thalamus.

Intracranial hemorrhage accounts for 15% of cases of neonatal seizures. Subarachnoid hemorrhages occur most commonly in term infants and usually present on the second day of life as seizures and apnea with resolution during interictal periods. Typically, the seizures subside as the hemorrhage heals. In contrast, hypoxic-ischemic encephalopathy is more of a concern when seizures present on the day of birth and the patient does not appear well between seizures. When intraventricular hemorrhage is present, seizures typically manifest if the hemorrhage also involves the parenchyma or if there is corresponding ventricular dilation. The presentations in these cases are either generalized tonic activity or subtle seizure activity. Subdural hemorrhages usually result from trauma related to large infant size, breech delivery, or the use of instrumentation, and they can be associated with cerebral contusion. These seizures have a focal presentation and occur in the first 48 hours after injury.

Because intracranial infections account for 5% to 10% of neonatal seizures, all newborns with seizures should be treated for the most common causes of bacterial meningitis (group B streptococci and Escherichia coli). First-line treatment for these bacteria are ampicillin and cefotaxime or gentamicin dosed at meningitic levels. In addition to treatment for possible bacterial meningitis, viral CNS infection should be covered in the initial treatment phase with acyclovir while awaiting viral PCR results from CSF studies.

Intravenous phenobarbital is the most widely used first-line antiseizure medication, which by itself completely controls seizures in approximately 40% of cases, and when combined with fosphenytoin controls 60% of seizures. The use of high-dose phenobarbital at 40 mg/kg may achieve up to 85% seizure control.4,5 Benzodiazepines also have been shown to effectively control neonatal seizures, and they have the benefit of early onset of action. Additionally, newer agents such as levetiracetam and bumetanide increasingly are being used, although data from controlled trials are lacking.

Estimates of morbidity associated with neonatal seizures vary from as low as 10% to as high as 60%. Neonatal seizures may increase the risk for cerebral palsy, intellectual disabilities, or epilepsy.6-8 Gestational age and underlying etiology play important roles in predicting future outcome for infants with neonatal seizures. Quality obstetric management and a focused approach to controlling seizure activity in the newborn also play key roles in the prevention and amelioration of possible adverse outcomes.