Necrotizing Pneumonia in a Child Immunized With PCV7 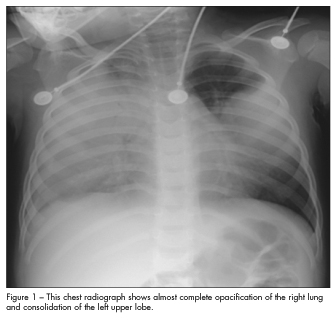 A 3-year-old Hispanic boy with up-to-date immunization status and no significant medical history had fever, cough, right upper quadrant abdominal pain, vomiting, and shortness of breath for the past 5 days. He had received 4 doses of the heptavalent pneumococcal conjugate vaccine (PCV7) before July 2009, the date of presentation.

On physical examination, the patient was in severe respiratory distress and grunting; respiration rate was 80 breaths per minute and oxygen saturation was 85% on room air. Decreased air entry and crackles were noted on the right side. A chest radiograph revealed almost complete opacification of the right lung and consolidation of the left upper lobe (Figure 1).

Bilateral pneumonia was diagnosed, and the child was admitted to the pediatric ICU. Treatment with bilevel positive airway pressure and intravenous ceftriaxone, vancomycin, and azithromycin was initiated. On hospital day 2, the WBC count showed an increase in bands to 46%. Streptococcus pneumoniae serotype 19A resistant to penicillin but sensitive to vancomycin was isolated from the blood culture on admission. 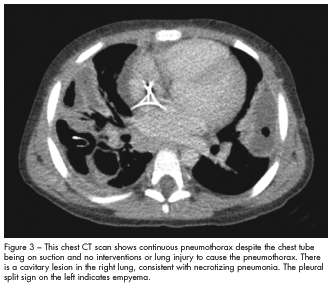 The hospital course was complicated by bilateral pleural effusions with empyema that required bilateral chest tube placement. Repeated video-assisted thoracoscopic surgery with decortication revealed massive necrotizing pneumonitis with abscesses on pathology tissue examination (Figure 2). The patient’s condition was further complicated by a bronchopleural fistula in the right lung that was managed conservatively (Figure 3). He received 21 days of vancomycin and 28 days of ceftriaxone. After 34 days in hospital, he was discharged with instructions to complete high-dose oral amoxicillin/clavulanate at home.

Virulence factors. S pneumoniae is the most common cause of pneumonia in children. S pneumonia, the gram-positive, lancet-shaped, α-hemolytic cocci, is usually seen in pairs (diplococci) or chains. Several S pneumoniae virulence factors have been identified. One is the exotoxin, pneumolysin, which is a pore-forming protein that not only disrupts mechanical barriers but also affects phagocytes and other immune cells via its direct cytotoxic effects. The major S pneumoniae virulence factor is its capsule, which is essential to resist complement-mediated (C3b) opsonophagocytosis of the bacteria. More than 90 immunologically distinct serotypes of pneumococci that differ in their polysaccharide capsule structure have been isolated.

Efficacy of PCV7. Capsular polysaccharides were used in production of the PCV7, which contains polysaccharide conjugates of serotypes 4, 6B, 9V, 14, 18C, 19F, and 23F. These serotypes were known to cause 80% of invasive pneumococcal disease (IPD) and the majority of noninvasive disease.1 Since PCV7 was approved for use in February 2000, several studies that evaluated its long-term direct and indirect effects found a substantial reduction in the incidence of IPD among children younger than 5 years.2 The incidence of vaccine-type IPD dropped from 80 cases per 100,000 to 4.6 per 100,000. The overall incidence of IPD, which includes vaccine and nonvaccine serotypes, declined by 75%.2 Use of the vaccine also reduced IPD among unvaccinated populations through reductions in nasopharyngeal colonization and transmission of vaccine-type pneumococci from vaccinated children (ie, herd effects of PCV7).

In 2005, serotype 19A was the most common cause of IPD in the United States. Among children younger than 5 years, the incidence of IPD caused by serotype 19A increased from 2.6 cases in 1998-1999 to 9.3 cases per 100,000 in 2005, the highest rise for any single serotype.5 Serotype 19A is structurally similar to the vaccine serotype 19F; however, PCV7 does not provide cross immunity.6

Penicillin resistance in serotype 19A has increased from 7% in 1998 to 35% in 2005.7 Alteration of the bacteria’s penicillin-binding proteins lowers its affinity for ß-lactam antibiotics. Of note, vancomycin-resistant S pneumoniae has not been reported in the United States. Another mechanism of antibiotic resistance is mutation and selection that is enhanced by the rapid growth rate. Some strains are capable of capsule switching and transform from one serotype to another.

In our patient, no organisms were isolated from repeated cultures of the parapneumonic empyema despite invasive bacteremia with S pneumoniae. This may be explained in part by the initiation of intravenous antibiotics before the first chest tube was placed and pleural fluid sent for culture. In addition, it has been described in the literature that non-PCV7 serotypes are more likely to coincide with culture-negative empyema.8

Had this child presented on or after February 2010, when the 13-valent pneumococcal conjugate vaccine (PCV13) was approved by the FDA and recommended for routine use over PCV7, he would have been vaccinated with PCV13 before discharge. PCV13 contains serotypes 1, 3, 5, 6A, 7F, and 19A in addition to the PCV7 serotypes and, it is hoped, will cover the serotypes responsible for the current rise in empyema.

A recent report from the CDC indicated that from March 2010 to June 2011 only 37% of PCV7-vaccinated children received the PCV13 supplemental recommended dose.9 This low rate explains the persistent occurrence, to date, of PCV13-type IPD among children completely vaccinated with PCV7. The CDC urged health care providers to think of every pediatric visit as an opportunity to administer the supplemental dose of PCV13 to all age-eligible PCV7-vaccinated children to increase PCV13 coverage.

Because serotype replacement is an active and dynamic process, monitoring the epidemiology of newly rising strains in those immunized with PCV13 is crucial. Furthermore, development of alternative vaccines targeted against other pneumococcal proteins, such as pneumolysin, may provide immunity against many, if not all, pneumococcal serotypes.