Last month we reviewed the case of CD, a 63-year-old white female who was diagnosed with chronic obstructive pulmonary disease (COPD) and initiated on tiotropium. Since starting this medication, she is feeling better, but after 8 months of treatment she experienced a COPD exacerbation following a viral upper respiratory tract infection. She returned to her primary care practitioner 1 month after her exacerbation for consideration of additional treatment options.

As CD experienced her second COPD exacerbation within 12 months her risk stratification per the Global Initiative for Chronic Obstructive Lung Disease guidelines has shifted from Category B to Category D, prompting an escalation in her treatment in order to reduce her risk for future exacerbations and improve her symptoms of COPD.1 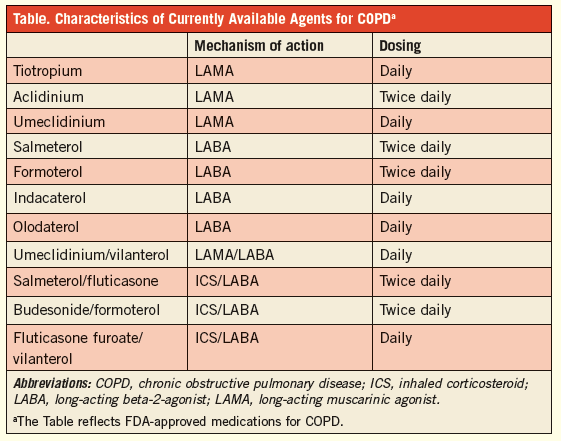 Do these potential advantages make these new agents the preferred first-line agents for the treatment of COPD, to be used in place of the “conventional” inhaled medications?

Multiple agents have been approved for the treatment of COPD (Table). Each agent and each formulation has potential advantages over conventional treatment options. However, these advantages are often related to pharmacokinetic properties (eg, reducing the number of daily inhalations required) or the creation of novel combinations of medications; such advantages must be considered in the context of the relative efficacy compared to the conventional treatments.

All of the novel agents and novel combination products utilized trough forced expiratory volume in 1 second (FEV1) as their primary outcome measure in their pre-marketing clinical trials. Trough FEV1 measures the FEV1 immediately prior to the next scheduled dose (eg, when the medication concentration levels would be at their lowest or their trough). The minimal clinically relevant difference in trough FEV1 values is considered to be 100 mL; values less than this are unlikely to be symptomatically perceived by patients.2 Additional study outcomes included questionnaires assessing health status, symptoms, and/or quality of life. Exacerbation rates were inconsistently used as a secondary outcome and many trials utilized placebo as a comparator.

While trough FEV1 represents a relevant clinical outcome in terms of patient symptoms, it likely fails to capture the main goal of COPD treatment—prevention (or delay) in exacerbations. An ideal agent would reduce both exacerbations and improve symptoms. However, given the significant morbidity and mortality associated with COPD exacerbations it may be the more valuable clinical endpoint compared to improvements in questionnaires and surveys.

One final important consideration is the duration of the studies evaluating the novel agents: Most studies were 12 to 26 weeks in duration with few studies lasting between 48 and 52 weeks. As COPD is a chronic condition, the limited long-term outcome data for these agents is a potential drawback that should be taken into account when considering these agents.3,4

Perhaps, the most significant advantage is the novel combinations. Previously 2 separate medications were needed when utilizing a LAMA and a LABA, a treatment option for Stage B, C, and D patients. The umeclidinium/vilanterol combination provides a once-daily LAMA + LABA product that is also less expensive than the individual LAMA and LABA products that would have been needed previously.

Given our patient’s recent exacerbation, a step-up in therapy is likely indicated. The addition of a LABA or a LABA + ICS should likely be considered in addition to CD’s current LAMA treatment. The conventional options as well as a novel agent or combination should be considered. If a novel combination is considered, the choice behind this selection should likely be driven solely by convenience factors—once-daily dosing or a combination LABA + LAMA may reduce costs and number of individual inhalers needed. It is important to note that the benefits in terms of efficacy are not demonstrated with the novel agents and combinations; furthermore, long-term efficacy of these agents is unclear given the relatively short duration of the clinical trials.

If LABA monotherapy were to be added to CD, then discontinuing tiotropium and starting umeclidinium/vilanterol makes sense as it would be a single inhaler taken once daily as opposed to 2 inhalers (LAMA and LABA), with the LABA potentially needing twice-daily administration if a conventional agent were to be selected. If a LABA + ICS combination were to be added, a novel agent could also be considered for the convenience of once-daily administration, although efficacy concerns again would need to be considered.

We would prefer to start with conventional treatments given their documented efficacy and long track record of clinical success in reducing the risk for exacerbations or delaying their occurrence, which likely represents the most important consideration of therapy. If costs concerns for the combination of LABA + LAMA or issues related to compliance arise with the conventional treatments, then the novel agents or combinations could be considered at that point.

Eric A. Dietrich, PharmD, BCPS, graduated from UF College of Pharmacy in 2011 and completed a 2-year fellowship in family medicine where he was in charge of a coumadin clinic. He now works for the UF Colleges of Pharmacy and Medicine.