A girl was born at term with an uneventful prenatal and perinatal course. Her physical examination findings were normal except for the presence of 2 mandibular central incisor teeth. The teeth were opaque white at the tips. They were attached to the gum by soft, pink tissue resembling the gingival tissue, and both teeth were mobile. There was no edema of the gingiva.

The infant was feeding well and had no problems with latching on or sucking. She was given vitamin K as a part of routine newborn medical care.

On Day 2 of life, the teeth were extracted manually without anesthesia. Hemostasis was achieved by applying local pressure. The patient tolerated the procedure well and did not require analgesics. The extracted teeth had a crown but lacked roots. The newborn was evaluated in the clinic 7 days later, at which time she was doing well. 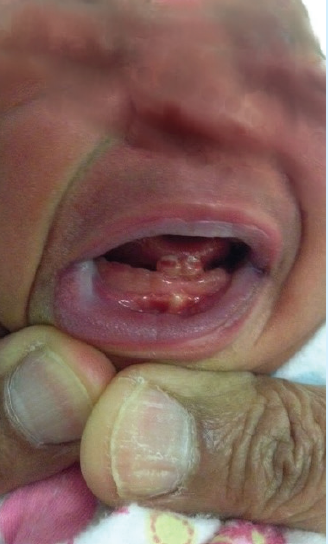 Normal eruption of teeth takes place approximately at the age of 6 months. The presence of dental tissue at birth, termed natal teeth, was first described in 1950, and numerous reports have been published since then.1 Massler and Savara2 were the first to use the term natal teeth for those present at birth and neonatal teeth for those erupting in the first 30 days of life.

For centuries, natal teeth have been associated with many superstitions and folklore. The Chinese, for example, considered the presence of natal teeth a bad omen, whereas the Malaysians believed it to herald good fortune. In England, its presence was believed to guarantee conquest of the world.3

Natal teeth are 3 times more common than neonatal teeth. The incidence of natal and neonatal teeth ranges from 1 in 2,000 to 1 in 30,000 full-term births.4 It occurs with equal frequency among boys and girls, although some authors have observed a female prediliction.5

The mandibular primary central incisors are affected most commonly (85%), followed by the maxillary incisors (11%). Natal teeth usually occur in pairs.6 In 90% to 99% of cases, these teeth are precociously erupted from the normal complement of primary teeth.7 A few reports of multiple natal teeth have been published in the pediatric dentistry literature.8,9

Natal teeth are small or of normal size. They can be normally shaped or conical, and the color can be yellowish brown to whitish opaque. They may exhibit enamel hypoplasia and small root formation. They are attached to a pad of soft tissue above the alveolar ridge and occasionally are covered by mucosa. They have exaggerated mobility and carry the risk of being swallowed or aspirated.7,11,12 If the degree of mobility is more than 2 mm, they usually require extraction.6,7,13

Natal teeth also can lead to discomfort during sucking, laceration of the mother’s breast, and sublingual laceration with resultant feeding refusal.6 They also can be associated with ulceration on the ventral surface of the tongue due to constant trauma (Riga-Fede disease).14

Bohn nodules and epulis could be confused with natal teeth. Bohn nodules are remnants of mucus-gland tissue found along the buccal and lingual aspects of the mandibular and maxillary ridges. They have a rice-like appearance and are asymptomatic. Bohn nodules usually are shed spontaneously within several weeks. Epulis is a tumor-like growth in the gum that can be sessile or pedunculated.

Other differential diagnoses include lymphangioma and hamartoma of the alveolar ridge.6

The diagnosis can be established at birth by clinical examination of the oral cavity and by radiographic evaluation to rule out supernumerary teeth.

If the natal or neonatal teeth are asymptomatic and are not interfering with the infant’s feeding, no intervention is necessary. If the teeth are supernumerary or excessively mobile and thus associated with a risk of aspiration, extraction is indicated.6,13 Prophylactic administration of vitamin K is advocated before extraction because of risk of hemorrhage.

Extraction should be done very carefully to avoid trauma. Dental follow-up should occur after extraction for curettage of the tooth sockets to prevent development of dental papillae and malocclusion of permanent teeth.1,6,7

Although natal teeth are uncommon, it is not unusual for pediatricians to encounter a few cases in their clinical practice. Because this condition can be associated with superstitious beliefs and parental apprehension, it is necessary to educate parents. It is also important to recognize the risks and complications of natal or neonatal teeth and to educate families about periodic dental follow-up to ensure healthy teeth.