Myocarditis With Complete Heart Block: Challenges in Diagnosis and Treatment

ABSTRACT: Children with acute myocarditis often present with dyspnea at rest, exercise intolerance, syncope, tachypnea, tachycardia, and hepatomegaly. Various arrhythmias, complete heart block, and tachycardia with metabolic acidosis may be present. Fulminant myocarditis is associated with acute onset of cardiovascular compromise. ECG may show sinus, atrial, and ventricular tachycardia and, occasionally, varying degrees of heart block, including complete heart block. Cardiac enzyme levels are frequently high. Findings on echocardiography to assess left ventricular function may be indicative of the severity of myocarditis and may have prognostic implications.

Myocarditis, or inflammation of the myocardial muscle, is a rare potentially fatal disease in children. It can result from multiple causes, including infection, exposure to cardiac toxins, and autoimmune disease. Viral infections, especially those caused by enteroviruses, are the most common causes of myocarditis in children and adolescents. The clinical manifestations of myocarditis are nonspecific and can be acute or chronic, although most children with myocarditis have an acute presentation. Its occurrence can be sporadic; however, epidemic clusters and seasonal and geographic variations have been reported.1,2

Here, I present a case of fatal fulminant myocarditis with complete heart block and review the clinical and management aspects of the condition in children.

A 13-year-old girl was brought to the emergency department (ED) after a second episode of syncope within the past 2 days. The first episode, which was described by the family as very brief, perhaps less than 5 seconds, occurred at home and was not preceded by any palpitations or prodromal symptoms. The second episode occurred at school during her regular physical activity and lasted about 30 to 40 seconds. The patient had no significant medical or family history. Height and weight were average for age. She had been an active child and participated in school sports without any complaints of dizziness, dyspnea, palpitations, or chest pain. She had no recent illnesses or symptoms suggestive of a viral illness and no recent immunizations. She was not taking any medications.

In the ED. The patient was awake and oriented, with a supine blood pressure (BP) of 86/64 mm Hg, heart rate of 78 beats per minute, respiration rate of 20 breaths per minute, and temperature of 36.4ºC (97.6ºF). When the patient was asked to stand, she had a near-syncopal episode. Her sitting BP dropped to 63/44 mm of Hg, without any significant increase in heart rate.

Telemetry monitoring was immediately established and showed brief episodes of bradycardia, like the one shown in Figure 1. An intravenous fluid bolus was given with improvement in symptoms.

A chest film showed no cardiomegaly or pulmonary congestion.

Hospital course. The patient was admitted to the pediatric ICU, where an ECG indicated complete heart block and the development of myocardial necrosis (Figure 2). A stat echo---cardiogram was also performed. This showed global left ventricular hypokinesia, with an estimated ejection fraction of 15% to 20%. Serum complement levels (C3 and C4) were within normal limits, and polymerase chain reaction (PCR) analysis was negative for Enterovirus RNA. 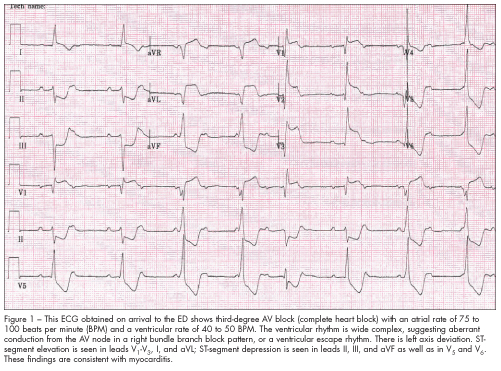 Pediatric cardiology was consulted. Complete heart block secondary to myocarditis was diagnosed, and treatment with dobutamine and milrinone was started.

The patient initially responded well to treatment, with a heart rate of 120 beats per minute and normalization of supine BP. However, she continued to have transient episodes of complete heart block; in one instance, atropine, 0.5 mg IV push, was required. Eight hours post admission, ventricular tachycardia developed, and the patient’s pulse was lost. Despite all resuscitative efforts, she could not be revived and died 2 hours later.

An autopsy was requested by the admitting team. Unfortunately, the family declined it. n

The true incidence of myocarditis in children is unknown. This is, in part, because there are no sensitive and specific diagnostic tests for the condition, also its presentation is very variable. In one retrospective study from a tertiary Canadian center, the estimated prevalence of myocarditis was 0.5 cases per 10,000 visits.3

Multiple causes have been attributed to the development of myocarditis in children (Table). In infants and children who died of sudden cardiac death, inflammatory infiltrates in the myocardium have been found in 3% to 40% on autopsy.4-8

The clinical presentation of myocarditis is diverse. The plethora of signs and symptoms on presentation ranges from acute and fulminant to chronic and insidious. Clinical manifestations also vary depending on the cause. Viral myocarditis frequently manifests as a prodrome of fever, myalgia, and malaise several days before heart failure. Infants may have fever, lethargy, poor feeding, diaphoresis with feeding, and failure to thrive.

Children with acute myocarditis often present with dyspnea at rest, exercise intolerance, syncope, tachypnea, tachycardia, and hepatomegaly.9-12 Predominant respiratory symptoms often lead to the incorrect initial diagnosis of lower respiratory tract infection.3 Patients may have chest pain or present in fulminant cardiogenic shock.13 Various arrhythmias, complete heart block, and tachycardia with metabolic acidosis may be present. Metabolic acidosis and tachycardia may be important indicators of the extent of myocardial involvement.1,11,14,15 Fulminant myocarditis is associated with acute onset of cardiovascular compromise.16 In some cases, myocarditis may be totally asymptomatic and present as sudden death.

Various diagnostic studies are available to assist with the identification of myocarditis. Chest radiographs frequently show cardiomegaly and pulmonary congestion. However, the initial chest film findings in acute myocarditis can be normal. ECG may show low voltages and inverted T waves.9-11 Sinus, atrial, and ventricular tachycardia may be seen, and occasionally, varying degrees of heart block, including complete heart block, may occur.1,11,14,15,17-19

Cardiac enzyme levels are frequently high and are indicative of myocardial necrosis. Myocarditis correlates better with cardiac troponin I or T than with CK-MB in patients who have biopsy-proven myocarditis.20,21

Echocardiography should be performed to assess left ventricular function and the degree of mitral regurgitation.12 Left ventricular size may be indicative of the severity of myocarditis.16

MRI with gadolinium contrast can document the location and extent of inflammation.22-24 Other diagnostic tests, such as acute and convalescent antibody tests, and testing for systemic diseases may be helpful.

The role of endomyocardial biopsy has been extensively studied. The Dallas criteria, developed by a panel of cardiac pathologists, are most widely used by investigators for histopathological diagnosis and classification of myocarditis.25,26 However, endomyocardial biopsy lacks sensitivity. Newer techniques of in situ hybridization and PCR amplification of viral DNA improve the sensitivity. 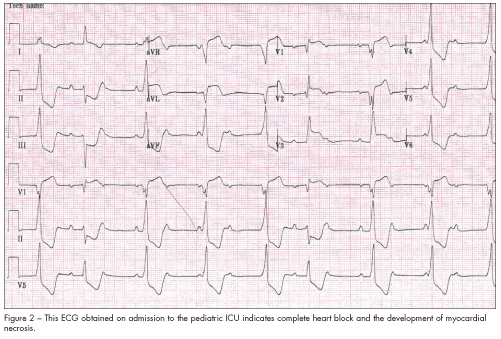 The mainstays of treatment of acute fulminant myocarditis are monitoring, supportive care, and standard regimens for heart failure. The overall treatment of myocarditis can be divided into the following components:

Heart failure. In the acute phase, diuretics are used after load-reducing agents and inotropic drugs. Intravenous agents, such as dopamine, dobutamine, and milrinone, help prevent circulatory collapse. Sedation, intubation, and mechanical ventilation decrease metabolic demand in patients with cardiogenic shock. More severe disease may require extracorporeal membrane oxygenation or a ventricular assist device. These modalities were unavailable at my institution, and the patient’s rapid decline limited the treatment options. For patients who progress to chronic heart failure, diuretics, angiotensin-converting enzyme inhibitors, digoxin, and aldosterone inhibitors are well-accepted therapies. Treatment with ß-blockers has not been shown to improve survival rate in children with chronic heart failure, in contrast to that in adults with chronic heart failure.

Arrhythmias. Although arrhythmias are common in myocarditis and may exacerbate the symptoms of heart failure, treatment with most antiarrhythmic drugs often leads to hemodynamic instability. Thus, antiarrhythmic therapy is used only when the benefits outweigh the risks.

High-grade ventricular arrhythmias should be treated cautiously. Lidocaine is the first-line treatment. During resuscitation attempts, this patient was given lidocaine among other ACLS drugs. The safety profile of amiodarone, which is widely used in adults, is less well demonstrated in children.27

Complete heart block, an often transient conduction abnormality, may be an indication for transvenous pacing. This patient was placed in a telemetric monitoring room with bedside transcutaneous pacing capabilities; however, she did not require pacing.

Myocardial damage. The hallmark of myocarditis is myocardial injury. It is caused by both direct viral damage and the immune response to infection. Immunosuppressive therapy has a limited role in myocarditis, as shown in the Myocarditis Treatment Trial.28

Use of corticosteroid therapy in children with myocarditis and its effect on left ventricular function have been incompletely studied. Most studies have been small with multiple limitations.

Intravenous g globulin has been tried, considering its efficacy in other immune-mediated diseases, and experimental studies in animals also support its efficacy.29,30 High doses of intravenous immunoglobulin (IVIG) have demonstrated greater ventricular function in smaller studies.31 Hence, use of IVIG (2 g/kg over 24 hours) is recommended for children with endomyocardial biopsy–proven myocarditis. The use of corticosteroids and immunosuppressive agents is recommended for patients with myocarditis associated with systemic autoimmune disease.

The prognosis for patients with acute myocarditis varies and depends on clinical presentation, ejection fraction, and pulmonary artery pressure.32,33 Limited information is available on the natural course of myocarditis in children. This is because of the small number of patients affected, poor data collection, lack of biopsy confirmation of myocarditis, and inclusion of other causes of myocardial dysfunction. Complete recovery is more likely to occur in adults with fulminant rather than acute myocarditis. However, similar data are not available in children.

26. Cooper LT, Baughman KL, Feldman AM, et al. The role of endomyocardial biopsy in the management of cardiovascular disease: a scientific statement from the American Heart Association, the American College of Cardiology, and the European Society of Cardiology. Circulation. 2007;116:
2216-2233.

30. George J, Barshack I, Malka E, et al. The effect of intravenous immunoglobulins on the progression of experimental autoimmune myocarditis in the rat. Exp Mol Pathol. 2001;71:55-62.