An 18-year-old girl presented for evaluation of several pink, crusted papules with surrounding hyperpigmentation and a larger pink, crusted nodule with purulent drainage on her inferior right knee (Figure 1). She had multiple thin, linear scars in the same area. Six months earlier, she had injured her knee when the boat she was in collided with a wooden dock. After the accident, she had local abrasions with a few splinters, which she removed. The lesions were currently asymptomatic but showed no signs of healing. She denied fevers, chills, and arthralgias. 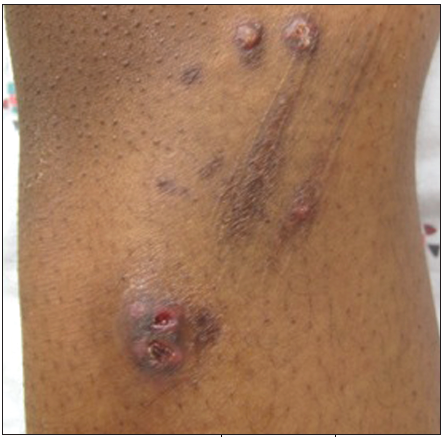 Figure 1 – These nonhealing, crusted lesions on the inferior right knee developed near abrasions acquired 6 months earlier after a boating accident.

The patient was treated with a 3-month course of minocycline(, 100 mg twice daily. At follow-up, the lesions had completely resolved (Figure 2). 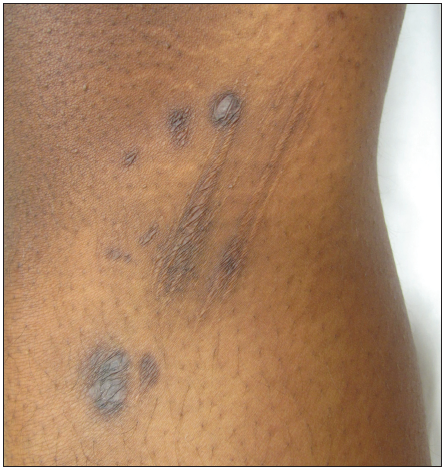 Clinical presentation
M marinum infection often presents within several weeks of inoculation, yet incubation periods as long as 9 months have been reported. Usually, a solitary, erythematous, sometimes painful papule or nodule develops at the inoculation site and eventually evolves into a crusted ulcer.

Areas subject to trauma, such as the upper and lower extremities, are most commonly affected. Additional lesions may develop along lymphatic drainage pathways adjacent to the area of involvement (in a sporotrichoid pattern).1,3

M marinum can also cause deep infections, including tenosynovitis, arthritis, bursitis, and osteomyelitis, which are not accompanied by the characteristic skin changes.4 Disseminated infection with lung, blood, and bone marrow involvement is rare.5

Diagnosis
A thorough history with an emphasis on possible routes of exposure is key to the diagnosis of M marinum infection. It is important to ask patients about any injuries involving contact with aquatic sources. Patients who fish for a living, work in seafood markets, or clean pools or aquariums have associated occupational risk.6 Sporothrix schenckii infection, nocardiosis, leishmaniasis, and tularemia may present in a manner similar to that of M marinum infection.

Confirmation of the diagnosis can be difficult. The organism is rarely visualized on routine tissue staining and does not grow at standard culture temperatures.1,3 Be sure to ask for histopathological and microbiological analysis of the biopsy specimen, and make the pathologist aware that mycobacterial infection is in the differential diagnosis. Granulomas and nonspecific inflammation are characteristic of M marinum infection. If available, polymerase chain reaction testing can help in culture-negative cases.1

Treatment
The infection may resolve spontaneously within 1 to 2 years without treatment. However, because of the risk of progression to deeper bony structures, antibiotic therapy is usually indicated. Tetracyclines, trimethoprim(/sulfamethoxazole, macrolides, quinolones, rifampin, and ethambutol( are effective options—although there have been no controlled studies on optimal treatment because the infection is relatively uncommon.1,3,6 Note that the organism is naturally drug-resistant and that several antibiotics may need to be tried to achieve clinical clearance.3 Use of nonpharmacological therapies, such as surgical debridement or cryotherapy, has also been reported, but there have been no controlled studies of their comparative safety and efficacy.3

The duration of antibiotic treatment may vary. Most sources recommend at least 3 months of therapy, with possible continuation of treatment for 4 to 6 weeks after clinical resolution. Successful treatment involves close follow-up for the possibility of antibiotic resistance.