Dr Shahady is clinical professor of family medicine at the University of Miami in Florida, an associate faculty member in the Tallahassee Memorial Hospital Family Practice Residency Program, and medical director of the Diabetes Master Clinician Program of the Florida Academy of Family Physicians Foundation in Jacksonville.

Dr Paull is professor of anatomy at Florida State University College of Medicine in Tallahassee.

A 12-year-old girl complains of left knee pain and swelling that resulted from a collision with another player while she was playing kickball the day before. Her left foot was planted as she tried to catch a ball, and she was hit on the outside of the left knee. She fell to the ground and was unable to walk on the injured leg; overnight, the knee became more swollen and painful.

Flexion of the left knee is limited to 60 degrees, and there is an extension lag of 10 degrees. Results of a Lachman test are negative, but application of valgus stress to the knee produces some medial laxity and increased pain. Examination of the right leg reveals normal extension (to 0 degrees), flexion to 145 degrees, and no laxity or discomfort during a Lachman test or a valgus stress test.

What is your presumptive diagnosis at this point?

Swelling and the inability to bear weight indicate a significant injury, such as a fracture or a ligament tear. The mechanism of injury--being hit on the lateral side--is consistent with a medial collateral ligament tear; pain and laxity on examination make this diagnosis even more likely.

The physis--the cartilaginous layer between the epiphysis and the metaphysis--represents the weakest biomechanical link in the growth plate and is the most susceptible to shear forces. Physeal injuries can completely disrupt the physeal blood supply, leading to premature closure of the physis and avascular necrosis of the epiphysis.

Physeal injuries can result from overuse as well as from acute trauma. For example, the excessive training that young gymnasts sometimes engage in can cause physeal overuse injuries. Repetitive, rapid, high-loading exercises--which may generate stress on the wrist equal to 3 times an athlete's body weight--can produce physeal changes and growth arrest in the distal radius.

What study would you order now?

Radiographic examination (D) is required in every child in whom a growth plate injury is suspected. The Ottawa knee rule, which is used to help determine when knee radiographs are required in children (Box), also indicates a need for radiographs in this patient. Two of the four conditions listed in the rule are present (she is unable to flex her knee beyond 90 degrees, and she cannot bear weight). 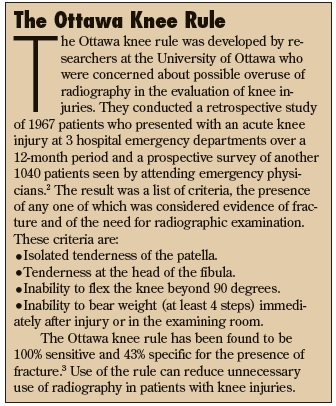 If a routine (nonstress) film reveals no suspicious findings, obtain a stress film to determine whether the physis opens with valgus stress. Although most physeal fractures are visible on both stress and nonstress films, those that involve only transphyseal separation produce no fracture lines and thus cannot be seen on nonstress radiographs. In this patient, a stress film would proba-bly demonstrate physeal opening, given the results of her valgus stress test.

Always obtain radiographs of the contralateral extremity; these can minimize confusion between normal physeal lines and fractures.

MRI, CT, and bone scanning have limited value in the assessment of growth plate injuries. The struggle involved in performing these studies in children without the use of sedation, their cost, the possibility of false-positive interpretations of results, and major discrepancies among the interpretations of different radiologists limit the usefulness of these studies in patients whose skeletal system is immature.

The patient's radiographs reveal a transphyseal separation with extension through the metaphysis.

What type of fracture is this?

A. Salter-Harris type I.

The Salter-Harris classification system serves as a guide for both diagnosis and treatment of growth plate fractures. Salter-Harris type I injuries involve a purely transphyseal separation; no osseous fracture lines are visible. Type II fractures (B), the most common type of physeal injury, consist of transphyseal separation and extension through the metaphysis. This is the category of this patient's injury. Almost all Salter-Harris type I and type II fractures can be treated with closed reduction and immobilization.

Most physeal injuries in children heal without growth disturbance. However, significant growth disturbances occur in about 10% of such injuries. Thus, follow-up examinations are required to search for any signs of altered physeal growth. Almost all cases of growth arrest occur within 1 year of injury.

This patient is treated with immobilization for 4 weeks and does fairly well. There is no evidence of growth arrest after 1 year. Over the next 3 years, however, she begins to experience periodic swelling of her knee and a feeling that her knee is giving way. Eventually, she seeks medical attention for these symptoms. Examination reveals atrophy of the vastus medialis muscle of her left knee (Figure 1), positive results of a patellar push test (Figure 2), and positive results of a Lachman test (presence of a soft end point) (Figure 3). Results of the remainder of the knee examination are normal. 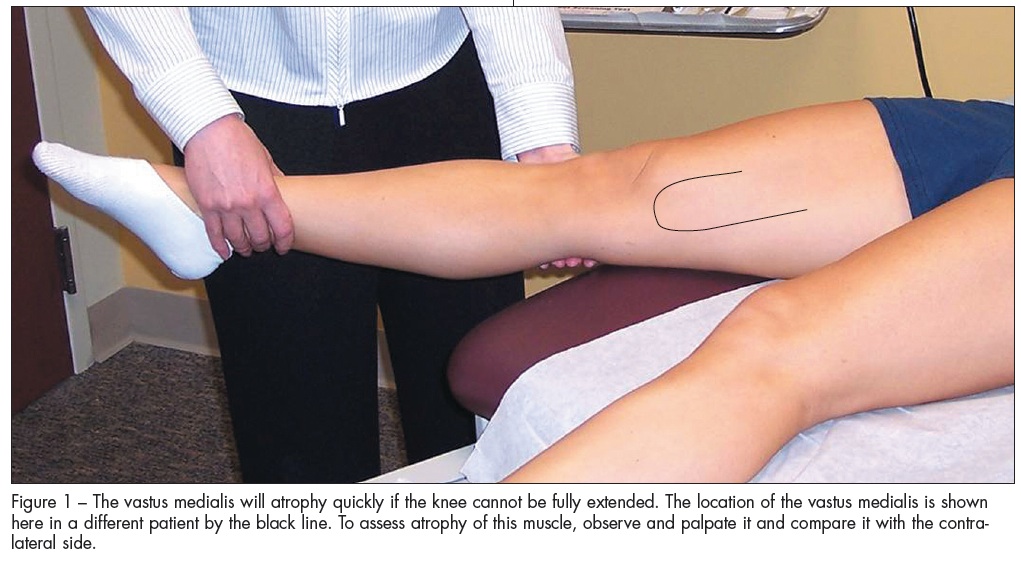 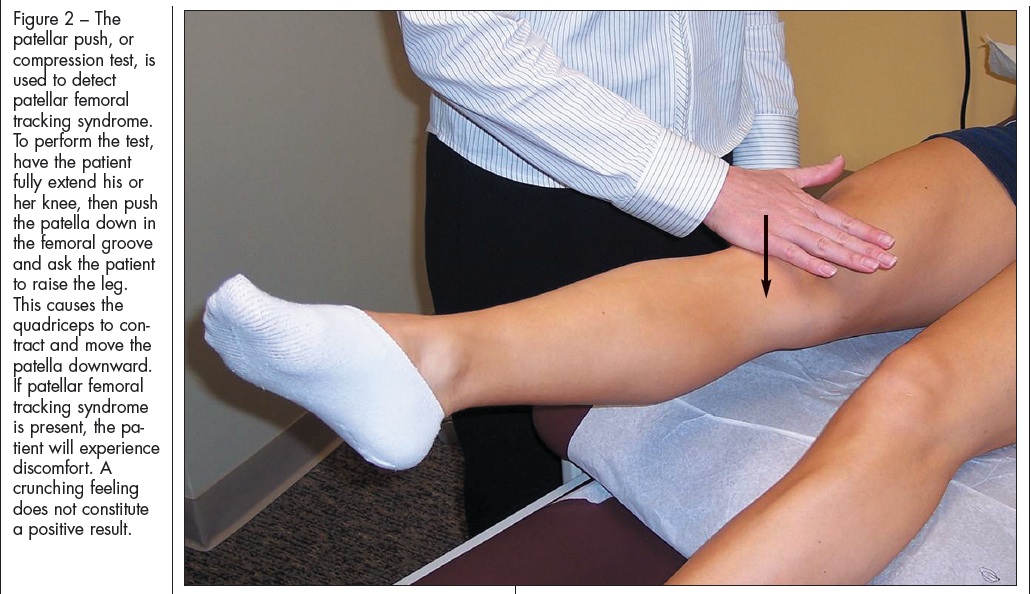 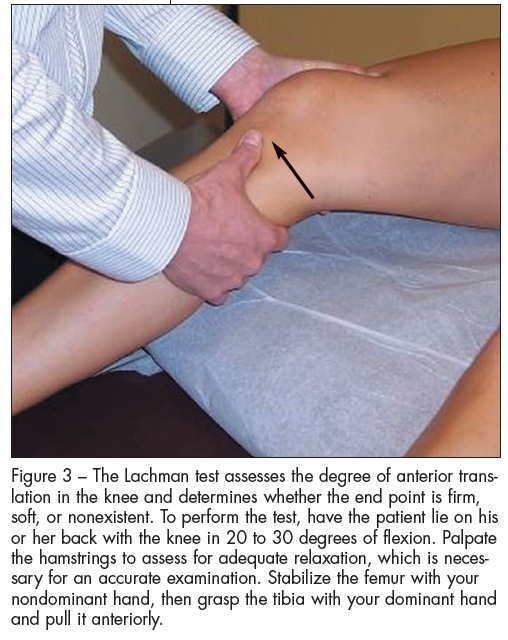 Which of these conditions are now in your differential?

A positive result on a Lachman test and periodic swelling are consistent with an anterior cruciate ligament tear (D). Vastus medialis atrophy, a positive result on a patellar push test, and a history of buckling can occur with patellar femoral tracking syndrome (A). Medial meniscus injury is a possibility even with examination results that are negative for this condition (B). Meniscal damage often develops in knees in which there is an injury of the anterior cruciate ligament, because of the excessive external rotation that occurs in this setting.

Because the patient's skeleton is now more mature (and because she is older and more likely to cooperate during the examination), MRI is a more reliable imaging modality than it was at the time of her earlier knee injury.

Outcome of this case

Coexisting injuries. The presence of a growth plate fracture does not rule out concomitant ligamentous injury. To detect such injuries, follow-up examination is important. Ligamentous injury will usually become evident within 3 to 4 months of the initial trauma if the clinician is alert to the possibility. The significant swelling that this patient initially experienced is more common with an accompanying anterior cruciate ligament injury than with a growth plate injury alone. Thus, in her case, evaluation for a possible anterior cruciate strain or tear would have been especially important. However, this may not have been done because, in the past, this type of injury was thought to be less likely than a simple growth plate fracture and was commonly missed.

Dorizas and Stanitski1 monitored 30 children with growth plate injuries and found that 14 had evidence of ligament instability. Eleven had anterior cruciate ligament laxity, and 5 had medial collateral ligament laxity. Thus, it is important to maintain a high index of suspicion for coexisting ligamentous injury in all children with physeal injuries of the knee. Periodic follow-up with reexamination of the knee is the most efficient way to discover a ligamentous injury accompanying a growth plate injury.