Multiple Infectious Complications in a Patient With Influenza Infection

A 55-year-old woman was admitted to her local hospital and immediately intubated after 5 days of worsening fever, malaise, cough, and dyspnea. Initial testing confirmed infection with influenza B, and the patient was started on oseltamivir. Blood and sputum cultures obtained at the time of admission were positive for methicillin-sensitive Staphylococcus aureus. She was treated with a variety of antibiotic agents (including ampicillin-sulbactam, fluconazole, gentamicin, nafcillin, piperacillin-tazobactam, rifampin, and trimethoprim-sulfamethoxazole) without improvement and was subsequently transferred to a tertiary care center.

Shortly after transfer, a computed tomography scan revealed extensive bilateral pneumonia with areas of nodularity and frank necrosis in the right lung, as well as ground glass infiltrates on the left (Figures 1 and 2). She then underwent video-assisted thoracoscopic decortication for this empyema. At the same time, her antibiotics were adjusted to linezolid and piperacillin-tazobactam. 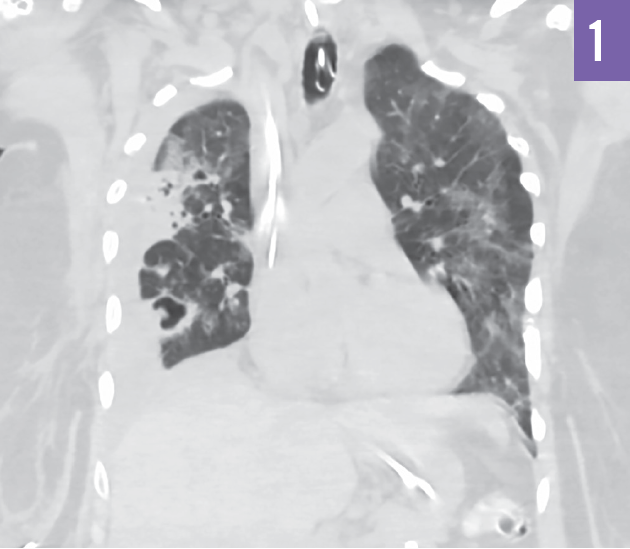 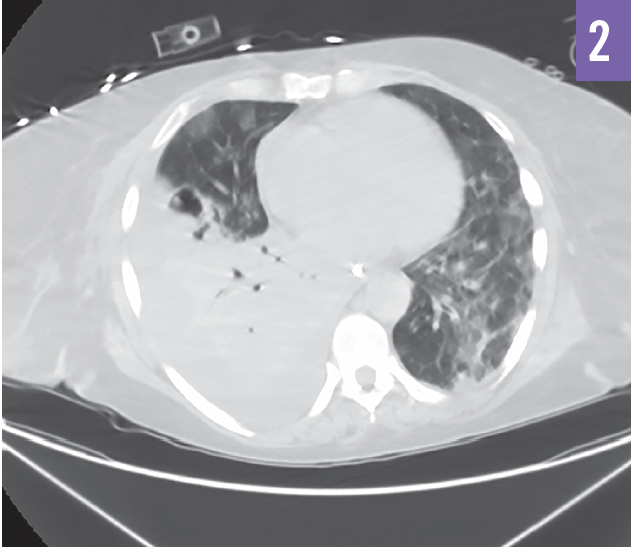 A few days later, results of a surveillance sputum culture taken shortly before surgery came back positive for Aspergillus fumigatus. Anidulafungin and voriconazole were added to her regimen, and the patient’s clinical status stabilized over the next 2 weeks. She remained ventilator-dependent and was ultimately discharged to a long-term acute care facility with a tracheostomy. There, she continued her rehabilitation and completed a 4-week course of postoperative antibiotics, as well as a prolonged course of antifungal therapy.

Discussion. Patients with influenza classically present with fever, malaise, myalgia, and respiratory symptoms.1 There is an increased risk of infection in children younger than 1 year; in adults older than 65 years; and in persons with comorbidities such as pregnancy, immunodeficiency, diabetes, dementia, stroke, and diseases of the heart, lungs, or kidneys.1 Generally, influenza resolves without sequelae. In these high-risk individuals, however, hospitalization rates and mortality rates are increased.1,2

One feared complication of bacterial pneumonia, particularly cases caused by S aureus, is the development of necrotizing and cavitary disease, including abscess and empyema.4-6 Lung abscesses caused by S aureus have reported mortality rates of approximately 50% compared with an overall death rate of approximately 20% across all lung abscesses.7 In comparison, the estimated in-hospital mortality rate for community-acquired pneumonia is approximately 4%, a difference highlighting the risk of cavitary or necrotizing pulmonary infections.8

A fumigatus is a ubiquitous mold that can be found in soil, dust, water, spices, compost, organic debris, stored hay and grains, and rotting plants.9,10 The conidia of aspergilli are small (2.0-3.5 µm), which allows them to be easily inhaled into the depths of the lungs.9,10 If the host immune mechanisms are inadequate to overcome the exposure, the fungus can become deposited in the pulmonary tissues. Preexisting lung cavities, such as those created by bacterial abscess or granulomatous disease, are common sites of colonization by aspergilli following inhalation.10 If an immunocompetent patient inhales Aspergillus spores, colonization of the airways and associated minor illness may occur. However, in patients with underlying lung disease and/or immunocompromisation, there is risk for pulmonary invasion and destruction.9

Our patient had an influenza infection, which is a common problem. She developed secondary bacterial pneumonia, which is a common complication of influenza. This staphylococcal pneumonia became cavitary, and her case was further complicated by the development of pulmonary aspergillosis. The progressive deterioration of the patient in this case highlights the importance of recognizing the potential complications of commonly encountered conditions such as influenza.