A 42-year-old male presented to the emergency department with multiple complaints that had developed over the past month. He first noticed a painful mass on his left shoulder, and then more tender lumps began appearing on his abdomen, back, and neck. He had also been experiencing sharp abdominal, back, neck, hip, and extremity pains that subsequently forced him to quit his weekly recreational basketball games. He reported multiple positives in his review of systems, including night sweats, intermittent diarrhea and constipation, nausea and vomiting, and a weight loss of 20 lbs. 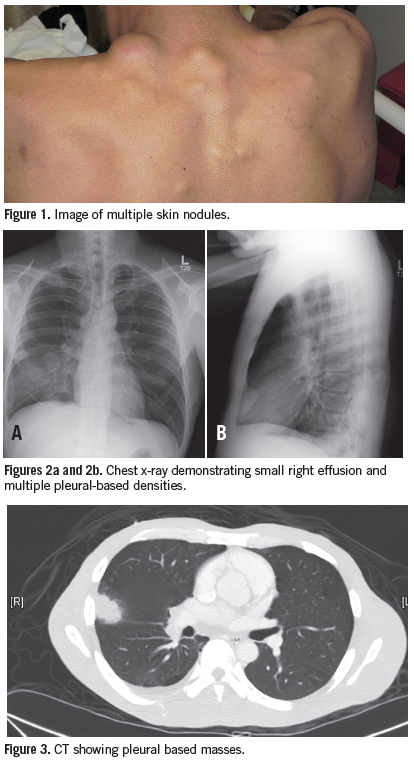 The patient had been in an outpatient clinic earlier that month with similar complaints, including back pain, weight loss, and skin lesions. At the time, basic labs and lumbar spine x-rays were performed, all of which were unremarkable. He was referred to general surgery for biopsy of the skin lesions, but he came to the emergency department prior to this scheduled appointment.

The patient had no significant past medical history. He takes NSAIDs for his back pain with minimal relief. He is a half-pack per day smoker but denied any drug or significant alcohol use.

On examination, the patient was in no acute distress, and his vital signs were normal. He had no scleral icterus. Mucous membranes were moist. Lungs were clear, and cardiovascular exam was normal. No neurologic deficits were identified. He had diffuse abdominal tenderness without guarding or rebound. The patient’s skin exam was notable for nodules ranging from pea to golf ball in size on his posterior neck, supraclavicular region, and bilateral flanks. These nodules were firm, mobile, and tender. There was no erythema or fluctuance (Figure 1).

The patient received morphine to alleviate pain while tests were conducted. Complete blood count was only remarkable for slight leukopenia. Liver tests revealed elevated bilirubin, a slight elevation in his alkaline phosphatase, and a mild transaminitis. A basic metabolic panel was normal.

A chest x-ray (CXR) demonstrated multiple pleural-based densities in the right lower chest, the retrocardiac region of the left lung base, and a small right pleural effusion (Figures 2a and 2b). A chest, abdomen, and pelvis scan was performed to further evaluate his abdominal complaints as well as the abnormal CXR findings. The scan revealed multiple masses and adenopathy throughout the chest, abdomen, and pelvis, pancreatic obstruction, severe compression of multiple vascular structures, and multiple pleural-based masses as identified on the CXR (Figure 3).

The patient was informed of the concern for metastatic disease. He was admitted for pain control, further evaluation, and management. An ultrasound-guided biopsy of the nodule on his right flank was performed (Figure 4). The oncology service evaluated the patient and diagnosed a poorly differentiated non-small cell cancer with neuroendocrine features and unknown primary source. An endoscopic retrograde cholangiopancreatography  with stent placement relieved his biliary obstruction. A single treatment of radiation therapy was directed at a painful metastatic lesion on his right proximal humerus. 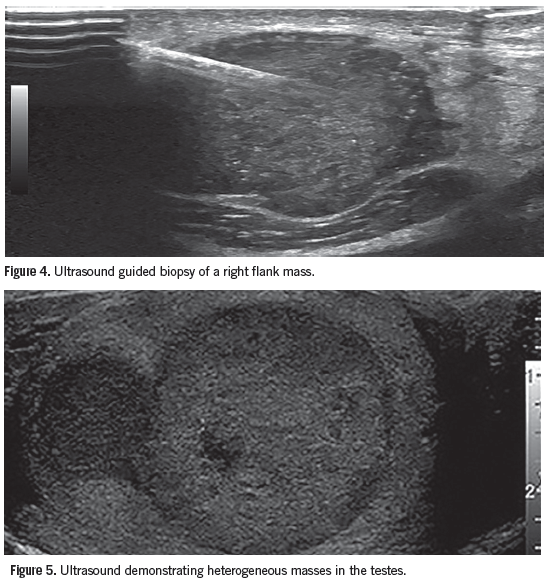 Skin nodules can originate locally in the skin or as a sign of a systemic disease process. The differential depends on features of the masses, time course of development, as well as patient symptoms. Benign skin tumors can typically be identified based on their distinctive appearance. Lipomas present as soft masses that gradually increase in size. Abscesses produce fluctuance, tenderness, and erythema. Systemic infections can produce skin lesions, and careful evaluation of the lesions as well as travel and exposure history can help to confirm these diagnoses. Skin lesions that do not present with characteristic features should prompt consideration for a biopsy for further evaluation.

Skin metastasis may develop in nearly 10% of patients with cancer; it is a rare presentation of internal cancers.1 Cancers most likely to develop skin nodules are breast, lung, skin, lymph node, blood and bone marrow, kidney, and GI malignancies.2 Testicular cancer has been found to be the primary cancer for only 0.5% of metastatic skin nodules identified at only 1 cancer center in the United States.2 Most cutaneous metastases present as solitary nodules although melanoma and carcinoma of unknown origin were found to present with multiple nodules.1 Skin lesions offer an accessible biopsy site for diagnostic and therapeutic purposes.

The patient was discharged 8 days later with a plan to initiate chemotherapy upon review of his case by the oncology tumor board. At follow-up, an elevated serum human chorionic gonadotropin level was discovered. Although the patient had no palpable testicular abnormalities, an ultrasound showed multiple masses (Figure 5). His chemotherapy was adjusted to target metastatic germ cell carcinoma of the testes.

The patient initially had very good response to chemo and radiation therapy, but he relapsed 9 months later. He is now undergoing salvage therapy to slow the progression of his disease.