An infant girl born at 39 weeks’ gestation had skin and eye defects that were evident at birth. The infant was born to a 45-year-old woman with a history of 3 prior pregnancies with a different father; 2 of those pregnancies ended in miscarriage and the third in sudden infant death syndrome. The prenatal course for this infant was notable for absent corpus callosum, intrauterine growth restriction, and polyhydramnios identified by ultrasonography. The mother declined further prenatal genetic testing. The infant was born via Cesarean delivery for double-footling breech presentation.

The initial physical examination revealed that the infant was small for gestational age. Dermatologic examination was remarkable for irregular shiny red linear skin defects primarily localized to the face and neck, with a few defects near the axillae and on lower extremities bilaterally (Figure 1). Eye examination results showed bilateral blepharophimosis, microphthalmia, sclerocornea, eyelid coloboma, and absent red reflex (Figure 2). Cardiovascular examination was notable for a displaced point of maximal impulse to the right of midline and a single second heart sound; no murmurs were heard. The remaining physical examination results were unremarkable, but the infant failed a newborn hearing screen bilaterally.

Because of the complicated presentation of absent corpus callosum, skin defects, and microphthalmia, imaging was performed to evaluate for other midline defects. Brain magnetic resonance imaging confirmed agenesis of the corpus callosum and bilateral microphthalmia. Echocardiogram revealed a patent ductus arteriosus, patent foramen ovale, and mesocardia. Renal ultrasonography findings were consistent with pelvic caliectasis of the left kidney. 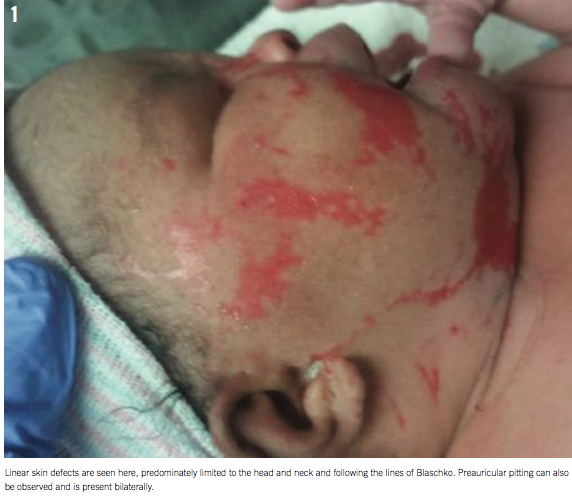 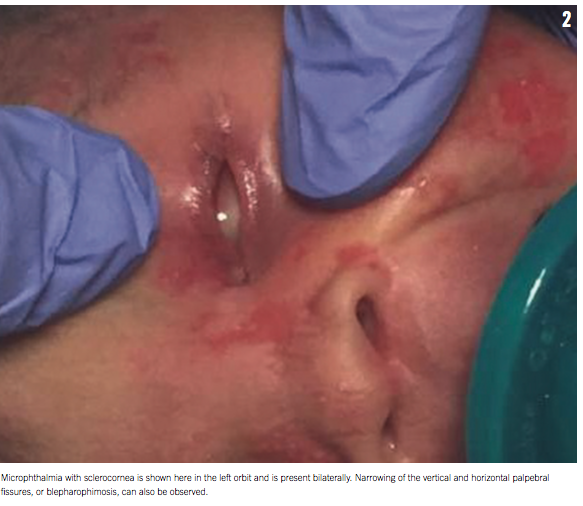 The findings were consistent with a diagnosis of microphthalmia with linear skin defects (MLS) syndrome, which is a constellation of congenital anomalies predominantly characterized by the 2 anomalies for which it is named: microphthalmia and skin defects that follow the lines of Blaschko. Minor criteria for clinical diagnosis include other ocular anomalies, central nervous system (CNS) involvement, congenital heart defects, short stature, developmental delays, hearing loss, and genitourinary malformations.1-3 A clinical diagnosis can be made when the 2 major criteria are present. Major and minor criteria are described further in Table 1.

Historically, MLS syndrome has been known as Gazali-Temple syndrome, which was first described by al-Gazali in 1990,4 and MIDAS syndrome (microphthalmia, dermal aplasia, and sclerocornea), coined by Happle and colleagues in 1993.5 Differential diagnoses, including similar and distinguishing features, are detailed in Table 2.6,7 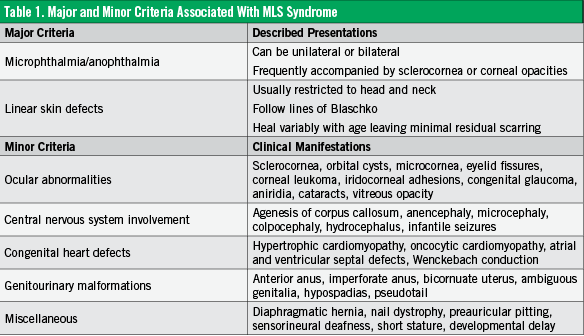 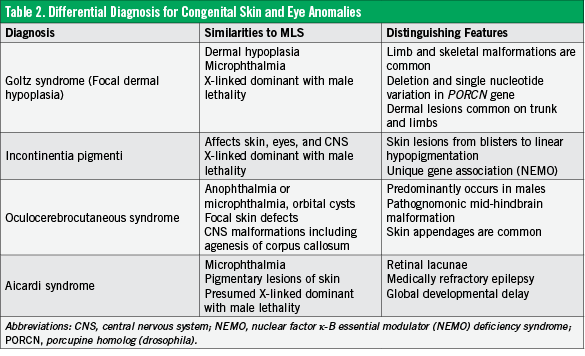 MLS syndrome has been linked to mutations in the HCCS gene, located on the Xp22.2 locus.8 The HCCS gene product is a mitochondrial enzyme, holocytochrome c-type synthase, which has a role both in oxidative phosphorylation and in caspase-dependent apoptosis.9,10

To date, fewer than 100 cases of MLS have been described. Classically, MLS is inherited in an X-linked dominant fashion with male lethality. Many cases are the result of de novo mutations. Males have rarely been described with MLS syndrome; all of these cases have sex chromosome anomalies.11,12

MLS is highly variable in penetration.13,14 One hypothesis is that the phenotypic variability could be attributed to the pattern of X-chromosome inactivation.13,15 While it has also been suggested that disease severity might correlate with the extent of Xp deletion, current evidence does not support this hypothesis.14

MLS can be clinically diagnosed with the presence of the 2 major criteria. When validation is desired, or when MLS is suspected based on family history or presence of minor criteria, the diagnosis can be confirmed by genetic tests that show a deletion or mutation at Xp22. Additional informative tests include prenatal karyotype, X-chromosome inactivation studies, array comparative genomic hybridization, fluorescent in situ hybridization, and sequencing of the HCCS coding region.16,17 Given the phenotypic variability and possibility of reduced penetrance, a clinically unaffected mother should be offered prenatal counseling for future pregnancies.

Due to the highly variable phenotype, infants with MLS syndrome are managed according to the specific manifestations of their disease. Initial evaluation by a pediatric dermatologist, ophthalmologist, and geneticist is recommended. Involvement of a neurologist, audiologist, cardiologist, and nephrologist may also be indicated. Prostheses may be considered for severe microphthalmia after 6 months of age, once orbital growth can be better assessed. Typically, the skin lesions heal over time with minimal scarring. Early interventional services to promote optimal development are warranted for all patients.

Presley Garrison is a medical student at Brody School of Medicine at East Carolina University in Greenville, North Carolina.

13. Wimplinger I, Rauch A, Orth U, Schwarzer U, Trautmann U, Kutsche K. Mother and daughter with a terminal Xp deletion: implication of chromosomal mosaicism and X-inactivation in the high clinical variability of the microphthalmia with linear skin defects (MLS) syndrome. Eur J Med Genet. 2007;50(6):421-431.