A Middle-Aged Man with Syncope

A 53-year-old man is admitted via the emergency room for evaluation of episodes of near syncope and syncope. He has had at least 6 episodes over the last 2 weeks. He gets the sensation of “blacking out” and then recovers without sequelae. There are no neurological symptoms—eg, vertigo, focal weakness, or seizure—prior to or after the events. He denies chest discomfort or shortness of breath, but does relate the sensation of palpitations prior to most of these events.

History is negative for prior heart disease, diabetes, or hypertension. He is a prior smoker as well and his primary physician believes he has mild COPD, which is treated with a bronchodilator. Over the last month, he had symptoms of a bronchitis flare and was prescribed azithromycin with a refill.

He does report prior opioid addiction, but has been repeatedly tested and is negative for hepatitis C or HIV. He has been under the care of an addiction center for several years and routinely receives methadone maintenance with current dosage of 140 mg/d, which has been stable at least 1 year.

Physical exam reveals a thin man in no apparent distress. His pulse rate is 76 beats per minute and regular. There are no distended neck veins, significant cardiac murmurs, or gallops. Lungs reveal an occasional expiratory wheeze bilaterally. The remainder of the exam was normal.

Which of the following is a correct statement about the presented case?

A. His sex, age, and symptom complex are most consistent with a genetic defect in a cardiac ion channel.

B. Optimal therapy in his case is the emergency placement of an implanted cardioverter defibrillator.

D. The incidence of serious morbidity is quite low—allowing for interval clinical and EKG monitoring as long as symptoms do not worsen.

This case can be approached in either of 2 ways, both of which lead to the same conclusion, diagnosis, and management. Option 1: The patient’s presentation is syncope and palpitations—and suggestive of arrhythmia, accompanied by a clear abnormality on EKG of a very significantly prolonged QT interval. Option 2: Here is a patient on high doses of a methadone, which currently is the leading pharmacologic cause of QT prolongation.1 Furthermore, the patient intercurrently has a macrolide added—another drug that is also well-known to interact and further worsen the QT interval. As a result, these pharmacologic adventures have then resulted in his symptoms.

Longer QT interval physiologically represents prolongation and deformities of action potentials in cells in the ventricular myocardium. These deformities can generate spontaneous upstrokes, which can lead to ventricular ectopic beats. In full development, these ectopic beats can and will lead to torsade de pointes and malignant, life-threatening ventricular tachycardia.2 There are 2 major variants of this electrophysiological syndrome: acquired, drug-induced and hereditary.2-4

• Hereditary. These forms have become more clearly elucidated, and involve several genetic abnormalities in the sodium or potassium ion channels in the myocardium.3,4 They present at young age with palpitations, presyncope, syncope, and cardiac arrest. They can be diagnosed clinically, but precise genetic testing is now available to confirm the diagnosis and provide clinical and risk stratification to the patient which aids in management.3

• Drug-induced. The drug-induced, acquired form—the diagnosis in this case—is often initially delineated in drug and marketing testing of pharmacologic agents.1 Whether to approve and use such agents is then adjudicated on drug need, available alternatives, and related parameters. The Table shows drugs that are causes of prolongation of QT interval.2

In our case, the patient uses methadone, which is currently the most frequent drug associated QT interval agent in the US. Noteworthy: Ventricular arrhythmia and cardiac arrest is the most frequent methadone adverse event.1 The etiology of these events can be traced back to the 1990s when opioid drug addiction was rampant due to frequent prescription writing.

The concomitant occurrence of opioid addiction with HIV infection has increased since antiretrovirals have their own QT prolongation effects.1,2 Physicians dealing with patients using these medicines must be aware of this and carefully coordinate the pharmacology of their patients, monitor QT changes at frequent intervals, and remain attentive to symptoms suggestive of impending trouble—such as palpitations and syncope.

In this case, the patient has 2 very reversible situations: concomitant use of a macrolide (which can be avoided) and high dosage of methadone (which can be lowered—certainly to less than 110 mg/d to 120 mg/d). Thus, Answer C is the correct one here. 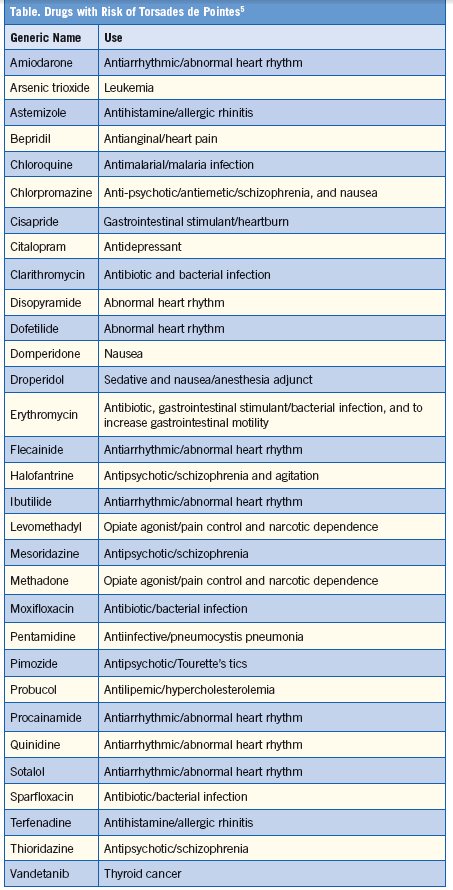 Answers A and B relate to genetic causation of the long QT syndrome (LQTS), a genetically transmitted family of disorders of ventricular repolarization that predisposes carriers to life-threatening cardiac arrythmias. The pathophysiology of LQTS has been elegantly elucidated as arising from a variety of mutations (LQT 1-6) that effect abnormalities in either the potassium channel (LQT 1-2) or sodium channel (LQT3) genes. These mutations result in abnormal QT interval prolongation, risk of torsade de pointes, degeneration in cardiac arrest, and sudden death.3,4

Unlike our case, LQTS typically presents in young persons and are typically exercise-reduced (LQT1) or induced from acute arousal type emotions, such as alarm clocks (LQT2).

Therefore, the demographics in our case are not at all typical of the genetic forms. He has significant exposures to the most common drug causing QT interval prolongation (methadone) as well as compounding pharmacology with another frequent culprit (macrolides)—all of which make Answers A and B unlikely.

The patient had his methadone dosage lowered to 100 mg/d and was notified that he is allergic to such agents as macrolides so long as he is on methadone. His QT interval shortened to 400 ms. He has had no symptoms of palpitation or near syncope since.

Drug-induced prolongation of the QT interval is a common occurrence, yet is under recognized. Such QT prolongation can cause symptoms of palpitation, syncope and near syncope, and on occasion, sudden death. Methadone is likely the most common drug causing prolonged QT interval currently in the US and ventricular arrhythmias are the most frequent adverse effect of methadone use. This is clearly an unanticipated, serious adverse effect related to the hysteria of allegedly unrecognized and undertreated pain in patients—an initiative that resulted in the “Pain as the Fifth Vital Sign” in 1995. All physicians need to be aware of drug-induced QT interval prolongation with now commonly used drugs, such as methadone and antiretrovirals.