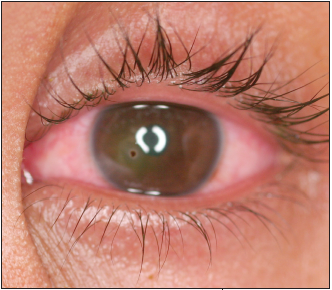 Two days after "heading" a soccer ball, a 17-year-old boy presented to the emergency department with progressive pain and a foreign-body sensation in his left eye. Visual acuity was 20/20 in the right eye and 20/25 in the left eye. The pupils were equally round and reactive; full extraocular movements of both eyes were noted. The left eye had conjunctival injection and a 1-mm foreign body on the medial cornea with a surrounding halo of discoloration--typical of a metallic corneal foreign body. A Seidel test (which demonstrates streaming of fluorescein( dye from the aqueous humor when illuminated with UV light) revealed no evidence of corneal perforation; there were noareas of fluorescein dye uptake.

The patient was referred to an ophthalmologist for removal of the metallic corneal foreign body and rust ring. The patient had no evidence of an intraocular foreign body. The piece of metal might have been picked up by the surface of the soccer ball and then deposited on the patient's cornea when he headed the ball. (Generally, grinding, drilling, or striking metal on metal is a higher risk activity.1) An antipolymicrobial ophthalmic ointment was prescribed for the resultant corneal epithelial defect.

Metallic foreign bodies must be removed promptly to prevent permanent corneal staining, which can develop within a few hours of embedding.2,3 Ophthalmological consultation is generally recommended for removal of the foreign body and corneal rust ring. This is often performed under magnification with a slitlamp (or biomicroscope).4 The offending object can be removed with a tuberculin needle or foreign-body spud, and any rust staining can be extracted with an automated rust ring drill, brush, or burr.4,5 Complications of the foreign body include corneal ulcer formation, perforation, and scarring.1,2,5

At follow-up, this patient had a small corneal stromal scar but no corneal staining. Visual acuity in his left eye had improved to 20/20-1. *