Melanonychia Striata Versus Onychomycosis: Nailing Down the Differences

Can fungal infections present with a brown band along the longitudinal axis of the nail similar to melanonychia striata but perhaps affect other digits?
—— Bea Maidana

The distinctive features of melanonychia striata usually allow a straightforward differentiation from onychomycosis.

MELANONYCHIA STRIATA
Also known as longitudinal melanonychia, melanonychia striata is characterized by a tan, brown, or black longitudinal streak within the nail plate (A).1 The condition is noted more often in persons with deeply pigmented skin and is rare in whites. It is caused by an increased activity of melanocytes in the nail matrix with subsequent increased melanin deposition in the nail plate. In most cases, the occurrence is sporadic and there is no underlying pathology. Melanonychia striata is more common in the thumb, which is the most frequently used digit.2 The index, middle, fourth, and fifth fingers grasp objects with decreased frequency and demonstrate a correspondingly lower incidence of melanonychia striata. Involvement of the toes or multiple digits is unusual.3 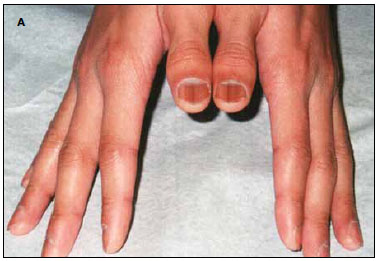 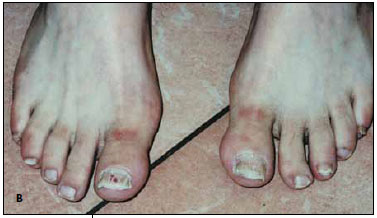