A boy had been born to a 28-year-old mother who had chronic hepatitis B virus (HBV) infection, gestational diabetes, and late prenatal care beginning at 19 weeks of gestation. At 29 weeks of gestation, an enlarged cisterna magna of 1.1 cm had been discovered on fetal ultrasonography. Repeated measurement at 36 weeks had shown a dilation of 1.2 cm. The child was large for gestational age, and thus the mother had undergone elective cesarean delivery.

After delivery, the neonate’s Apgar score was 8 at 1 minute and 9 at 5 minutes of life. His birth weight was 4850 g, birth length was 53 cm, and birth frontal occipital circumference was 35.5 cm. The patient was admitted to the nursery, was monitored closely for hypoglycemia, and was administered the HBV vaccine and immunoglobulin. Postnatal ultrasonography (Figure) confirmed a diagnosis of mega cisterna magna (MCM). 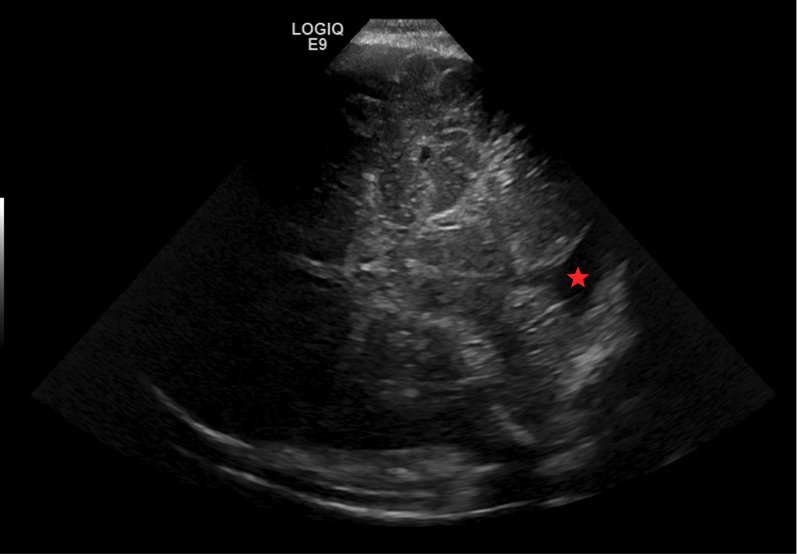 In the nursery, he developed tachypnea and temperature fluctuations that self-resolved, and he did not have any hypoglycemic events. Additional physical examination findings included caput succedaneum and bilateral hydroceles. He was discharged home after a 4-day hospital stay. At 2-week and 2-month follow-up visits, the boy was developing normally and was meeting developmental milestones.

Discussion. A posterior fossa malformation (PFM) occurs in 1 in 5000 live births.1 Cerebellar vermis malformations are a subset of PFMs that are sometimes described on a spectrum known as the Dandy-Walker continuum.1 This continuum includes various anomalies such as Dandy-Walker malformation, Dandy-Walker variant, inferior vermis hypoplasia, and mega cisterna magna.1

Cisterna magna, also known as posterior cerebellomedullary cistern, is a dilation of the subarachnoid space located in the region posterior to the medulla and caudal to the cerebellum. If this dilation is greater than 10 mm measured from the posterior side of the cerebellar vermis to the inner aspect of the occipital bone, with the concomitant presence of a normal vermis and fourth ventricle, it is then categorized as enlarged or mega cisterna magna.2

Most cases of MCM are found prenatally but may not be discovered until after birth.3 MCM appears to have a male predominance, with 3.75 reported cases among males for every 1 reported case among females.4 MCM can be an isolated condition; however, as many as 62% of cases are associated with other chromosomal, central nervous system (CNS), or extra-CNS anomalies.4 In a meta-analysis that included 144 fetuses with MCM, 12.6% had additional CNS anomalies such as ventriculomegaly (the most common), cerebellar hypoplasia, and arachnoid cysts. Extra-CNS anomalies were found in 16.6% of the fetuses.3 The most common extra-CNS anomalies were renal defects such as horseshoe kidney.2,3,5

Although children born to mothers with diabetes have higher rates of CNS anomalies such as caudal regression syndrome, anencephaly, holoprosencephaly, and spina bifida, no evidence in the literature shows an increased prevalence of MCM in infants born to mothers with pregestational or gestational diabetes.6 In our patient, prenatal care had been initiated at 19 weeks, and it is unknown whether the mother had hyperglycemia in the first 8 weeks of pregnancy, during the crucial period of organogenesis. Nonetheless, this case suggests gestational diabetes as having a potential association with MCM.

Developmental or cognitive delay occurs in as many as 8% of patients with MCM; however, the full impact of this condition on language and behavioral development is still unknown.1 A study of 123 fetuses with isolated MCM or MCM in conjunction with other CNS anomalies (ie, nonisolated MCM) followed the cases of these patients for the first 2 years of life to assess for developmental deficits.7 The study found slight impairments in gross motor skills and adapting abilities in the isolated MCM group compared with the control group. The group of patients with nonisolated MCM scored significantly lower than the control group and the isolated MCM group in gross motor skills, fine motor skills, adapting ability, language, and social behavior categories of the Gesell Developmental Schedules.7 However, in general, children with isolated MCM (such as our patient) have a favorable neurodevelopmental prognosis, with normal development occurring in more than 90% of cases.1,4

Recently, prenatal imaging techniques have improved, leading to more frequent and earlier diagnosis of MCM.1 These developments have made parental counseling increasingly important after diagnosis and crucial in patient follow-up after birth.1 However, due to the paucity of literature on MCM and other PFMs, understanding of the clinical implications and prognosis of these abnormalities remains very limited. This lack of information makes it more difficult for clinicians and families to make decisions about the care of these patients. One set of data indicates that nearly 80% of parents prefer to abort fetuses identified with PFAs in some parts of the world.1 This may be unwarranted, given that cases of isolated MCM have a favorable developmental prognosis.