Dr Hayden is professor of pediatrics at the University of Virginia School of Medicine in Charlottesville and a member of Consultant For Pediatricians’ Editorial Board. Dr Hayden reports that he has no relevant financial relationships to disclose.

The measles, mumps, and rubella (MMR) vaccine is one of the great public health successes of the past 50 years. The United States, for instance, has very high rates of measles vaccination attributable, at least in part, to enforcement of school immunization laws. As a result, indigenous transmission of measles has been virtually eliminated in this country, and many pediatric residents in training never see a child with measles. With the recent rise in measles cases, we find this disease once again on our radar.

In my local health district in central Virginia, 3 cases of measles were reported in May 2011. The last case of measles reported here was in 1990. The first of the 3 cases was in a woman who presented with clinical measles after she had returned from a trip to India. She was hospitalized briefly but recovered and did well. Measles subsequently developed in 2 unvaccinated children with whom she came in contact. One of these children was a seventh grader who potentially exposed more than 200 people at a private school. An investigation by the Department of Health revealed that many other children at the school had not been vaccinated. Fortunately, the case occurred at the end of the school year, so the exposures were short-lived. The school held a vaccination clinic and required students who had not been vaccinated to stay off school grounds. No further cases have been reported, and this outbreak is hopefully over.

From January 1 through June 17 of 2011, 156 cases of measles were reported in the United States.1,2 This is the highest number reported in this time period since 1996. Most cases were associated with importation from other countries; many cases involved US residents traveling abroad. Of the total number of case-patients, 133 (85%) were unvaccinated or their vaccination status was undocumented.1

HOW TO COUNSEL PARENTS OF YOUNG TRAVELERS 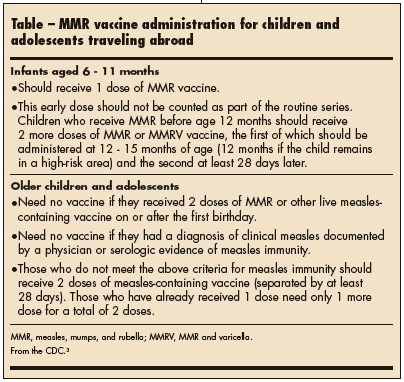 Many parents who ask their child’s pediatrician for travel advice are typically concerned about the risk of exotic diseases, such as malaria and typhoid. However, this concern should also extend to vaccine-preventable diseases, such as measles. A risk of exposure to measles has long been associated with travel to the developing world but also exists in developed countries. In France, more than 7500 cases of measles were reported in the first 3 months of 2011, and thousands of cases have been reported in Switzerland over the past several years.3 This recent increase in measles should prompt pediatricians to exercise the same caution for measles as they would for exotic diseases and ensure that children are immune to measles before they travel.

The CDC recently posted a travel notice regarding MMR vaccination in children traveling outside the United States (Table).3 Infants younger than 6 months are probably immune to measles because of antibodies they received transplacentally from their mother. MMR vaccine is not administered before 6 months of age. However, if an infant in this age group is exposed to a household or other close contact with measles, intramuscular immune globulin can be given within 6 days of exposure to prevent or modify measles. If a returning international traveler shows signs and symptoms, such as fever, cough, red eyes, runny nose, and a typical morbilliform rash (Figure), clinicians should consider measles in the differential diagnosis and take appropriate precautions to prevent transmission. 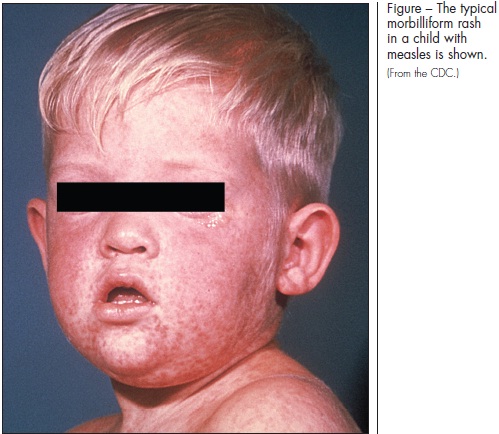 A NOTE OF CAUTION ON PARENTAL VACCINATION REFUSAL
For some of us graying pediatricians, who grew up before licensure of the measles vaccine in 1963, measles was a normal childhood rite of passage. Virtually everyone became infected with measles in early childhood after the protective antibodies acquired from our mothers had waned. Those of us who can remember having the infection often recall high fever, prolonged cough, and the few long days spent in a darkened room with the shades drawn because of photophobia. The great majority of those with measles— then and now—survive. Thus, it is often easy to forget that measles can be fatal, especially in developing countries. Worldwide, it is estimated that measles still accounts for more than 150,000 deaths among infants and young children each year.4

In the United States and other developed countries, most parents of young children—having grown up in the post-vaccine era—have not experienced or seen measles and are not familiar with the potential seriousness of the disease. For this and other reasons, some parents elect not to have their children vaccinated. Some may still believe that adverse consequences of measles vaccination (eg, the discredited vaccine-autism link) might outweigh the danger of the illness itself. To complicate matters, many states offer parents philosophical or personalbelief exemptions to vaccination. In Washington State, such philosophical exemptions are now taken by more than 5% of parents with children entering kindergarten.5

So long as the majority of other children still receive the MMR vaccine, the risk of a measles outbreak remains modest. However, as the number of “free-riders” increases, so does the likelihood of sustained transmission after an exposure. Measles is so contagious that outbreaks have been described in schools where reported immunization levels were very high. Pediatricians—especially the ones who remember measles personally—can help serve their communities by reminding parents that measles is a serious disease and that high vaccination coverage, particularly among preschool and school-aged children, is essential to maintain measles elimination in the United States.5