Mastoiditis as a Complication of Untreated Otitis Media

A 46-year-old man with a past medical history of hypertension was transferred to the intensive care unit (ICU) from a nearby emergency department (ED) due to altered mental status.

History. The man had no family history of diseases and lived with his wife and 2 young children. All of the patient’s history was provided by his wife, given his altered mental status. She denied any drug, alcohol, or tobacco use by her husband.

She stated that he had been complaining about ear fullness for 1 to 2 months. He had developed symptoms of a cold 4 days prior but had not been seen by a health care provider until he had developed severe left ear pain 2 days prior. At that time, he had been seen in a nearby ED, where he had been given numbing drops and corticosteroid eardrops and had been sent home. He returned a few hours later, however, after having noted purulent, bloody drainage from his left ear.

He received a diagnosis of a ruptured eardrum and acute otitis media (OM), was given a 2-g injection of ceftriaxone, and was discharged home from the ED with amoxicillin/clavulanate and hydrocodone/acetaminophen. Throughout the day, he became progressively more irritable and combative, and he began experiencing hallucinations. By the next morning, he was minimally responsive and was brought to the ED for a third visit.

Magnetic resonance imaging scans (Figure 1) and computed tomography (CT) scans (Figure 2) taken during the ED visit showed left-sided mastoiditis and cerebritis in the left temporal lobe. At this time, he was given intravenous ceftriaxone and vancomycin, blood cultures were drawn, and he was intubated before transfer to a nearby ICU. 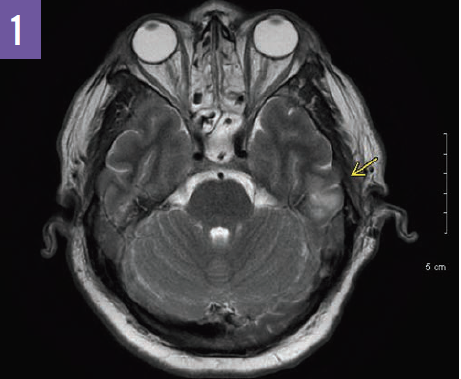 Figure 1. Magnetic resonance imaging of the head showed cerebritis in the left temporal lobe, denoted with a yellow arrow.

Figure 2. A CT scan of the head showed left-sided mastoiditis, denoted with a yellow arrow.

Physical examination. At admission to the ICU, he was febrile at 39.2°C, and his blood pressure was mildly elevated at 147/103 mm Hg. His pulse was 118 beats/min, and his respiratory rate was 18 breaths/min, with an oxygen saturation of 99% on a ventilator. His left tympanic membrane was bulging and erythematous, with bloody purulent drainage visualized in the canal. His right tympanic membrane was erythematous with a clear canal. He had been intubated and sedated and was unable to follow commands.

Treatment. Ciprofloxacin/dexamethasone eardrops were started at the time of admission, with intravenous vancomycin and cefepime for broad-spectrum antibiotic coverage. After initial placement of myringotomy tube, left mastoidectomy was performed without complications on day 2 of hospitalization. Because of continued fever, the antibiotic regimen was changed to vancomycin and meropenem on day 4. Antibiotics were continued for a total of 11 days, during which time the patient remained afebrile.

Outcome of the case. Following a 22-day hospital course, the patient was discharged home in stable condition. Although he continued to experience dysphagia, he had no other residual neurologic deficits, and he did not require long-term rehabilitation. A tracheostomy tube was placed after several failed trials of extubation. The patient was able to return home with his wife, with routine follow-up visits scheduled with his primary care physician.

Discussion. OM is commonly seen in the primary care setting, affecting approximately 80% of children and contributing to approximately $4 billion in annual health care costs in the United States alone.1,2 However, it is so rarely diagnosed in older age groups that no clear guidelines are available for its management in adults.

The rise of antibiotics has greatly decreased the incidence of complications from OM. While preantibiotic complication rates were as high as 20% to 50% with a high associated mortality rate, complications are now seen in only 0.004% to 3% of cases, depending on the country studied.1,3-5 However, as antibiotic resistance continues to be an emerging global public health concern, knowledge of these potential complications of OM becomes increasingly important.1

Mastoiditis is the most common complication of OM, and it occurs almost exclusively as a result of this infection.1,3,5 Symptoms most commonly include fever, otalgia, otorrhea, and postauricular pain, especially otalgia or otorrhea present for greater than 2 weeks.4,5

While the diagnosis of mastoiditis is primarily clinical, CT scans should be considered for further evaluation of the temporal bone.

Treatment usually involves mastoidectomy and antibiotic coverage for organisms that commonly cause OM.4 It should be noted that even with adequate treatment, intratemporal complications such as mastoiditis carry a mortality rate of 1.3% to 5%, and a risk of hearing loss of up to 26%.3

Although it uncommon, the complications of OM should be included in the differential diagnosis for patients experiencing concerning or prolonged symptoms, especially if the symptoms are unimproved with antibiotics.