ABSTRACT: A 44-year-old woman with a history of chronic schizoaffective disorder, epilepsy, social phobia, anxiety, and panic attacks presented with concern for “feeling anxious.” After a history, physical examination, and laboratory tests, the woman received a diagnosis of treatment-resistant schizophrenia. While clozapine is the standard therapy for schizophrenia, certain patients such as the woman in this case do not respond well to clozapine monotherapy, requiring clozapine to be augmented with other antipsychotics or antidepressants. This case outlines the unique challenges of managing patients with treatment-resistant schizophrenia, especially when they present with comorbid conditions such as epilepsy that can limit treatment options. A multipronged approach, including pharmacologic therapy as well as cognitive behavioral therapy, should also be considered.

Our patient was a 44-year-old woman with a history of chronic schizoaffective disorder, epilepsy, anxiety, social phobia, and panic attacks. She presented to the hospital from her assisted-living facility with concern for “feeling anxious”; she claimed that her husband had secretly videotaped them having intercourse and that he had revealed the video to others.

Although she denied having homicidal and suicidal ideation, during her hospital stay she asked the interviewer to kill her. She also denied having tactile, auditory, or visual hallucinations, although she seemed to be responding to internal stimuli during the interview. She reported having difficulty sleeping and concentrating. She displayed both positive and negative symptoms of schizophrenia: positive symptoms included a disorganized thought process, suspiciousness, severe delusions, and auditory hallucinations; negative symptoms included insomnia, irritability, depressed mood, and lack of motivation.

The patient had 6 previous visits to our hospital with similar psychotic episodes in the span of 2 years, with the most recent having been 1 month prior to presentation.

Her medications included clozapine, temazepam, risperidone, and topiramate, although she said that she had discontinued her clozapine 1 week ago; upon admission, her blood clozapine levels were found to be zero. She was allergic to haloperidol and valproic acid; both medications had been associated with the development of a rash.

She had first developed schizophrenic symptoms at age 14, and they had worsened throughout the years. She had received a diagnosis of treatment-resistant schizoaffective disorder 10 years ago after having failed to respond to treatment with 6 weeks of olanzapine and 6 weeks of risperidone alone. She subsequently had responded well to clozapine alone until last year.

She had no family history of psychiatric disease. She currently was not undergoing psychotherapy, although she had tried cognitive behavioral therapy (CBT)sparingly 7 years ago.

Mental status examination findings at the time of admission revealed a person who was oriented to person and place but not to time. She looked older than her age, and she had a suspicious demeanor, with poor eye contact. Her hygiene was unkempt, she spoke at a fast rate, and her mood was irritable. Her speech and thought process was disorganized, and her thought content included obsessive thoughts and paranoid delusions. On admission, she denied having any auditory or visual hallucinations, but throughout her stay she reported having had multiple auditory command hallucinations from God.

Physical examination. The patient was evaluated at bedside by the psychiatric team. Her vital signs were as follows: body temperature, 36.7°C; respiratory rate, 18 breaths/min; blood pressure, 126/76 mm Hg; pulse, 86 beats/min. She had a normocephalic atraumatic head. The pupils were equal, round, and reactive to light and accommodation. Hearing was intact. The oropharynx was clear. Vision was intact, with visual acuity 20/20. Her neck was supple, with no jugular venous distension and no thyromegaly, masses, or bruits.

Cardiovascular system examination revealed regular rate and rhythm; normal S1 and S2 heart sounds; no murmurs, rubs, or gallops; and a nondisplaced apical impulse. She had normal breathing effort, and no rales, rhonchi, or wheezing; the chest wall was not tender to palpation. Abdominal examination revealed normal bowel sounds and a soft nontender abdomen, with no guarding or hepatosplenomegaly.

Examination of the patient’s extremities revealed no clubbing or cyanosis. Peripheral pulses were intact bilaterally. The patient had normal range of motion and muscle strength in all extremities, and reflexes were all intact. Cranial nerves II through XII were intact.

Laboratory testing. When the patient was admitted to the emergency department, electrocardiography results showed no abnormalities. Her toxicology screening results were negative for alcohol, barbiturates, benzodiazepines, cannabinoids, cocaine, phencyclidine, opioids, amphetamines, and tricyclic antidepressants. Results of a comprehensive metabolic panel, a complete blood cell count, and urinalysis are summarized in Table 1.

Table 2 outlines our treatment regimen for our patient and its efficacy throughout her 25-day hospital stay, as well as her response to treatment. 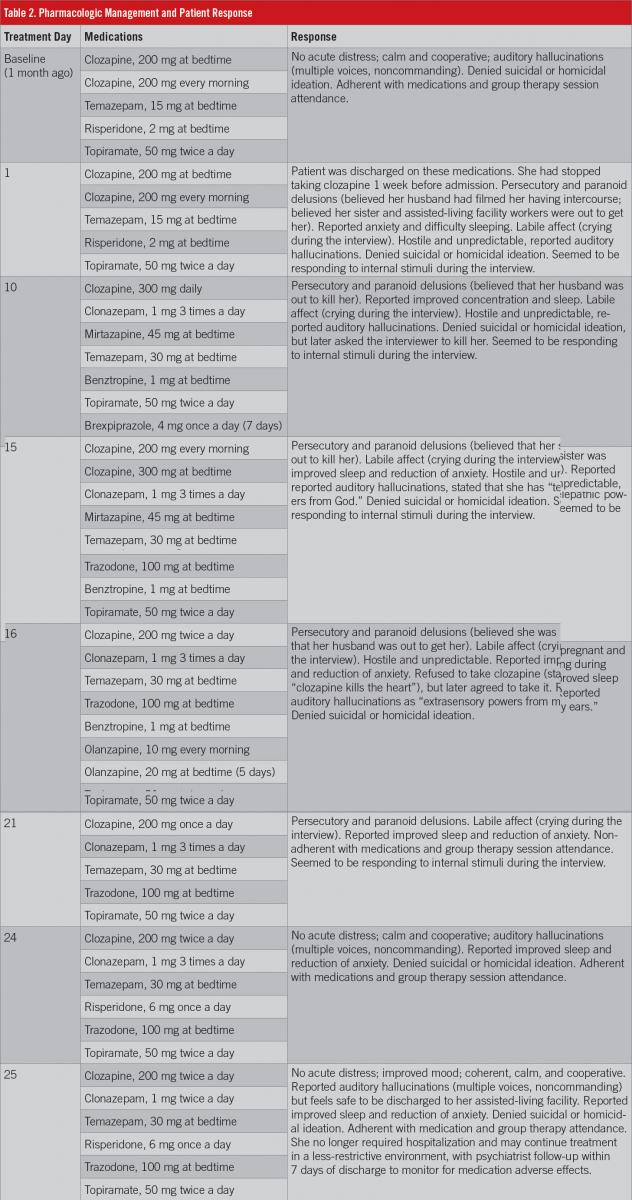 We faced numerous challenges when managing our patient, who had a history of epilepsy and treatment-refractory schizoaffective disorder. Because of her seizure history, we were able to use only a limited dose of clozapine, and we had limited options for antipsychotic medications to augment clozapine. Throughout most of her hospital stay, she was very delusional, fearful, and anxious, and she had difficulty with daily activities because of fear. Her behavior was impulsive, erratic, and unpredictable. She required a restrictive environment, such as the inpatient unit, to avoid decompensation.

According to the International Psychopharmacology Algorithm Project (IPAP) criteria for the diagnosis of treatment-​resistant schizophrenia,1 a patient is considered to be treatment-refractory if he or she has no period of satisfactory emotional and behavioral adjustment in the previous 5 years, if he or she has prior nonresponse to at least 2 antipsychotic drugs of 2 different chemical classes, and if he or she displays moderate to severe psychopathology—especially positive symptoms such as conceptual disorganization, suspiciousness, delusions, or hallucinatory behavior.

Our patient satisfied all 3 IPAP criteria for treatment-resistant schizophrenia: She did not respond well to 6 weeks of olanzapine monotherapy or risperidone monotherapy; she had at least a 5-year period of poor functioning; and to this day, she displays disorganized thought process, suspiciousness, severe delusions, and auditory hallucinations.

Clozapine is the standard therapy for schizophrenia; however, our patient did not respond well to clozapine monotherapy. Granted, she had been taking only 100 mg of clozapine at first, and she initially had responded well to an increased dosage of the medication.

High-dose clozapine therapy has been associated with a greater risk of seizures than medium and low doses2; keeping this in mind, we aimed to not prescribe more than 400 mg/d. Therefore, when she did not respond well to 400 mg/d of clozapine, we had to augment the patient’s clozapine with other antipsychotics or antidepressants.

Prior to her most recent hospitalization, she had responded well to a dosage of 400 mg/d of clozapine augmented with 2 mg/d of risperidone. She was readmitted only 1 month later, however, and we tried other antipsychotics with little success. Granted, we were limited to antipsychotics that are not contraindicated in patients with seizures, such as risperidone, olanzapine, amisulpride, quetiapine, and haloperidol.3

We also used brexpiprazole, a recently released atypical antipsychotic that has been approved by the US Food and Drug Administration to treat adults with schizophrenia and as an add-on treatment to an antidepressant medication to treat adults with major depressive disorder (MDD), due to its increased binding affinity for serotonergic receptors 5-HT1A (as a partial agonist) and 5-HT2A (as an antagonist), as well as its partial agonism of dopaminergic receptors.4 The patient responded well, however, when she was given a larger dose of risperidone (6 mg/d) to augment the 400-mg dose of clozapine.

So why was risperidone effective in augmenting clozapine, unlike olanzapine and brexpiprazole?

One possibility is that risperidone effectively blocks dopaminergic receptors compared with olanzapine and brexpiprazole. Dopamine blockade agents such as clozapine are effective in addressing the positive symptoms of schizophrenia, such as disorganized thought process, suspiciousness, severe delusions, and auditory hallucinations, all of which our patient exhibited. Clozapine displays some efficacy in dopamine receptor blockade. Employing this logic, however, we can deduce that aripiprazole and amisulpride—atypical antipsychotics that effectively block dopamine receptors—could also augment clozapine in our patient. Aripiprazole and amisulpride also are not contraindicated in patients with seizures. Both of these medications are promising adjuncts to clozapine for patients with comorbid epilepsy and treatment-refractory schizophrenia.

Porcelli and colleagues’ research6 on clozapine augmentation strategies confirms our postulate that amisulpride along with risperidone is effective for augmenting clozapine in cases of clozapine-resistant schizophrenia. Ziprasidone is another antipsychotic that can be used to augment clozapine, as is the antidepressant fluvoxamine.

Mood stabilizers such as lamotrigine, topiramate, lithium, and valproate are interesting augmentation strategies for clozapine in patients with comorbid epilepsy and treatment-refractory schizophrenia; these mood stabilizers not only will augment clozapine, but also they can address epilepsy symptoms. As such, our patient might benefit from a switch from topiramate to lamotrigine, given that more studies have shown positive outcomes with lamotrigine augmentation than with topiramate augmentation. Were our patient not allergic to valproate, that medication also could be a beneficial addition, since it also addresses anxiety and depression.

Another challenge that we had to overcome in the management of this patient’s case was treatment nonadherence. A longer duration of untreated psychosis in the early stage of schizophrenia is associated with a longer time to remission, a lower level of recovery, a greater likelihood of relapse, and a worse overall outcome.7 This may explain why our patient needed increased doses of clozapine augmented with other antipsychotics over time. Her hospitalizations invariably occurred weeks after she had self-discontinued treatment with clozapine, and when we attempted to place her on a regimen that had worked in the past, she no longer responded well to it and thus required an increased medication dosage to reach baseline.

Good rapport, as well as making sure the patient understands the rationale behind the treatment regimen, is crucial to prevent treatment nonadherence, as is supervision of a patient’s medication intake, which our patient may not receive in a less-restricted environment such as her assisted-living facility.

Our patient was being treated only with pharmacologic therapy. She reported that she was not undergoing psychotherapy, although she had tried CBT sparingly 7 years ago. CBT is an effective adjunct to pharmacotherapy in treating schizophrenia.8 Pharmacotherapy can make an individual more malleable to CBT, while CBT can provide the patient with coping strategies for dealing with hallucinations and address deeply ingrained delusions.

Managing patients with treatment-refractory schizophrenia can be challenging, especially if they present with comorbid conditions such as epilepsy that can limit treatment options. This case report outlines the unique challenges faced when managing such a patient. In short, clinicians should consider the augmentation strategies employed in this patient’s case when treating a patient with similar comorbidities. A multipronged approach for managing treatment-resistant schizophrenia, including pharmacologic therapy as well as CBT, should also be considered.

Our patient’s anxiety and difficulty sleeping were managed through the use of benzodiazepines such as temazepam, clonazepam, mirtazapine, and trazodone. Her depression was managed with mirtazapine and trazodone. Her clozapine dosage was adjusted throughout her hospital stay while it was augmented with other antipsychotics to ensure adequate management of her schizophrenia symptoms without requiring a large enough clozapine dose to induce seizures. Additionally, topiramate was prescribed for seizure prophylaxis.

NEXT: Author biographies and references

Juan D. Oms, MD, is the director of the Psychiatry Residency Program at Larkin Community Hospital in South Miami, Florida.

Luxhman Gunaseelan, MS-III, is a student at Saba University School of Medicine in Saba, Caribbean Netherlands.

Golbon Foroughi, MS-IV, is a student at Saba University School of Medicine in Saba, Caribbean Netherlands.

Syed A. A. Rizvi, PhD, is a professor in the Department of Pharmaceutical Sciences, College of Pharmacy, at Nova Southeastern University in Fort Lauderdale, Florida.