A Man With Severe Cirrhosis and Profound Acid-Base Disturbance

A 66-year-old man was brought from home by his family out of concern for his altered mental status and abnormal breathing.

He had a past medical history significant for severe and advanced cirrhosis of the liver as a result of alcohol abuse and hepatitis C. He had had many complications, including variceal bleeding, numerous episodes of hepatic encephalopathy, and ascites requiring frequent paracentesis. He had been evaluated for transplantation but had never been able to achieve the required period of abstinence from alcohol. His family noted a progressive lethargy and obtundation beginning 2 to 3 days ago, and now he was very difficult to arouse. In addition, the family noted very deep and heavy respirations. The man’s only regularly used medications were lactulose and diuretics.

Physical examination revealed an obtunded man who was difficult to arouse and was disoriented to time, place, and person. Temperature was 37.8°C, pulse was 100 beats/min, blood pressure was 90/60 mm Hg, and Kussmaul respirations were at 18/min. There was slight scleral icterus.

His chest was clear, and his heart was in regular rhythm, without murmurs or gallop. Gross ascites was present. His skin had multiple spider angiomas, and he had bilateral leg edema. Neurologic examination revealed altered mentation without focal findings. Beats of asterixis of the wrists were elicited.

Which one of the following statements about this clinical vignette is most accurate?

A. The level of lactic acidemia and its duration are poorly correlated with prognosis in such situations.

B. Control of the triggering conditions is the only effective treatment.

C. The serum anion gap is extremely sensitive and specific as a screening tool for lactic acidemia, such that a normal anion gap rules out the condition.

D. A state of generalized tissue hypoxia is required to initiate and sustain lactic acidosis.

Answer: B. Control of the triggering conditions is the only effective treatment.

The patient presented here is manifesting lactic acidosis, an extremely morbid and dangerous acid-base disturbance. In lactic acidosis, a disturbance in the pyruvate-lactate metabolism results in an increase in lactate production (and proton generation in an equivalent amount) that exceeds the body’s capacity to consume the lactate and to balance the excess protons via available base in the form of bicarbonate. A wide variety of disorders can trigger this process, but this array can be sorted into 3 major pathophysiologies:

Tissue hypoxia on a systemic or localized basis. This is the case with cardiogenic or hypovolemic shock syndromes, such as with acute myocardial infarction or severe trauma, wherein profoundly diminished oxygen delivery to tissues results in enhanced anaerobic pathway recruitment.

Sepsis. Sepsis is believed to cause decreased oxygen delivery on a microcirculatory basis, with similarly deranged and increased anaerobic metabolism. Both tissue hypoxia/low-flow states and sepsis also recruit an epinephrine response with vasoconstriction, which makes matters worse.

The use of drugs that impair normal, aerobic oxidative phosphorylation. This pathophysiology includes antiretroviral nucleoside reverse-transcriptase inhibitors, metformin, and toxic alcohols such as ethylene glycol (antifreeze) and propofol in the anesthesia suite. In these instances, tissue oxygenation is not the problem. Rather, the offending agents pharmacologically interfere with normal aerobic oxidative phosphorylation and thus drive metabolism toward anaerobic glycolysis and its enhanced production of lactate. Thus, Answer D is not a correct statement.

An additional confounding factor is severe liver disease, wherein the liver is unable to metabolize lactate normally, which will worsen any of the situations mentioned above. Such was the presented patient’s case when, in the setting of advanced and severe hepatic failure, an episode of sepsis occurred to trigger the lactic acidosis episode. In clinical practice, cardiogenic or hypovolemic shock, severe heart failure, severe trauma, and sepsis are the most common cause of lactic acidosis and account for the vast majority of cases.1

The clue to the presence of lactic acidosis is an enlarged anion gap, especially one greater than 30 mEq/L. However, this finding is neither sensitive enough nor specific enough to “confirm” the diagnosis or even suffice as a screening tool. In fact, many cases of subsequently confirmed lactic acidosis will not initially have an elevated anion gap.1 This makes Answer C incorrect. Therefore, the definitive method of diagnosing lactic acidosis is to measure lactic acid and demonstrate an elevated level. Lactate levels also are helpful in defining prognosis and monitoring therapy. These facts make Answer A an incorrect statement, as well.

Regarding therapy, aggressive general measures to support the circulation (appropriate pressors, inotropic agents, crystalloid and colloid solutions) and to enhance oxygen delivery to tissues (maintain adequate hemoglobin and partial pressure of oxygen) are mandatory. Administration of base (bicarbonate) is almost uniformly used in an attempt to balance the acidic serum, with a target pH of 7.2 being the most empirically used goal.2,3 Data for efficacy of this is surprisingly sparse and unproven2,3—a fact that surprised this author, who has used this maneuver so many times over the years.

The major therapeutic goal and the maneuver that most definitively and strongly determines outcome, however, is to control and reverse the triggering mechanism or condition.1,4 Examples include treating sepsis with debridement and antibiotics as appropriate, left-ventricular assist devices for congestive heart failure, coronary artery interventions for acute myocardial infarction, surgery for trauma and ischemic bowel, and dialysis to remove offending drugs.1,4 Therefore, Answer B is most accurate here.

A diagnostic paracentesis was quickly performed, and the results indicated a polymorphonuclear leukocytosis in the cloudy ascetic fluid, consistent with spontaneous bacterial peritonitis. Appropriate antibiotics were quickly administered. A second serum lactate level returned at 10 mmol/L. Aggressive fluids and supplemental bicarbonate were administered, but the situation was complicated by the patient’s coexisting liver-related volume overload and anasarca. He continued to deteriorate, with worsening of lactic acidosis and circulatory collapse, and he died the second day after admission. All ascites and blood cultures subsequently grew Escherichia coli. 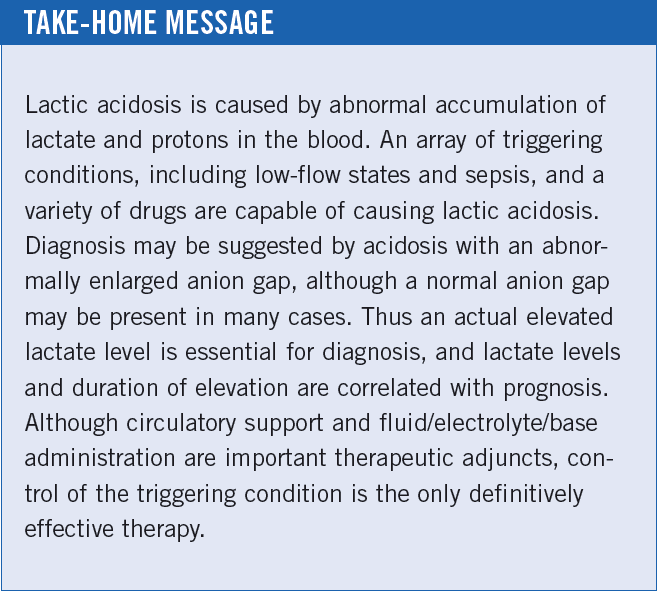