A 36-year-old man serving in the military presented with persistent right upper quadrant (RUQ) abdominal pain, which initially had been diagnosed as an abdominal strain resulting from heavy lifting approximately 1 month previously. The pain had worsened since then, particularly postprandially, despite empiric trials of omeprazole and behavioral modifications (reducing coffee intake and eliminating alcohol intake).

Ultrasonography (US) was performed (Figure 1), the results of which prompted computed tomography (CT) scanning. CT scans revealed a hepatic cystic structure measuring 19 × 13 × 18 cm, with enclosed daughter cysts measuring up to 5 cm in diameter (Figures 2 and 3). These findings initially were thought to be consistent with hydatid cyst (parasitic infestation by the tapeworm Echinococcus granulosus), given the man’s deployment history to Iraq, and empiric albendazole treatment was started. However, Echinococcus antibody test results returned as negative.

Ultimately, he underwent resection, during which a 2.3-kg mass with 55 secondary cystic structures, each filled with keratinaceous material, was removed (Figures 4 and 5). The mass was noted to have been encroaching upon the common hepatic artery, the gallbladder, and the common bile duct. 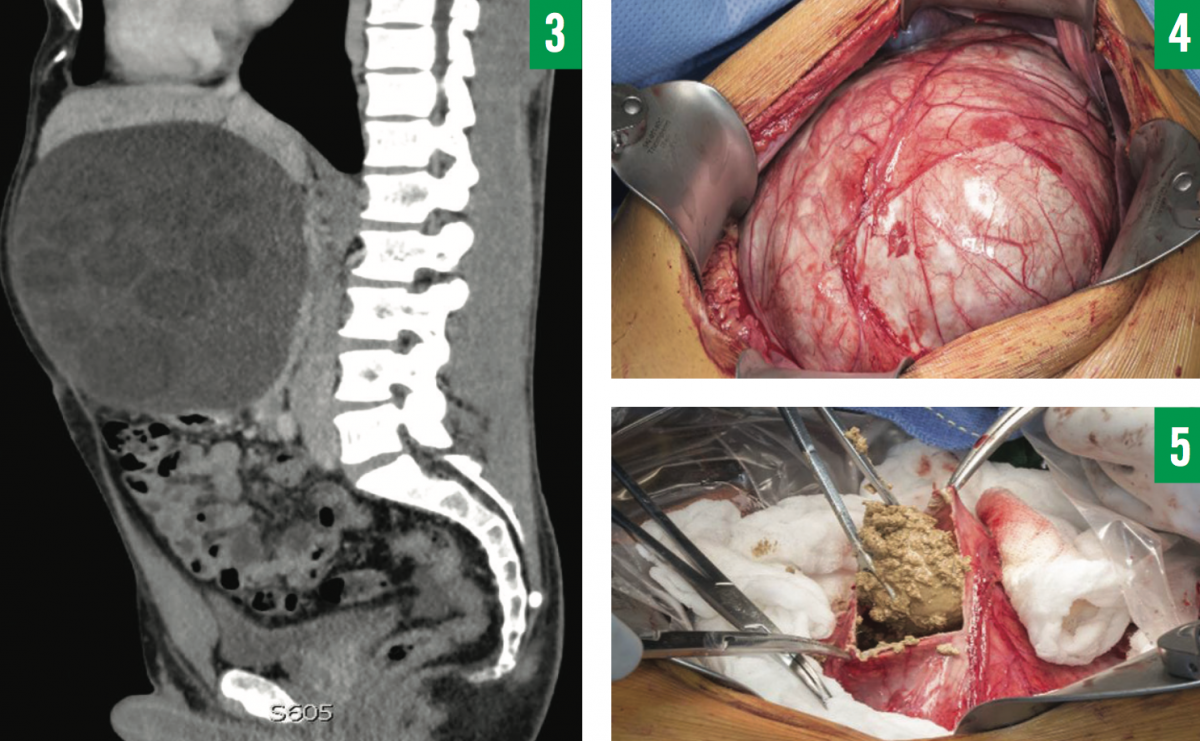 The term teratoma, from the Greek teratos (“monster”), was established by Virchow in 1863. Later, the term dermoid cyst was also used to describe these growths, which occur as infrequently as 1 per 1 million births.1,2 Hepatic teratomas account for only 1% of all teratomas, and as of 2014, only 28 cases had been reported.3,4 Most hepatic teratomas are encountered in pediatric patients younger than 3 years.5 With such rarity, coverage in the literature is generally confined to case reports.

Teratomas derive from at least 2 of the 3 germ cell layers—ectoderm, mesoderm, and endoderm—but definitional variation exists thereafter, including possible organ formation.6 Normally, pluripotent cells follow the urogenital ridge and descend inferiorly during embryologic development, eventually becoming ovaries or testes.1 This path explains why most teratomas are found on the midline, such as in the gonads, mediastinum, and retroperitoneal regions.1 Teratomas occur due to abnormal cell migration during organogenesis—halted in cases of gonadal tumors, and drifting outside the urogenital ridge pathway in extragonadal cases.3 These germ cell foundations can create organ or organlike structures without homogeneity and irrespective of the surrounding systems; they can include bone, hair, skin, sebum, fat, muscle, and neural tissues.6

Teratomas are broadly classified as mature or immature; the latter are generally larger in size (14-25 cm at presentation, compared with 7 cm) and exhibit greater malignancy potential.1 Histopathologic examination of tumor tissue therefore is essential for management, observation, and prognosis. Mature teratomas have been estimated to grow at an average rate of 1.8 mm per year,1 resulting in an indolent onset/progression of symptoms.

When symptoms develop, pain predominates, usually as a result of compression on nearby systems. Abdominal pain can be secondary to rapid degeneration of the tumor or compression on gastrointestinal tract structures,6 and these scenarios could be accompanied by distention, nausea, and vomiting. Most hepatic teratomas are discovered incidentally,3 but the associated mass effect could mimic hepatic dysfunction, with pain, jaundice, or vascular congestion. Gallbladder compression could simulate cholelithiasis symptoms of postprandial pain.

Given this insidious presentation, teratomas reportedly have measured up to 27 cm upon discovery.2 Of 8 case reports reviewed, only 1 patient did not report symptoms related to mass effect.3 A 27-year-old woman presented with cough, rhinorrhea, and wheezing; CT scans for possible bronchopulmonary disease instead revealed an incidental hepatic teratoma (the respiratory tract symptoms were believed to be unrelated to the teratoma).3

Most teratomas are discovered incidentally on imaging. Plain radiographs may reveal slight changes with soft tissue masses, more likely to be seen if there are calcifications, which have been described as “rim-like” or “chunky.”3 In patients with RUQ abdominal pain, providers may begin with RUQ US, depending on its availability. US findings of a teratoma can vary based on underlying tumor composition. Hypoechoic or anechoic portions generally represent cystic components, whereas hyperechoic areas could indicate calcifications or fat.3 Depending on size, composition, and presentation, these findings could prompt differential diagnoses of cystic disease, including hydatid cyst. The embryologic origins and greater frequency of teratomas in the gonads suggest additional US imaging of these areas to rule out distant masses, regardless of initial location of the teratoma.

US imaging findings should prompt abdominal CT, which is considered a superior modality because it can better differentiate and delineate areas of cystic fluid and fat (low-attenuation) with calcifications (high-attenuation) to refine the differential diagnosis and clarify hepatic involvement. A horizontal edge between an attenuation of fat and a more-dependent fluid is considered to indicate sebum,7 which some have postulated as being pathognomonic for teratoma.6 Some case reports have described the use of magnetic resonance imaging, but CT is noted as sufficient to proceed for resection.

Treatment of teratomas centers on excision, either laparoscopically or by open laparotomy. Complete resection is aided by the fact that teratomas are usually well-encapsulated.6 Full resection enables histopathologic analysis, which directs adjunct therapies, monitoring, and prognosis.1,5,8 Like all hepatic growths, teratomas are concerning for involvement and invasion of gastrointestinal tract structures, including vasculature and the biliary tree. Case reports have noted involvement of the hepatic artery,9 the diaphragm, lung parenchyma, and pericardium.8 Adjunctive chemotherapy is used with immature teratomas.8

Postoperative recovery depends on the treatment method, the organ system involvement, the depth of the teratoma, and associated complications. Serial laboratory tests and imaging monitor for recurrence, generally at 3- to 6-month windows, with intervals increasing if findings are persistently negative. The prognosis depends on tumor maturity, with immature teratomas being more concerning for malignancy. Only 1 group of authors reported a patient’s death following resection, involving an immature hepatic teratoma in a 21-year-old woman who died 7 months postoperatively after hepatic recurrence and spreading metastases.8

Postoperatively, our patient reported generalized abdominal pain during his recovery, but he remained on active duty and eventually fully recovered. During subsequent consultations, an oncologist suggested surveillance with abdominal US at 6 and 12 months postoperatively, then again at 24 and 48 months if the findings continued to be negative for recurrence. Follow-up laboratory tests revealed no elevations in AFP or hCG levels, and subsequent imaging has revealed no recurrence to date.

Brandon M. Carius, PA-C, is a battalion physician assistant and Captain in the US Army with the 1st Infantry Division at Fort Riley, Kansas.

Ronald D. Anderson, DO, is an internal medicine physician and Major in the US Army with the 1st Infantry Division at Fort Riley, Kansas.

Brian K. White, DO, is an infectious disease physician and Lieutenant Colonel in the US Air Force at San Antonio Military Medical Center in San Antonio, Texas.