A Man With Chest Tightness and Syncope: What’s the Best Approach?

ACKNOWLEDGEMENT:
The author thanks radiologist Claude Frey, MD, and cardiologist Susan Wilansky, MD, at Mayo Clinic Scottsdale, Arizona, for their assistance in the management of this case.

A 37-year-old man with a history of obesity, hypertension, and hyperlipidemia presented to the clinic with intermittent chest tightness upon exertion for the past 3 weeks. He also recalled having blacked out while exercising on a treadmill and having been awoken by paramedics approximately 4 weeks ago.

At presentation, his blood pressure was 131/97 mm Hg, heart rate was 96 beats/min, respiratory rate was 16 breaths/min, and oxygen saturation was 97% on room air. 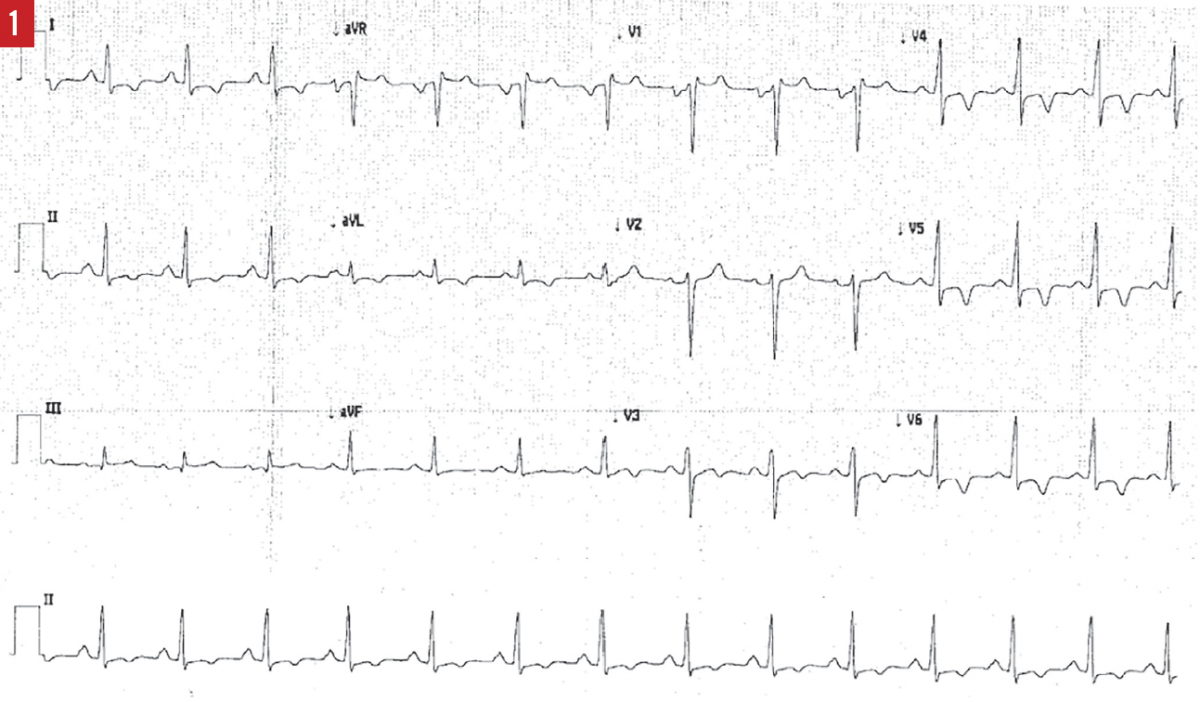 Which of the following would be the best approach?

Answer: B. Obtain an echocardiogram

This patient’s diagnosis is apical hypertrophic cardiomyopathy (HCM). The presence of ECG findings indicative of left ventricular hypertrophy with T-wave inversions and loss of septal Q-wave should raise strong suspicions for apical HCM.1,2 These signs are considered pathognomonic for the disorder.

He underwent an echocardiogram, which clearly showed apical hypertrophy measuring 2.5 cm in diameter. He also underwent a cardiac catheterization, which showed no angiographic evidence of obstructive coronary artery disease and confirmed the spade-like contraction of the left ventricular apex in both systole and diastole (Figure 2). 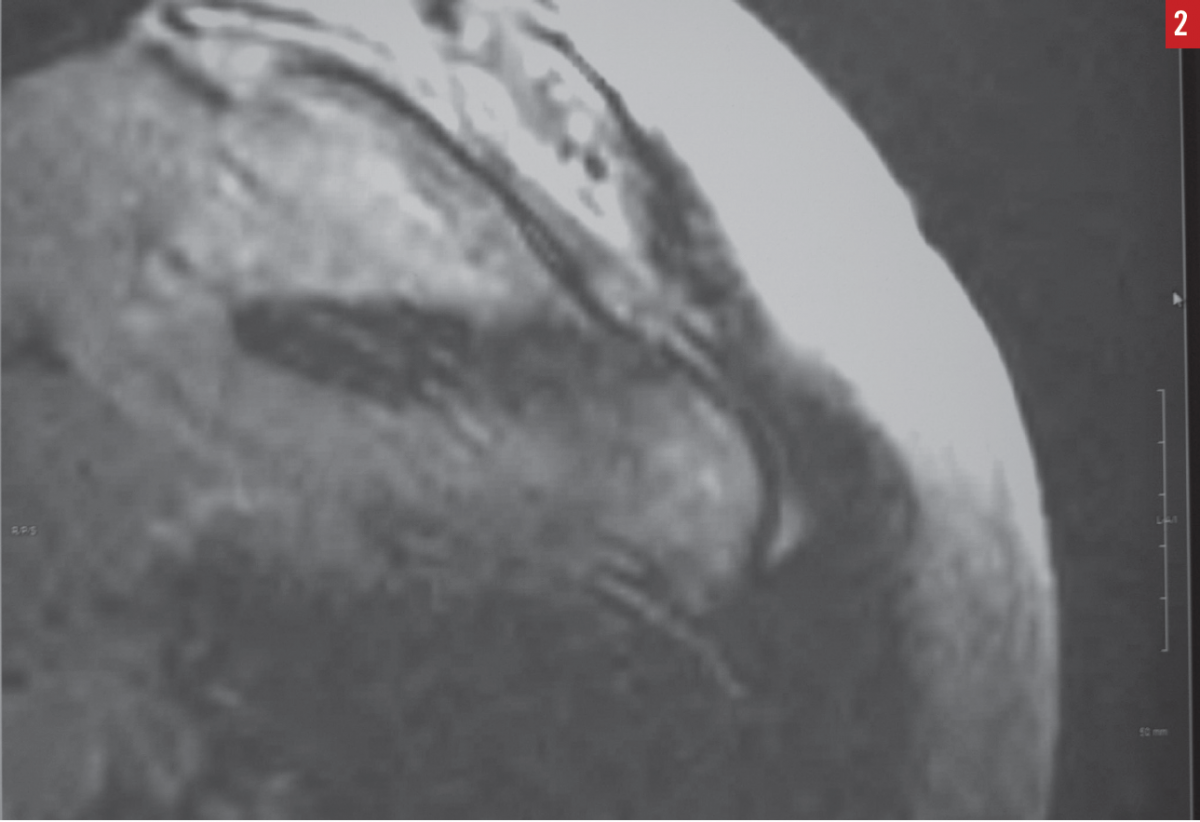 Given the man’s history of a syncopal episode and the presence of apical HCM, an electrophysiology evaluation was warranted. Although the patient did not experience sudden cardiac arrest, he was deemed a candidate for an implantable cardioverter defibrillator (ICD) as a class IIA indication for primary prevention of sudden cardiac death (SCD).3,4

The patient also underwent cardiac MRI, the results of which showed significant diffuse fibrosis within the left ventricle. The patient was advised to maintain adequate hydration and to avoid caffeine and alcohol, and he was placed on oral metoprolol 25 mg twice daily for symptomatic relief to increase diastolic filling and decrease contractility. β-blockers, which are first-line treatment in symptomatic patients, reduce the contractility of the heart, which subsequently reduces the left ventricular outflow tract (LVOT) gradient. β-blockers also reduce overall myocardial oxygen demand and allow for increased diastolic filling by slowing the heart rate. Contraindications to β-blockers include severe bronchospasm, marked bradycardia, and severe conduction system disease.

Our patient did not participate in competitive athletics; however, he was advised to limit himself to mild to moderate intensity exercise to avoid an abrupt increase in catecholamines, which could be a trigger for cardiac arrest. His first-degree relatives were also advised to undergo genetic testing to identify and protect any of them with this condition.

HCM is the most common genetic cardiac condition.5 The apical variant accounts for 25% of total HCM cases in the Asian population and less than 10% in the non-Asian population. HCM can cause cardiac function problems, arrhythmias, pulmonary hypertension, outflow tract obstruction, and congestive heart failure.5 Many patients with HCM are asymptomatic throughout their life,5 and the unfortunate result can be SCD, which has an estimated incidence of 1% per year in this population and higher in certain subsets of patients.5

Although it had been previously believed that the apical variant had a benign prognosis, emerging data show an increased risk for sudden cardiac arrest, fatal arrhythmias, heart failure, and ischemic events in this subset. Given the increased risk, up to 30% of patients receive ICDs when indicated.6 Class I indications for an ICD in HCM are for patients who have documentation of having had cardiac arrest, ventricular fibrillation, or hemodynamically significant ventricular tachycardia.3,4,6 Class IIa indications for ICD placement in patients with HCM are (1) one or more first-degree relatives experiencing SCD likely related to HCM, (2) a left ventricular wall thickness of 30 mm or more, and (3) one or more recent unexplained syncopal events.3,4,6

Apical HCM has differing implications for men and women. According to the results of a Mayo Clinic study7 of the largest non-Asian population of patients with HCM, women had a poorer prognosis than men because they generally presented at an older age and had chronic atrial fibrillation. These patients require an echocardiogram to assess the extent of hypertrophy, valvular lesions, and if present, degree of outflow tract obstruction both at rest and upon exertion.7 Cardiac MRI and transesophageal echocardiography can be useful in assessing the extent of hypertrophy or intramyocardial scarring.8 However, they would not be pursued before an initial transthoracic echocardiogram.7

This patient should not be taken urgently for implantation of an ICD without appropriate structural evaluation of the heart as well as determination of the cause of his syncope, which includes ruling out whether it was secondary to dehydration, hypotension, or arrhythmia.6,9 In addition, it is imperative to determine the presence, etiology, and severity of possible outflow tract obstruction via an echocardiogram. Emergent coronary angiogram is not the correct choice as the first step and would be premature in this case given the patient’s age, ECG findings suggestive of HCM, and the lack of active chest pain during the clinic visit.

Sarika Desai, DO, is a cardiologist at the Arizona Heart Institute in Phoenix, Arizona.