Magnet Ingestion in a Pediatric Patient: A Novel Indication for Nissen Fundoplication

A 23-month-old girl was transferred from a local emergency department (ED) to a metropolitan children’s hospital with concern for foreign body ingestion.

The patient was an otherwise healthy girl who had had an unwitnessed ingestion of several small rare-earth magnetic objects (Bucky Balls) 48 hours before presentation to the ED. The girl had had an apparent choking spell in front of her parents, during which her mother was able to pull two of the magnets out of the girl’s mouth; thereafter, she appeared well without any immediate respiratory distress or feeding difficulties. The parents had noticed no pain, distress, or difficulty in the girl and had waited expectantly for passage of the ingested magnets in the stool. The girl had no reported vomiting, fever, abdominal pain, or diarrhea.

Upon presentation to the ED, the patient was comfortable and had active bowel sounds. Results of a complete blood count, a basic metabolic panel, and a coagulation profile were unremarkable. Abdominal radiographs showed 9 pieces of rare-earth magnets joined to each other in a chain in the left upper abdomen, suspected to be within the stomach (Figures 1A and 1B). The remaining bowel gas pattern was unremarkable, and no free air was identified.

The patient was taken for urgent endoscopy, which revealed a distal esophageal ulceration with 3 visible magnets eroding through the distal esophageal wall (Figures 2A and 2B). On retroflexion, 6 magnets were noted, attached to each other in a “string-like fashion,” going through the gastric fundic mucosa, and likely connected to the magnets seen in the esophagus based on the abdominal radiograph. No frank bleeding was noted.

The patient then underwent an urgent surgical laparoscopic abdominal exploration in the presence of the gastroenterology team. During laparoscopy, a perforation with visible magnets was seen in the posterior aspect of distal esophagus, and a corresponding perforation in the gastric fundus also was noted. These magnets posed an interference risk with the surgical instrumentation, because their magnetic nature would cause them to stick to the graspers and dissectors. An endoscope then was introduced, and the 9 magnets were removed from the gastric cavity using a Roth Net grasping device (Figure 3). The esophageal and gastric perforations then were surgically repaired, and a Nissen fundoplication with a gastrostomy tube placement was performed. The patient was successfully extubated, and gastrostomy tube feedings were initiated on hospitalization day 3. 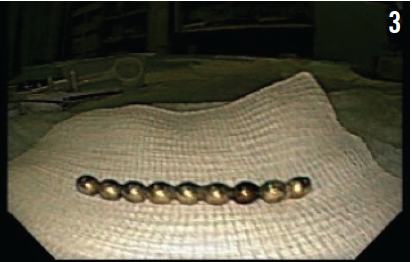 Pediatric ingestion of high-powered, rare-earth magnets is a serious health problem.2,5 These extremely powerful magnets, if ingested, can attract each other from a significant distance while in the digestive tract, causing severe damage to the bowel wall.3

Single piece ingestion behaves like other foreign body ingestion and is often observed to pass spontaneously, but multiple magnet ingestion has been reported to cause serious and life-threatening medical complications. If more than 2 of these magnets are swallowed, their attractive force allows the magnets to “find” each other, sometimes across multiple loops of bowel.6 Multiple magnet ingestion can cause obstruction of the bowel, and necrosis can occur. In such a case, segments of the bowel may have to be surgically removed. Although the tissue of the intestinal tract is tough, it’s no match for these powerful magnets. Deep pressure ulceration can occur within 8 hours of ingestion. Bowel perforation can happen if undetected, which can lead to life-threatening infection.7,12

Children between 13 months and 6 years of age account for almost 50% of reported magnet ingestions. Initial symptoms, such as abdominal pain, can take up to 8 to 24 hours to develop. In our case, the child was essentially asymptomatic. Due to absence of symptoms, the patient faced a delay in receiving medical attention, compounded by lack of parental knowledge about the potential harms of magnet ingestion.

Toddlers tend to swallow these magnetic balls because they are small, shiny, and sometimes brightly colored. Older children and teenagers use these magnets as jewelry piercings in their mouth and nose, which can lead to accidental ingestion. Due to young age and/or lack of witnessed ingestion, asymptomatic presentation, or nonspecific symptoms that can resemble other common ailments, an extended time interval between ingestion and intervention may increase the risk for intestinal perforation. In our case, the child ingested 9 magnets and her parents—although aware of the ingestion—did not seek medical attention.

Contrary to our current understanding of ingestions being more common in children with developmental delays and pervasive developmental disorders, one recent report highlighted a 17-year-old male student-athlete who inserted several dozen of the rare-earth magnets into his urethra, presumably for self-stimulation purposes.8,13 When the aspiring orthopedic surgeon behaved like a bored teenager and had easy access to Bucky Balls, it spelled immense trouble for his health. Our patient is also a well-developed child with no cognitive or developmental delays.

Unfortunately, compelling evidence suggests that the warning labels used in the marketing and packaging of these magnets are ineffective for preventing ingestion by infants, children and teenagers. The North American Society for Pediatric Gastroenterology, Hepatology and Nutrition (NASPGHAN), for this reason, called for a ban on the sale of high-powered magnet sets in 2013. In July 2014, the US Consumer Products Safety Commission (CPSC) announced a recall of all Bucky Balls and Bucky Cubes high-powered magnets.

Pediatric rare-earth magnet ingestion has been responsible for serious gastrointestinal morbidity. The recent popularity of these powerful magnets increases potential risks for children.

This case of magnet ingestion in a toddler demonstrates the gastrointestinal complications posed by these items within the pediatric population. It also highlights the importance of generating awareness among parents and physicians to the potential hazards of magnet ingestion.

Vrinda Bhardwaj, MD, FAAP, is an assistant professor of clinical pediatrics at the University of Southern California’s Keck School of Medicine in Los Angeles, California.

Quin Liu, MD, is an assistant professor of clinical pediatrics at the Keck School of Medicine at the University of Southern California and the attending director of interventional endoscopy  in the Division of Pediatric Gastroenterology, Hepatology, and Nutrition at the Children’s Hospital of Los Angeles.