Maculopapular Rash After Otitis Media in a 10-Month-Old

A 10-month-old girl presented to the pediatric clinic with a 2-day history of an erythematous maculopapular rash all over her body. The girl had been seen 7 days previously at an acute care clinic, where she had received a diagnosis of acute otitis media for which she had been prescribed a 10-day course of twice daily amoxicillin. 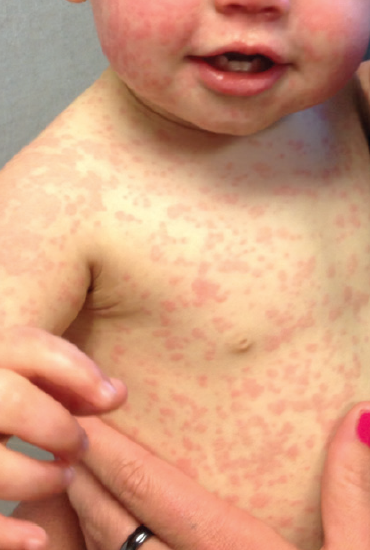 The girl initially had tolerated the medication well, but 5 days into treatment, she developed a diffuse rash on her stomach and back. The next morning, on day 6, the rash covered her entire trunk and had spread peripherally to her scalp and extremities, including her palms and soles. Concerned about the rash’s progression, the mother contacted the pediatric clinic that evening. 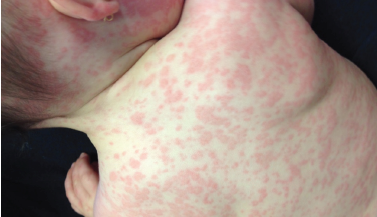 How would you advise the mother?

ANSWER: Have her discontinue the amoxicillin.

During her call to the pediatric after-hours clinic, the girl’s mother was advised to stop giving the amoxicillin because of a suspected allergic reaction, to begin giving diphenhydramine 1 mg/kg every 6 hours, and to follow up with the pediatrician in the morning. As instructed, the mother gave her daughter 3 doses of diphenhydramine to help alleviate the rash before bringing her in for examination the following morning. The patient had completed 6 days’ worth of the antibiotic before it was discontinued.

During the visit to the pediatrics clinic, the mother stated that the infant had not had fevers, chills, night sweats, nausea, diarrhea, nor decreased appetite. The mother had not noticed any swelling of the girl’s tongue or lips, nor had she noted any wheezing or trouble breathing.

The mother said her daughter had been somewhat “fussy” the day before but had not been scratching her rash. The girl had had an episode of posttussive emesis 3 days before presentation, but her mother felt that the cough was resolving. The mother also reported that her daughter had had a 3-day history of congestion and green nasal discharge. The girl had no known allergies and had never before been treated with amoxicillin.

On presentation, the girl’s temperature was 36.5°C, and she weighed 9.129 kg, placing her in the 58th percentile. On general appearance, she was happy and smiling as she sat in her mother’s arms.

HEENT examination revealed a fontanelle that was open and flat. Her eyes were clear, without scleral or conjunctival erythema. She also had no tearing or discharge. She had no erythema of her ears, nose, throat, or mastoid processes, or swelling of her lips or tongue. Both tympanic membranes were clear, without erythema, and were well insufflated. She had thick, clear, nonpurulent, mucous discharge in the nares bilaterally. Her tonsils were not enlarged, and she had no overlying exudates or erythema.

Cardiovascular examination revealed normal S1 and S2 sounds with a normal rate and regular rhythm. No murmurs, rubs, or gallops were detected. Her lungs were clear to auscultation bilaterally, without wheezes, crackles, or rhonchi. Her abdomen was soft, without tenderness or evidence of hepatosplenomegaly.

Results of the skin examination were significant for diffuse, discrete, scattered, blanchable, maculopapular, erythematous lesions involving the trunk, scalp, face, and extremities, including the palms and soles. Some areas had confluent macules with central pallor, while in other areas the lesions were slightly raised and discrete. There was neither discharge nor excoriation associated with the lesions.

Based on these findings, the patient received a diagnosis of classic type IV delayed-type hypersensitivity to penicillin, specifically to amoxicillin.

Delayed hypersensitivity is a T cell–mediated reaction that usually occurs after multiple doses of an antibiotic, generally days to weeks after treatment. It most often occurs as a nonpruritic rash with the characteristic appearance and distribution seen in our patient. A delayed hypersensitivity rash typically is maculopapular or morbilliform, starting on the trunk and spreading peripherally, as was the case with our patient. It is differentiated from a type I immediate hypersensitivity (IgE mediated) reaction, which begins within hours of treatment, usually is pruritic, and can progress to acute anaphylaxis (Table). 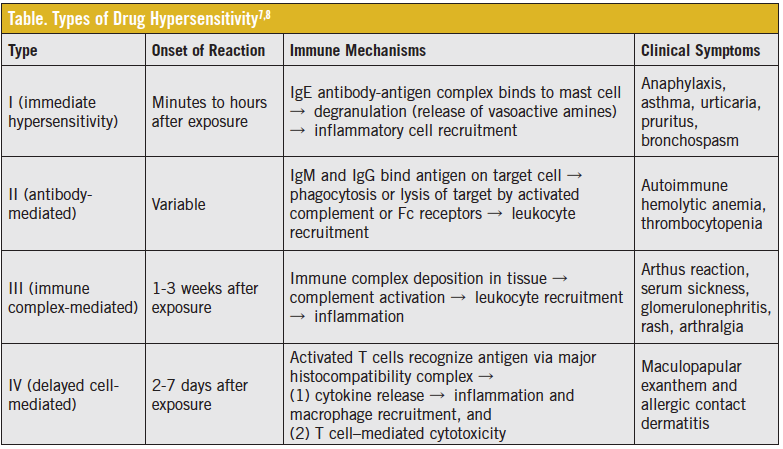 Delayed hypersensitivity rash is very common in pediatric patients, occurring in more than 7% of 3,469 children treated with amoxicillin or penicillin in a recent study.1

Treatment generally is supportive and includes discontinuing the offending agent whenever possible. Additional treatment consists of antihistamines and/or glucocorticoids. However, the role of antihistamines and corticosteroids is controversial given that the mechanism of type IV hypersensitivity is not associated with histamine release.2 Antihistamines can be helpful in type I reactions, and corticosteroids can be helpful in both type I and type III reactions.

Type IV delayed hypersensitivity rash is self-limited and occurs commonly with the use of many penicillin-like antibiotics. The median duration of symptoms is 3 days, but symptoms can last for as little as 90 minutes and as long as 6 days.3

Despite the development of delayed hypersensitivity in a child, there are no contraindications to future penicillin use. In one prospective study,4 for example, only 6.8% of 88 children with a documented maculopapular rash secondary to β-lactam use had a recurrent rash with subsequent use. If the rash does recur with amoxicillin use, the patient should discontinue the medication and be referred for allergy testing.5 Amoxicillin should be avoided in the future if the rash has an immediate onset (within a few hours after administration); has a severe, exfoliative quality like that of Stevens-Johnson syndrome or toxic epidermal necrolysis; or is associated with fever.

In our case, we discontinued the amoxicillin and did not start another antibiotic, since the results of her ear examination were reassuringly normal. Had the ear infection still been present, we would have considered an alternative antibiotic, such as a second- or third-generation cephalosporin or an aminoglycoside. A recent meta-analysis6 has shown that, in patients with true IgE allergy to amoxicillin, the cross-sensitivity rate to first-generation cephalosporins is approximately 0.5%, and not the 10% that traditionally has been stated in classic textbooks and journals. The meta-analysis reported no cross-sensitivity to second- or third-generation cephalosporins.6

Kirk Barber, MD, FRCPC––Series Editor: Dr Barber is a consultant dermatologist at Alberta Children’s Hospital and clinical associate professor of medicine and community health sciences at the University of Calgary in Alberta.

4. Caubet J-C, Kaiser L, Lemaître B, Fellay B, Gervaix A, Eigenmann PA. The role of penicillin in benign skin rashes in childhood: a prospective study based on drug rechallenge. J Allergy Clin Immunol. 2011;127(1):218-222.