Disclosure: This publication was not financially supported by any institution.

Cough, stridor, and respiratory distress in the pediatric population may be a respiratory emergency and can be caused by a complex range of differential diagnoses, one of which is foreign body aspiration. This condition is commonly associated with a recent choking episode; however, physical examination signs may include coughing fits, increased work of breathing, stridor, and wheezing.1 Here we provide a case and brief review of pulmonary Mycobacterium avium complex (MAC) infection in immunocompetent children.

CASE: A 16-month-old healthy Caucasian girl was brought to our tertiary care hospital for evaluation of cough and stridor of 3 weeks’ duration. She had no significant history of choking, apnea, or cyanosis. She had been treated as an outpatient with prednisone, clarithromycin, albuterol, diphenhydramine, and cetirizine without improvement. The parents denied recent travel outside the United States, sick contacts, and exposure to a high-risk setting (such as a homeless shelter, nursing home, or prison).

Chest radiographs showed left hilar lymphadenopathy and signs of left lung air trapping, suggestive of an airway foreign body (Figure). Direct laryngobronchoscopy (DLB) on the day of presentation revealed a friable lobular mass on the proximal end of the left mainstem bronchus with its base on the medial wall and near 100% occlusion of the airway. The lesion was removed using optical forceps and sent for microscopic examination.

On postoperative day one, the patient experienced symptomatic and clinical improvement. A chest CT scan showed normal lungs and heart, with no residual lesion. Biopsy results revealed necrotizing granulomatous inflammation with rare structures, compatible with acid-fast microorganisms by Kinyoun acid-fast stain. On questioning the parents again, they admitted to recent travel to Tennessee and Florida and use of a public swimming pool. No treatment was initiated at this time.

The patient’s symptoms recurred. A follow-up DLB performed 4 weeks after the initial procedure identified a mass in the same location on the left mainstem bronchus. It was excised, and its base was treated with potassium titanyl phosphate laser.

The pathologic findings were identical to the original report. A portion of excised endobronchial mass was sent for tissue cultures, including anaerobic, fungal, and mycobacterial cultures with stain. A polymerase chain reaction assay for Mycobacterium tuberculosis was negative. Results of tuberculin skin test and QuantiFERON-TB Gold In-Tube test were also negative.

The endobronchial lesion recurred again 4 weeks after the second DLB. A third DLB with biopsy was performed and the lesion was excised. At 2-month follow-up, the patient was symptom-free, and a fourth and final DLB showed no regrowth of the mass. 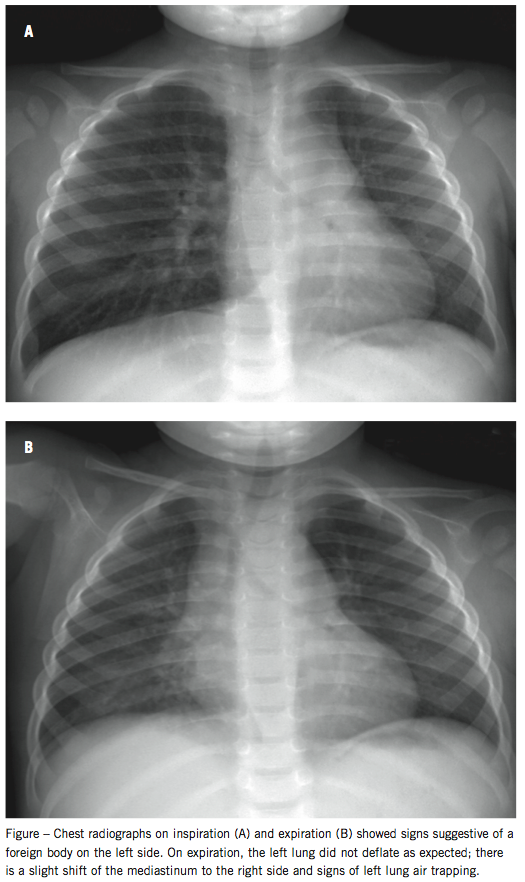 IMPORTANCE OF CULTURE FOR RESPIRATORY LESIONS

This toddler’s initial symptoms, age, and imaging studies were all suspicious for an airway foreign body. In addition, she had no known exposures or risk factors associated with M tuberculosis. The recurrence of an obstructive left bronchial necrotizing granulomatous mass with rare structures consistent with acid-fast micro-organisms led to consideration of tuberculosis and MAC infection. This case highlights the importance of obtaining culture, acid-fast smears, and histopathology when direct examination of a surgical specimen reveals granuloma formation.2,3

The differential diagnosis of airway foreign body in children is broadly classified into various causes, which include infection, allergic or inflammatory processes, and neurologic or congenital anomalies.1 The differential diagnosis of necrotizing granulomatous inflammation in the bronchi includes infections, such as atypical mycobacterial infection, tuberculosis, fungal infection, brucellosis, and melioidosis,2 as well as noninfectious causes, such as Wegener granulomatosis, hypersensitivity pneumonia, and sarcoidosis.

The most common mycobacterium agent of human infections after M tuberculosis is MAC.4 The incidence of MAC infection has increased dramatically in recent years; however, the true magnitude of this currently nonreportable disease is difficult to ascertain.4,5

Historically, nontuberculous mycobacteria (NTM), or atypical mycobacteria, were believed to be laboratory contaminants or airway colonizers and were not thought to cause disease in immunocompetent hosts. However, NTM have emerged as a cause of both pulmonary and extrapulmonary infections in patients with AIDS and in immunocompetent persons.6 Although most patients who present with NTM infection with pulmonary involvement have evidence of underlying chronic lung disease, malignancy, or immunosuppressant therapy, those with no known immunologic defect can also be affected.7,8

Pulmonary disease caused by MAC infection typically occurs in
children with chronic lung disease or cystic fibrosis and rarely develops in immunocompetent children. Lymphadenitis is by far the most common expression of infection with NTM described in the immunocompetent pediatric population.2,9

The pathologic changes characteristic of atypical mycobacterial infections is similar to that of ordinary tuberculosis. Necrotizing granulomatous inflammation is the most common reaction pattern. The clinical spectrum of disease varies from isolated endobronchial masses (as in this case) to more aggressive involvement, such as parenchymal infiltrates, cavities, pleural involvement, mediastinal lymphadenopathy, and mastoiditis.2,4,9-11

DIAGNOSIS AND TREATMENT OF MAC INFECTION

Specific criteria for the diagnosis of infection with NTM, including MAC, have been suggested and include clinical symptoms or suggestive imaging with exclusion of other diagnoses. Diagnosis also requires at least 1 of the following:

•One bronchial wash/lavage or biopsy with mycobacterial histopathologic features.

•Positive culture from tissue sampled for NTM, including MAC.12

Treatment of MAC infection includes clarithromycin or azithromycin, ethambutol, and rifampin. Duration of therapy is poorly defined and varies based on the site of infection, host factors, and severity of infection.12 Presumed immunocompetent patients with confirmed infection with MAC should undergo an HIV test, at minimum, and a more advanced work-up should be considered.

In this case, results of a basic immune system evaluation, including HIV antibody screen, immunoglobulin levels, complete blood cell count with differential, T and B cell subsets, and basic renal and liver function panels, were normal. Interferon-g pathway testing and oxidative burst assay were suggested but refused by the mother.

Necrotizing granulomatous endobronchial lesions from NTM, especially MAC, should be part of the vast differential diagnosis for the apparent immunocompetent toddler who has cough and stridor and in whom imaging suggests an airway foreign body.