A 27-year-old woman presented to a clinic in South Florida with a rash that had been causing mild discomfort on her left thigh and had been progressively enlarging. The patient denied having fever, cough, joint pain, or malaise, and she denied taking any medications. She was otherwise healthy. She had been on a camping trip in Central Florida a few weeks before the rash had appeared.

Physical examination. The patient’s vital signs were as follows: blood pressure, 120/70 mm Hg; pulse, 80 beats/min; respiratory rate, 16 breaths/min; and temperature, 37°C. Her abdomen was soft, nontender, and nondistended, and normal bowl sounds were present. Neurologic examination findings were nonfocal; the patient was awake, alert, in no acute distress, and oriented to person, place, and time.

Dermatologic examination showed an expanding annular plaque with a partially clearing center on the left anterolateral proximal thigh. The rash was approximately 3 cm in diameter and was nontender, oval, and slightly raised, with an erythematous appearance (Figure 1). 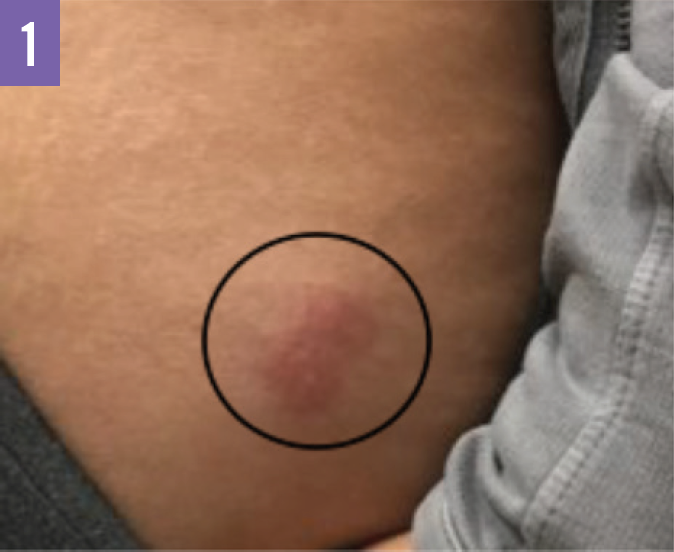 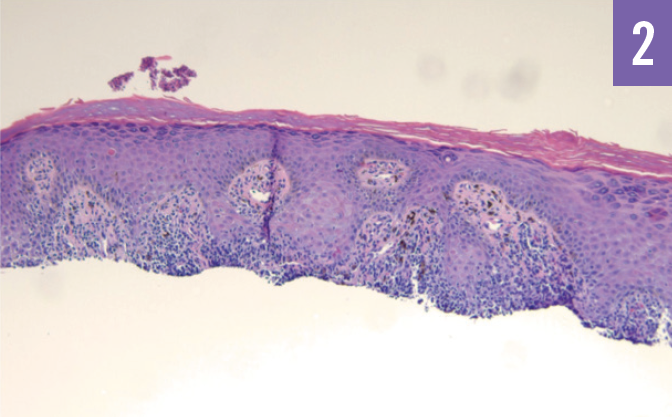 Based on her presentation and laboratory test results, the patient received a diagnosis of Lyme disease.

Discussion. Lyme disease results from infection with the spirochete bacteria B burgdorferi, which in North America is transmitted to humans via the bite of an infected blacklegged tick (or deer tick, Ixodes scapularis). Because of its size and shape,
B burgdorferi can infect many organ systems and cross the blood-brain barrier, and thus infection with it is potentially fatal.1 The disease takes its name from the Connecticut towns of Lyme and Old Lyme, where in 1975 the disease was first recognized as a separate entity.2

It has been estimated that as many as 329,000 new cases of Lyme disease occur annually in the United States,3 with approximately 96% of cases reported in 14 states in the Northeast and the Upper Midwest.4 In Florida, an average of 67 cases per year were reported from 2002 through 2011; however, only 23% of these cases were acquired in the state, and the majority of infections acquired in Florida were reported in the northern and central regions of the state.5 It is rather rare to find a Lyme disease case in South Florida.

While erythema migrans is a very clear indication of the presence of Lyme disease, confirmation of chronic infection (disseminated disease) requires specific blood testing, as per guidelines from the Centers for Disease Control and Prevention.7,8 Lyme disease can be positively confirmed by testing for specific classes of IgM and IgG antibodies by Western blot testing.9 In our patient’s case, test results were positive for antibodies to IgM p41 and IgM p23, two of the highly specific markers of infection with B burgdorferi.

Treatment of Lyme disease depends on the clinical manifestations. At the early stages, oral antibiotics such as doxycycline (the preferred agent, because it is also effective against other tickborne illnesses), amoxicillin, cefuroxime, and azithromycin are prescribed. After completing a course of oral antibiotics, patients usually recover quickly and completely. In chronic cases, where symptoms of neurologic and cardiac diseases have developed, intravenous regimens of antibiotics are used.10

Prevention of Lyme disease should be a top priority for people living in endemic areas; this includes avoiding wooded or grassy areas with a large deer population, wearing protective clothing, and using tick repellants such as diethyltoluamide (DEET) and permethrin.

Outcome of the case. The patient was treated with antibiotics, after which her rash and other symptoms of Lyme disease resolved.