Lumps and Bumps in Children: Cysts

Dr Leung is clinical professor of pediatrics at the University of Calgary and a pediatric consultant at the Alberta Children’s Hospital in Calgary. 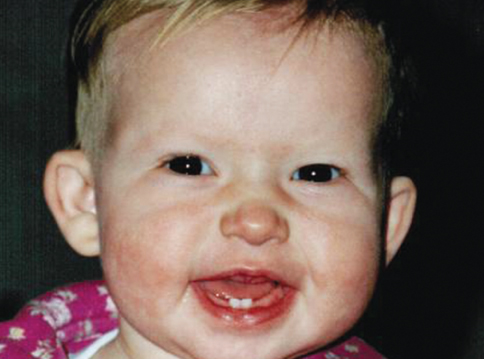 A 3-month-old girl was noted to have a cystic mass at the lateral angle of the orbit in the weeks after birth. She had been born via normal vaginal delivery after an uncomplicated pregnancy. There was no history of trauma.

A dermoid cyst is located at the outer end of the eyebrow or at the lateral angle of the orbit. External angular dermoid cysts are the most frequently encountered periorbital tumors in childhood.1,2 Dermoid cysts that involve the lateral eyebrow or eyelid account for more than 50% of these lesions in the head and neck.1 The cyst may cause a bony depression from pressure or may have a dumb-bell extension into the orbit. Histologically, the cyst is lined by epidermis with skin appendages. The central cavity contains keratin debris, hair, and sebum.

Rupture of the dermoid cyst into the subcutaneous tissue can create severe granulomatous inflammation. To prevent this possibility, and for cosmetic reasons, external angular dermoid cysts are usually excised. Traditional approaches involve an incision directly over the lesion, above, below, or through the eyebrow. To avoid the visible scar associated with eyebrow incision, an alternative approach is to enter through an upper eyelid crease.1 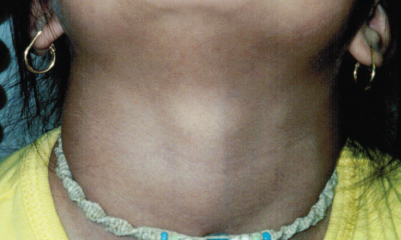 This 13-year-old girl first noticed a painless lump in her neck about a year earlier. Physical examination showed a smooth, nontender mass in the midline of the anterior neck, at the level of the hyoid bone. The mass moved with swallowing and on protrusion of the tongue. The thyroid gland was in the normal position.

Typically, a thyroglossal duct cyst presents as a painless midline neck mass that may move with swallowing and move upward with protrusion of the tongue.3 The mass is slightly mobile on palpation. However, its movement may be limited with protrusion of the tongue because of its persistent attachment to the foramen cecum.3 About 1% of the cysts are located laterally, often on the left side.4

A thyroglossal duct cyst can occur at any site along the normal pathway of descent from the foramen cecum to the lower neck region.3 The most common site is between the thyroid gland and the hyoid bone (61% of cases).5 Other potential locations include suprahyoidal (24%), suprasternal (13%), and intralingual (2%).4 Although thyroglossal duct cysts are congenital, these lesions rarely present in the neonatal period. More commonly, the cysts are noted in preschool children, sometimes after an upper respiratory tract infection.3 Up to 50% of the lesions are not diagnosed until the second decade of life.5 Some do not present until adulthood.1

Infection is the most common complication.1 Extrinsic airway compression and intralaryngeal extension, with resultant dyspnea or hoarseness, rarely occur.4 A lingual thyroglossal duct cyst might result in dysphagia, speech impairment, and ball-valve obstruction of the larynx.4 Malignant transformation during childhood is possible but rare.1 About 75% to 85% of thyroglossal duct malignancies are papillary adenocarcinomas.1,3

The Sistrunk procedure is the surgical treatment of choice.2 It involves excision of the cyst, thyroglossal tract, and central portion of the hyoid bone to prevent recurrence. 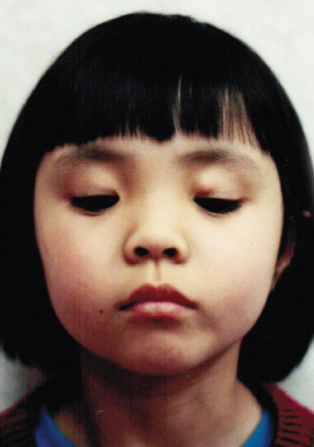 The 2 masses one on each upper eyelid of a 9-year-old girl had been present for a year. They were asymptomatic. The child’s vision was normal.

The lesions are meibomian cysts or chalazia. A meibomian cyst is a localized lipogranulomatous inflammation that results from blockage of the meibomian gland by desquamated epithelial cells and/or lipid inspissation.1,2 It is the most common inflammatory lesion of the eyelid.1

Clinically, a meibomian cyst manifests as a firm, nontender nodule in the upper or lower eyelid. The condition is more common in the upper eyelid, where an increased number and length of meibomian glands are present.2 The cyst may occur externally as a lump on the skin, as in this patient, or internally as a lump beneath the conjunctiva. It is usually painless and nonerythematous but may be cosmetically unsightly and can become secondarily infected.

Meibomian cysts may be associated with meibomian gland dysfunction or chronic blepharitis.3 Rarely, an infected lesion may lead to preseptal cellulitis.4 If the lesion is large enough, it may cause visual problems, such as astigmatism by exerting pressure on the eyeball.5

About 80% of meibomian cysts resolve with conservative treatment, which consists of eyelid hygiene, twice daily warm compresses, and gentle lid massage.3,6 The massage is performed over the lesion, in the direction of the eyelashes.6 A topical antibiotic is used when the lesion is infected.