Lumbar Diskitis in a 20-Month-Old Boy

A 20-month-old boy presented with difficulty walking and an abnormal gait secondary to reported back pain. The pain had gradually worsened over the previous 2 months and was relieved temporarily with naloxone and bed rest.

The symptoms had started with 4 days of fever up to 40°C, but with no other reported complaints at the time. The boy started to develop lower back pain and an unsteady gait; the results of a subsequent bone scan were normal. The child’s mother denied upper respiratory symptoms, urinary symptoms, or any history of trauma to the site. 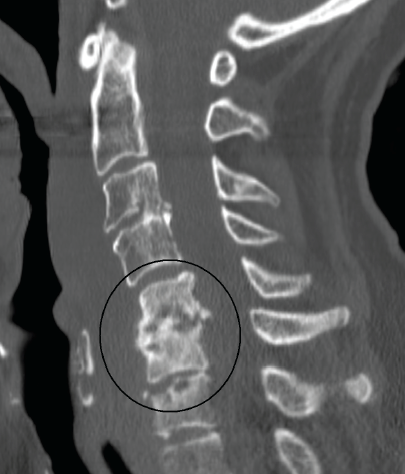 Typical computed tomography scan of an infected vertebral disk (not a scan of the patient in this case; image courtesy of James Heilman, MD).

Physical examination revealed an afebrile child who appeared uncomfortable but not toxic-appearing. Vital signs were normal. No erythema, edema, or tenderness was noted on his back or extremities. The patient was unable to sit up, and he had an unsteady gait.

Diskitis, also known as pyogenic infectious spondylitis, is an inflammation or infection of the intervertebral disks and vertebral end plates.1 It may result from bacterial infection or from trauma of the intervertebral disk. The most common isolated organism is Staphylococcus aureus. Other causative pathogens include Staphylococcus epidermidis, Kingella kingae, anaerobes, Streptococcus pneumoniae, and Gram-negative enteric organisms.1,2

Although the incidence of diskitis is unknown, reported cases have occurred primarily in children between the ages of 1 and 7 years at a rate of 1 to 2 cases per year.1,2 It is seen almost twice as often in boys as in girls.

Diskitis often is associated with a history of trauma or recent upper respiratory or urinary tract infection, and it most commonly involves the lumbar or lower thoracic spine.1 Children with diskitis often present with back pain and associated acute hip pain, joint stiffness, non-weight-bearing gait, abdominal pain, and constitutional symptoms such as low-grade fever, poor appetite, irritability, and fatigue.

Diskitis is typically a clinical diagnosis and should be confirmed with diagnostic imaging (ie, plain radiography, computed tomography, magnetic resonance imaging of the spine, bone scan).

In addition, cultures of blood and the affected disk should be obtained but likely will be found to be sterile.1 An increased ESR is expected. Imaging results initially might be normal, but within 2 to 3 weeks of symptom onset, they might reveal narrowing of the disk space with irregularity and demineralization of the margins of vertebral end plates.2

Management of diskitis involves pain control and immobilization. Antimicrobial therapy is considered only if blood or disk aspirate cultures demonstrate an infectious etiology. A biopsy or disk aspiration should be reserved for complicated and refractory cases of diskitis.1,2

Complications and recurrences are rare, and patients recover well in most cases.