A previously healthy 66-year-old woman presented with a weeklong history of febrile illness accompanied by headache, malaise, nausea, and vomiting.

At the time of admission, her vital signs were within normal limits. Physical examination findings were unremarkable with the exception of diffuse rhonchi and focal rales in the left lower lobe. On neurologic examination, cranial nerves II through XII were grossly intact. There were no motor/sensory deficits or abnormal cerebellar findings. Deep tendon reflexes were +2 bilaterally, and meningeal signs of inflammation were absent on admission, including negative Kernig and Brudzinski signs.

Diagnostic tests. A computed tomography scan revealed pneumonia, which was treated with empiric levofloxacin and vancomycin. On hospital day 4, results of blood cultures taken on the day of admission returned positive in 2 of 4 bottles for Listeria monocytogenes. Penicillin is the gold standard treatment for listerial infections, but because of the patient’s history of severe penicillin allergy causing tongue swelling, she was treated instead with meropenem. 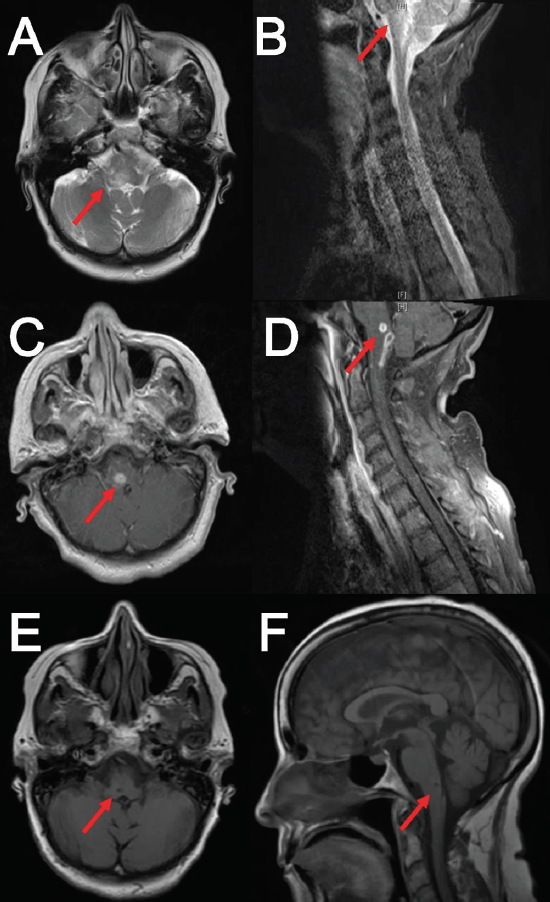 On day 6 of admission, she began to develop signs of truncal ataxia, listing to the right during a Romberg test, along with right unilateral nonaccommodating mydriasis, dysphagia, hallucinations, and increasing delirium. Magnetic resonance imaging (MRI) without contrast showed a T1 hypointense and T2 hyperintense signal in the right brainstem at the level of the medulla and at the right middle cerebellar peduncle (Figure A). MRI with contrast showed multifocal abnormal enhancement in the right posterior lateral medulla oblongata and upper portion of the spinal cord (Figure B).

Because of her history of severe penicillin allergy, the patient was desensitized to ampicillin to complete a 6-week course. A 14-day course of gentamicin was added for its synergistic effect in penetrating the central nervous system (CNS).

Continued delirium and decreased consciousness level on day 13 led to respiratory compromise requiring intubation and prompted an MRI with contrast, the results of which showed bi-lobed ring-enhancing lesions involving the right posterolateral medulla oblongata and upper cervical cord measuring approximately 31 × 8 × 8 mm and extending inferiorly to the level of the C1-2 intervertebral disk (Figures C and D). These findings were consistent with a small abscess.

Outcome of the case. By day 19, the patient had regained sufficient consciousness and lucidity to communicate by writing, and by day 24 she was successfully extubated and was able to participate in physical and occupational therapy. She was discharged after finishing 42 days of ampicillin, with complete resolution of all neurologic symptoms.

Our patient’s case appeared to follow the typical biphasic course of listerial rhombencephalitis. Similarly to our patient’s presentation, as many as 42% of patients who develop rhombencephalitis had no meningeal signs on admission as opposed to patients with other causes of acute bacterial meningitis.3 The specific involvement of cranial nerve III that manifested as anisocoria in our patient is present in 20% of cases.1

Intravenous antibiotic treatment should be started without delay as soon as the diagnosis has been made, because outcomes significantly improve with early treatment.4 With listerial infection with localized CNS involvement, ampicillin or penicillin should be continued for 5 to 6 weeks with gentamicin added for 5 to 7 days.

Because of our patient’s allergy to penicillin, we changed her empiric antibiotic to meropenem, which showed susceptibility in vitro. However, in the only other case report to our knowledge where meropenem was selected, the treatment failed in vivo.5 We desensitized our patient to penicillin when we discovered the severity of her disease with CNS involvement, given the paucity of clinical studies of using carbapenems for severe infections. Our patient did have some neurologic deterioration while on meropenem, and it remains unclear whether this was part of the natural biphasic course of disease or was suggestive of inadequate treatment; therefore, we recommend considering desensitizing patients with listerial rhombencephalitis in the setting of a penicillin allergy. Even with early and adequate treatment, the patient will likely require intensive inpatient rehabilitation and may have residual deficits.6