A 44-year-old man presented with an asymptomatic mass on the left upper back. The mass had been first noted 4 to 5 years ago and had very slowly increased in size over time. The patient was a professional basketball player and was in good health. There was no history of trauma. The family history was unremarkable. Review of systems was unremarkable; there was no functional impairment.

Physical examination revealed a solitary, soft, well-circumscribed, dome-shaped, lobulated mass measuring 7 cm in diameter on the left upper back. The overlying skin appeared to be normal. The mass was nontender. It was mobile, not attached to the skin or underlying structures. A slipping sign, elicited by gently sliding the fingers off the edge of the mass, was positive. The rest of the examination findings were normal. There was no other cutaneous or systemic abnormality.

Based on the clinical appearance, a diagnosis of lipoma was made. The mass was excised with an elliptical incision. Histologically, the lesion was composed of multilobulated, mature adipocytes with strands of connective tissue enclosed within a capsule. The patient’s postoperative course was uneventful. 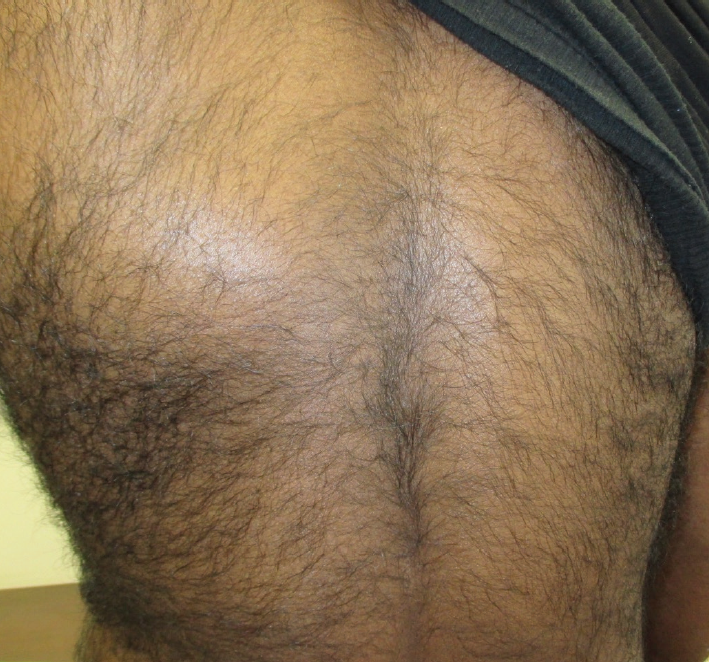 Discussion. A lipoma is a benign tumor composed of collections of mature normal adipocytes arranged in lobules and enclosed by a well-defined, thin fibrous capsule.1,2 It is by far the most common mesenchymal neoplasm.1 Although lipomas have been reported in all organs, including the kidneys, liver, and lungs, they occur most frequently in the subcutaneous tissue.1-4 This discussion focuses on subcutaneous lipomas.

Etiopathogenesis. The exact etiopathogenesis is not known. Trauma is implicated at least in some cases.5 Rupture of the fibrous septa after trauma accompanied by tears of the anchorage may result in proliferation of adipose tissue.10 Also, trauma may induce cytokine release that may trigger adipocyte differentiation and maturation. There is a genetic predisposition; clonal chromosomal aberrations are common in patients with lipomas.11

Clinical manifestations. A lipoma presents as a slow-growing, soft, well-circumscribed, lobulated, round or oval, dome-shaped or egg-shaped mass that is not attached to the overlying skin or underlying structures. The overlying skin is characteristically normal. A positive slipping sign is characteristic; the tumor will be felt to slip out from under. The size usually ranges from 2 to 5 cm in diameter and rarely greater than 10 cm in diameter.12 Sites of predilection include the back, shoulders, proximal portions of extremities, abdomen, buttocks, and posterior neck.1,7 Most lipomas are asymptomatic and solitary.1-3 The condition is multiple in approximately 5% of cases.6

Diagnosis. The diagnosis is mainly clinical. No imaging studies are usually required. Plain radiographs typically demonstrate lucency in the soft tissue consistent with fat. Imaging studies using ultrasonography, computed tomography, or magnetic resonance imaging may be considered if the lipoma is large, has atypical features, or appears in deeper structures. A referral to a dermatologist and/or skin biopsy for histology should be considered if the diagnosis is in doubt. The differential diagnosis includes liposarcoma, angiolipoma, epidermoid cyst, dermatofibroma, hematoma, abscess, keloid, panniculitis, neurofibroma, ganglion, rheumatoid nodule, and metastasis.6

Complications and prognosis. A lipoma may be cosmetically unsightly. Other complications include ulceration, fatty necrosis, infection, gangrene, calcifications, xanthomatous change, and compression of a peripheral nerve or adjacent structures.1,12 Lipomas in other locations may cause pain, breathing difficulties, cardiac arrhythmia, dysphagia, or intestinal obstruction. A lipoma in the lumbosacral area may be a cutaneous marker of occult lumbosacral dysraphism.15,16 Liposarcomas usually arise de novo, not from an existing lipoma.14

The prognosis is good; malignant transformation is rare.14 Recurrence is uncommon unless excision is incomplete.

Management. Most small and asymptomatic lipomas require no treatment. Treatment may be considered for cosmetic reasons; for symptomatic, large, or rapidly growing lesions; and for atypical lesions where a histologic diagnosis is needed.1,3 When treatment is desired, complete surgical excision together with the fibrous capsule is the treatment of choice to prevent recurrence.1,3,7 Surgical excision allows histologic examination of tissue to exclude malignancy. Other treatment options include liposuction, suction-assisted lipectomy, and, less preferably for small lesions, intralesional injections with corticosteroids, deoxycholate, or phosphatidylcholine.3,12,17