Linear Rash on the Arm of a 7-Month-Old Girl

Ms Marquez-Conklin is a student in the physician assistant program in the Department of Family and Community Medicine at the University of New Mexico in Albuquerque. Dr Onyeama is a pediatrician at Cibola General Hospital in Grants, New Mexico.

Kirk Barber, MD, FRCPC––Series Editor:Dr Barber is a consultant dermatologist at Alberta Children’s Hospital and clinical asso-ciate professor of medicine and community health sciences at the University of Calgary in Alberta.

A 7-month-old girl presented with a 2-month history of rash. The rash, which had first appeared as small, papular lesions on the left antecubital region, had spread in a linear fashion distally to the wrist and proximally to the axillary region. No vesicles were present. The rash did not appear to bother the infant, and the parents reported no history of apparent itchiness. The girl had no history of injury, contact with an irritant, exposure to persons with chickenpox or shingles, or exposure to insects. 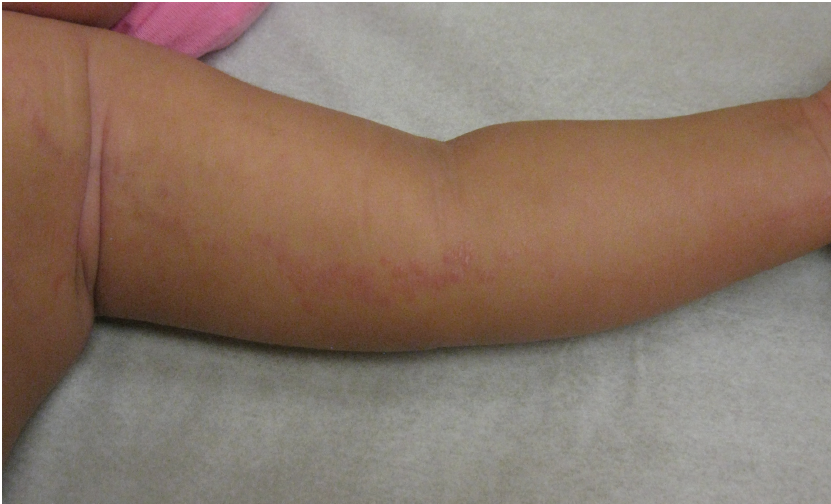 Physical examination revealed red papules measuring approximately 1 to 3 mm in diameter, with a linear distribution along the lines of Blaschko. The rash appeared as a thin band extending from the left axillary region to the left wrist. No nail involvement or vesicles were noted. The rest of the physical examination findings were normal.

Based on the clinical presentation of this rash, what is this infant’s diagnosis?

Lichen striatus is a relatively rare, benign, and self-limiting dermatosis.1 It most commonly is seen in children between the ages of 6 months and 15 years, with the lesions occurring more commonly in girls than in boys.1 The condition has no significant seasonal variation.1,2 The etiology is unknown, but studies have shown it to be a T-cell–mediated inflammatory skin disease.2

Lichen striatus is characterized by sudden onset of unilateral linear papules distributed along the lines of Blaschko, usually on the extremities.3 The lesions can progress over the course of days or weeks, and then slowly decrease over a period of 6 to 24 months.3

Treatment of lichen striatus may be limited to active monitoring of the lesion. On average, resolution occurs within 6 months without any medical intervention.1 If nail involvement is present, resolution can take much longer.

Topical corticosteroids do not appear to shorten the duration of the condition but may help with pruritus if it is present.1 One recent study has shown that tacrolimus ointment is effective for persistent forms of lichen striatus, with patients showing regression of lesions after 3 weeks of therapy.2

Long-lasting hypopigmentation is common after resolution of lesions, and relapses or recurrent episodes of lichen striatus may occur.3