A 34-year-old male presented with itchy lesions on the ankles, wrists, and dorsa of hands. Lesions on the ankles appeared 2 years ago, while those on the wrists and dorsa of hands were of 6-month duration. His past health was unremarkable. There was no history of trauma, blood transfusion, or drug abuse. There was no family history of skin problems.

This patient had lichen planus. He was treated with topical betamethasone dipropionate cream twice a day with significant improvement of the lesions in 2 months.

The term “lichen planus” was derived from the Greek word leichen meaning “tree moss” and the Latin word planus meaning “flat.” Lichen planus is an inflammatory dermatosis of unknown origin that typically affects the skin, mucous membranes, and nails. One or several areas can be involved, either concomitantly or sequentially.1 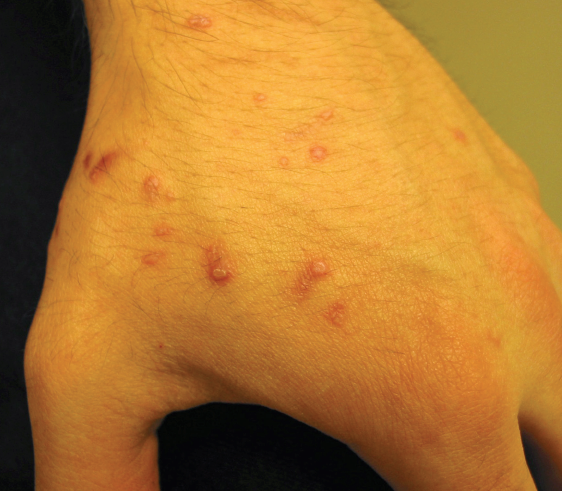 Figure. Lichen planus with flat-topped, polygonal, violaceous papules on the dorsum
of the left hand.

Epidemiology and pathogenesis. The prevalence of lichen planus has been estimated to be 1% in the United States.2 Both sexes are equally affected.2,3 Most cases occur in individuals between 30 and 60 years of age.4

Although the exact etiology is not known, an immune-mediated pathogenesis has been recognized. The apoptosis in basal keratinocytes seen in lichen planus is attributed to activated cytotoxic CD8+ T lymphocytes recruited to the dermal-epidermal junction.1,2 The overrepresentation of certain HLA haplotypes (e.g. HLA-A3, HLA-A5, HLA-B8, HLA-Bw35, and HLA-DR1) suggests that genetic factors may be operative.1,5 There is an association between lichen planus and hepatitis C virus.6

Clinical manifestations. Cutaneous lichen planus is the most common presentation characterized by 6 Ps: planar (flat-topped), purple (violaceous), polygonal, pruritic, papules/plaques that affect the skin.4 Lesions of lichen planus are often superimposed by lacy, reticular, white lines known as “Wickham striae.”2,4 Sites of predilection include the flexor aspects of the wrists and ankles, dorsa of hands, trunk, shins, and glans penis.2,7 The distribution is often symmetric. Similar to psoriasis, the Koebner phenomenon is particularly characteristic.4

There are 3 main forms of oral lichen planus—reticular, erosive, and atrophic.4 The reticular form is most common and typically presents as bilateral, asymptomatic papules or plaques with interlacing Wickham striae on the oral mucosa.8 The erosive form presents as ulceration, erythema, and keratotic areas. Erosive lesions can be quite painful. The atrophic form presents as a red, diffuse lesion with mucosal atrophy.

Nail lichen planus is characterized by nail thinning with longitudinal ridging and fissuring. Involvement of the nail matrix may lead to onychorrhexis, trachyonychia, and in severe cases, pterygium and anonychia.7

Complications. In cutaneous lichen planus, postinflammatory hyperpigmentation is common, especially in children and in individuals with darker skin, and can last for a very long time.1,4,9 The lesions may be cosmetically unsightly and socially embarrassing if they occur in an exposed area. The erosive form of oral lichen planus can be quite painful and may interfere with speech, chewing, and swallowing and even result in weight loss.8 The unsightly appearance, pruritus, and pain may have an adverse effect on the quality of life.

Prognosis. The majority of cases resolve within 2 years.4 Approximately 15% to 20% of cases run a chronic course characterized by remissions and relapses.10

Management. Although cutaneous lichen planus tends to resolve with time, appropriate treatment may shorten the duration of the disease and reduce the itchiness. Medium to high potency corticosteroids are the treatment of choice in most patients.2 Oral antihistamines may be used to relieve the itchiness. Intralesional corticosteroids may be used for hypertrophic lesions.2 When the above measures fail, oral corticosteroids should be considered.1 Other therapeutic options include oral retinoids and topical psoralen and ultraviolet A (PUVA) photochemotherapy or narrowband UVB phototherapy.1,2,7

Alexander K. Leung, MD, is a clinical professor of pediatrics at the University of Calgary and pediatric consultant at the Alberta Children’s Hospital in Calgary, Alberta, Canada.

Benjamin Barankin, MD, is the medical director and founder of the Toronto Dermatology Centre in Toronto, Ontario, Canada.