An 8-year-old boy was referred for an evaluation of numerous pigmented macules of the skin. The patient and his family had recently immigrated to the United States. According to the patient’s parents, the cutaneous pigmented lesions first became evident at approximately 1 year of age and have since progressively increased in number. Further history provided by the parents indicated the patient has always been small for his age. The patient has 3 older full siblings, all in good health with normal growth and without significant cutaneous findings. The parents of the patient are of normal stature and in good health.

Dermatologic examination revealed hundreds of 1- to 5-mm dark brown macules located on the face, neck, axillae, back, chest, and arms (Figures 1 and 2). In addition, an epidermal nevus  measuring 1.0 × 1.8 cm in size was identified on the patient’s right posterior neck, and a café au lait patch that measured 3.0 × 2.0 cm in size was noted on his medial left thigh. Besides the dermatologic findings, physical examination revealed that the patient was short for his age with low-set ears, hypertelorism, pectus excavatum, and irregularly spaced teeth with abnormal angles and tooth decay. A biopsy of one of the characteristic macules from the neck was performed.

Based on his clinical features of hundreds of dark macules of the skin, his short stature, and hypertelorism, the diagnosis of LEOPARD syndrome was made. Punch biopsy was performed to confirm the diagnosis of lentigines (Figure 3). Histologic analysis revealed increased melanin pigment and melanocytes within the basal cell layer consistent with lentigo simplex. Pigment incontinence was identified within the superficial dermis. 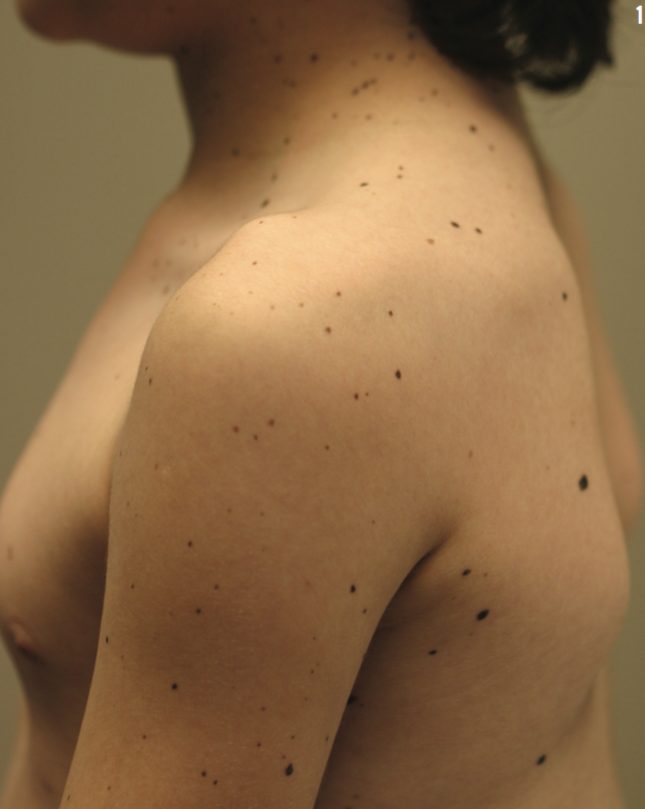 The features of LEOPARD syndrome were first described in 1936 and the acronym coined in 1969 by Gorlin et al.1,2 It is an autosomal dominant syndrome with high penetrance and variable phenotypes.3 The initial manifestations are frequently cutaneous with the presence of multiple lentigines, but its clinical features extend beyond cutaneous, and its diagnosis is imperative due to the potential for associated cardiac abnormalities.2-5 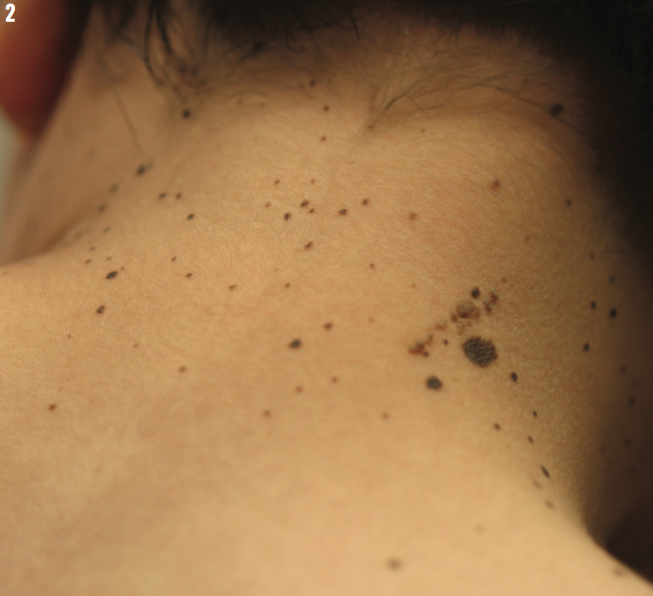 Molecular testing may assist in providing a diagnosis. Its inheritance is autosomal dominant or a sporadic mutation that most frequently is a missense mutation in PTPN11.2,3 In the small percentage of cases that are negative for PTPN11 mutation, RAF1 mutations have been identified.5

Typically, the lentigines in LEOPARD syndrome are first identified approximately at the age of 4 or 5 years and increase in number until puberty. At that time, the lentigines could number in the thousands. Although lentigines are frequently diffuse, they are usually concentrated on the upper half of the body excluding mucosae.3

Other dermatologic findings that are encountered in LEOPARD syndrome include café au lait spots, café noir spots, and epidermal nevi.3 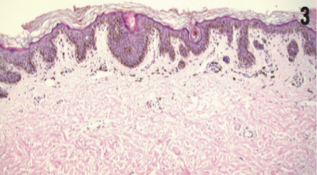 10× hematoxylin and eosin staining of a punch biopsy showing in- creased melanin and melanocytes.

The most concerning anomaly is cardiac involvement, which most frequently presents as ECG conduction abnormalities, hypertrophic cardiomyopathy, or pulmonary stenosis.3,6 A review of LEOPARD syndrome identified ECG irregularities in 75% of cases, with ventricular hypertrophy being cited as the most common abnormality.6

Pulmonary stenosis has been the classic structural defect associated with LEOPARD syndrome. However, recent reviews suggest the incidence of pulmonary stenosis is approximately 10% to 20%, which is lower than the 40% initially documented.3 It is now believed that hypertrophic cardiomyopathy is more common.3,6 This type of cardiomyopathy most frequently involves the left ventricle and is alarmingly asymptomatic.

The onset of the hypertrophic cardiomyopathy is thought to occur before the appearance of lentigines and can progress as lentigines develop. Not all cases of hypertrophic cardiomyopathy lead to outflow obstruction in LEOPARD syndrome patients. Due to the high incidence of cardiac involvement, complete cardiac evaluation is warranted, including ECG and echocardiography.3,6

Hypertelorism is identified in the vast majority of individuals with LEOPARD syndrome. The most common genital abnormality documented is bilateral cryptorchidism, which is thought to occur in approximately 50% of males.3 In addition, hypospadias and genital hypoplasia are seen.3 A majority of patients with LEOPARD syndrome have height below the 25th percentile.3,4 The occurrence of sensorineural deafness is reported to be around 15% to 25%.

In addition to the cardinal features, other findings that can be associated with LEOPARD syndrome include pectus carinatum or excavatum, low-set ears, ptosis, abnormal dentition, and learning disabilities.3 Additional but less frequent cardiac abnormalities include mitral valve prolapse and septal defects.

NF type 1 should also be considered in the differential diagnosis. It is due to a mutation in the NF1 gene with café au lait macules as the earliest clinical feature.10 These macules often increase in size and number throughout childhood. Axillary freckling and neurofibromas appear in older children and adolescents.10

This patient met the criteria for LEOPARD syndrome because he exhibited multiple lentigines, ocular hypertelorism, and growth retardation. Other findings included mild proptosis, a wide triangularly shaped face, a long smooth philtrum, and a thin upper lip. The nasal bridge and tip were broad. Both ears were low-set and large with upturned earlobes. He also demonstrated superior pectus carinatum with inferior pectus excavatum. In addition to the lentigines, the patient presented with a café au lait patch and epidermal nevus that are commonly identified in LEOPARD syndrome.

Due to the frequent association of LEOPARD syndrome with cardiac anomalies, a pediatric cardiology consultation was requested. The patient’s ECG and echocardiogram were read as normal. The patient was referred to a pediatric geneticist who confirmed the diagnosis of LEOPARD syndrome. The boy’s height was 119.4 cm, and his weight was 20.8 kg, placing him in less than the fifth percentile in these categories compared with other boys his age.

We requested the patient to follow up annually with a dermatologist to assist with adherence regarding his yearly cardiac evaluations as well as auditory and clinical examinations. The patient’s family was also advised to consult genetic counseling to discuss the possibility of transmission of LEOPARD syndrome to the patient’s offspring due to its Mendelian inheritance.

This patient presented with many of the classic clinical findings associated with LEOPARD syndrome. The diagnosis of LEOPARD syndrome requires genetic counseling for the patient and family. In addition to an ongoing cardiac evaluation, a complete clinical examination with emphasis on the genitourinary tract and skeletal evaluations should be performed. An age-appropriate hearing assessment is also warranted.

Leigh Sutton, MD, is a PGY-2 in dermatology at Scott and White Clinic in Temple, Texas.

Elizabeth Sutton, BA, is a medical student at the University of Nebraska Medical Center in Omaha.

Margaret Sutton, MD, is a board-certified dermatologist in private practice in Lincoln, Nebraska.