A newborn girl was born to a 24-year-old African mother whose prenatal course was significant for elevated maternal blood lead levels that reached a maximum of 43 μg/ dL, with follow-up levels shown in Figure. The length of the gestation period was 39 weeks.

After identification of the elevated lead levels, the mother’s family and whole environment were investigated, and the source of lead was found to be a teapot that was used to boil water for tea. The blood lead levels of other family members (husband and 2 daughters) were evaluated and found to be within reference ranges.

The neonate was admitted to the regular newborn nursery and had unremarkable physical examination results, along with a blood lead level of 10 μg/dL measured at birth. The infant is being followed for growth and development. 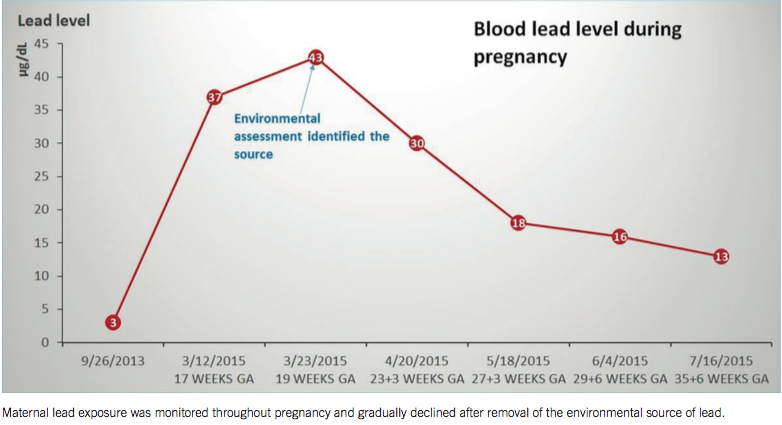 Lead readily crosses the placenta by passive diffusion and has been measured in the fetal brain as early as the end of the first trimester, so primary prevention of exposure is par- ticularly important to reduce risk. Hu and colleagues 4 studied the fetal lead exposure at each stage of pregnancy as a predictor of mental development, and they found that first- trimester measures of fetal lead exposure were predictive of adverse neurodevelopment later in life, with an effect that was independent from that of postnatal lead exposure and that was stronger than the effects associated with second- or third-trimester measures.

A strong inverse association has been found between mater- nal blood lead levels in the first trimester and neonatal behavioral neurologic assessment scores. Researchers have demon- strated that a fetal lead exposure as low as 5 μg/dL has an ad- verse effect on neurodevelopment. This effect is best assessed by measuring the umbilical cord blood lead level and the blood lead level at 24 months of age.5,6 Prenatal and postnatal blood lead levels below 10 μg/dL can also alter adrenocortical response to acute stress, as they are independently associated with significantly heightened salivary cortisol responses. 1

In New York City, foreign-born pregnant women with lead poisoning have tended to be relatively recent immigrants, with a median length of residence in the United States of 6 years. In 2012, among 107 pregnant women newly identified with a blood lead level of 10 μg/dL or greater, 93% were foreign born, with 45% born in Mexico, 13% in Bangladesh, 6% in India, and 5% in Pakistan.7 Identifying cultural sources of lead poisoning requires meticulous investigation of the home as well as knowledge of cultural practices, language-appropri- ate materials, and translators. Application of good, basic epidemiologic practice is also essential.

In the early 1990s, the New York City Department of Health initiated prenatal lead level screening for early identification, evaluation, and prevention of maternal, fetal, and neonatal lead toxicity. This case is an example where the policy of prenatal screening of lead resulted in efforts to stop maternal lead exposure. These measures potentially resulted in decreased lead levels in the fetus and, later, newborn.

Elevated lead levels have become a national issue because of the Flint water crisis in Michigan that was caused by the release of lead from aging pipes into the water supply due to the corrosive effect of Flint River water. The contamination of the water resulted in extremely elevated levels of lead in thousands of Flint children exposed to the toxic water. However, in the case of our patient, water from pipes was not the source

of contamination but rather a teapot exclusively used by the mother to boil water for tea.

It is important for clinicians to consider all sources of potential lead poisoning, beyond the poisoning that can come from pipes. In our case, the Division of Environmental Medicine of the New York City Department of Health investigated the origin of the lead poisoning following the report from the medical care provider and considered many possible sources of the high lead levels.

Items potentially responsible for lead poisoning include kitchen utensils such as glazed ceramic dishes, clay pots, leaded crystal, and imported lead soldered cans. In these items, acidic foods such as oranges, tomatoes, tomato sauce, wines, and vinegar may interact chemically with the glaze and accelerate lead release. Lead is also found in some eye cosmetics such as kohl, kajal, and surma that are used in Asia, Africa, and the Middle East. Application of kohl results in lead ex- posure by hand-to-eye-to-mouth movement and subsequent ingestion of particles. Finally, traditional home remedies such as azarcon and greta contain significant amounts of lead.

Childhood lead exposure causes reduction in intellectual functioning, intelligence quotient, academic performance, problem-solving skills, and increased risk of attention-deficit hyperactivity disorder, aggression, and other mental health problems.6,8 As such, following the Flint crisis, lead exposure is rightly becoming an important focus of policy makers in the United States. In the clinic, pediatric health care providers should have knowledge of all sources of possible lead exposure and should be vigilant at assessing patients.

Tarik Zahouani, MD; Arkar Hlaing, MD; and Benamanahalli Rajegowda, MD, are from the department of pediatrics of Lincoln Medical Center in the Bronx, New York.