A 25-year-old African American, G2P2, without prior known comorbidities presented to the emergency department with 2 episodes of seizures, 8 days after an uncomplicated full-term normal spontaneous vaginal delivery. The seizures manifested as brief jerking movements of the right leg, then becoming generalized, and followed by postictal confusion. The patient also reported intermittent episodes of throbbing, bitemporal headache for the past 2 days without accompanying nausea/vomiting, fever, photophobia, or neck stiffness.

She had regular prenatal care, without complications. Her prior pregnancy was unremarkable.

Admission vital signs were normal except for elevated blood pressure at 150/90 mm Hg. There was a notable tongue bite and trace bipedal edema. The rest of the physical exam findings, including neurological exam, were normal.

The complete blood count, chemistry panel, and hepatic enzymes were all within normal limits. Serum uric acid was mildly elevated at 8.6 mg/dL (range is 2.4 mg/dL to 6.6 mg/dL). Urinalysis revealed proteinuria. Urine toxicology was negative for drugs of abuse.

She was administered phenytoin and she remained seizure-free during the hospital course. Her blood pressure was adequately controlled with oral labetalol and hydralazine. 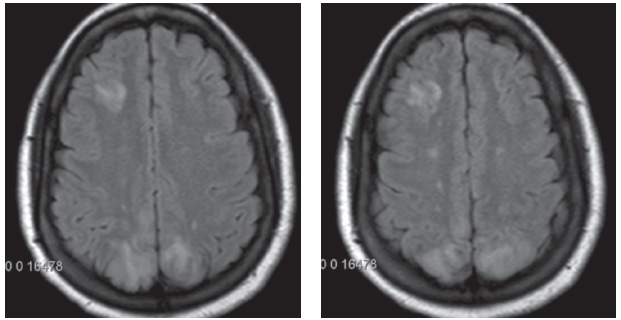 Late postpartum eclampsia (LPE) accounts for 14% of eclampsia cases. In contrast to classic eclampsia, LPE manifests between 48 hours and 4 weeks after delivery.1,2 In a large retrospective cohort study, the most common presenting symptom is a headache, which occurs in about 70% of cases.3

In our case, the patient did have a warning symptom of headache. Her blood pressure was just moderately elevated on presentation and had no significant bipedal edema. Her prenatal care history was devoid of any clues for possible development of eclampsia, but still she subsequently manifested one in the late postpartum stage.

Eclampsia is one of the known causes of PRES.4 It is suggested that PRES could be considered as an indicator of eclampsia, even in the absence of other features such as hypertension and proteinuria.5 The pathogenesis of PRES is related to hypertensive encephalopathy; PRES results from loss of autoregulation of cerebral blood flow, which results to cerebral arteriole dilatation with endothelial tight junction leakage leading to cerebral vasogenic edema.4,6 Posterior circulation tends to be more susceptible due to less sympathetic innervation of vertebrobasilar vasculature, which leads to acute marked increase in arterial pressure.7 This explains why edema is mainly seen in the posterior circulation in PRES. The clinical syndrome is known to be reversible usually within days or weeks.

LPE should be considered in the differential diagnoses in postpartum women who present with hypertension, headaches, visual disturbances, or seizures—even without prior history of pre-eclampsia. Prompt recognition and treatment with antihypertensive and anticonvulsant prevent severe maternal complications.