Large Bowel Obstruction With Cecal Perforation: What’s the Cause?

A 58-year-old man presented to the emergency department (ED) with a 1-month history of abdominal pain. He stated that the pain had acutely worsened and was constant, moderate, and sharp, with no alleviating or aggravating factors.

His last bowel movement had been 4 days ago, which he stated is normal for him, and he had passed flatus the day of presentation. He had never had a colonoscopy. He also reported decreased appetite, nausea, and constipation, but he denied weight gain, fever, vomiting, and diarrhea.

His past medical history included 3 cerebral vascular accidents (in 2008, 2009, and 2011), hypertension, hyperlipidemia, glaucoma, and traumatic left-eye blindness. His past surgical history was noncontributory. He had a positive family history for cancer (lung cancer in his father, who was a chronic smoker, and breast cancer in his mother). The patient smoked 1 pack of cigarettes per day, which had decreased from his previous smoking of 3 packs per day for 30 years. He also reported daily alcohol use, usually 5 to 6 12-oz cans of beer.

He had been prescribed cyclobenzaprine for muscle spasms after his most recent stroke, which had caused left-sided hemiparesis that had since resolved, as well as simvastatin for hyperlipidemia and aspirin for thromboembolic prophylaxis.

On physical examination in the ED, the man was noted to be alert and ill-appearing but in no acute distress. His temperature was 36.8°C, respiratory rate was 20 breaths/min, heart rate was 70 beats/min, and blood pressure was 130/94 mm Hg. His body mass index was 24.41 kg/m2. His abdomen was soft and distended, with no discoloration; it also was tympanic to percussion, with active bowel sounds and right-sided tenderness and guarding. The rectal vault was empty, with no blood or masses, and with normal rectal tone. His extremities exhibited no cyanosis or edema, and pulses were 2+ bilaterally. His skin was melanotic with poor turgor.

Initial laboratory test results showed a decreased potassium level (3.3 mEq/L) and an elevated alkaline phosphatase level (120 U/L). A computed tomography (CT) scan of the abdomen and pelvis (Figures) showed a constricting lesion at the junction of the descending colon and the sigmoid colon, with marked dilatation of the colon proximally. Additionally, cholelithiasis was evident. A flexible sigmoidoscopy was performed for further evaluation of the lesion and showed a sigmoid polyp and diverticulosis, in addition to the mass. 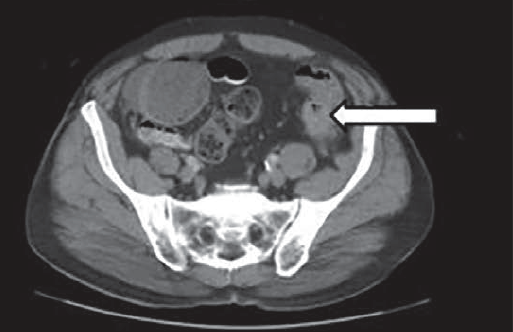 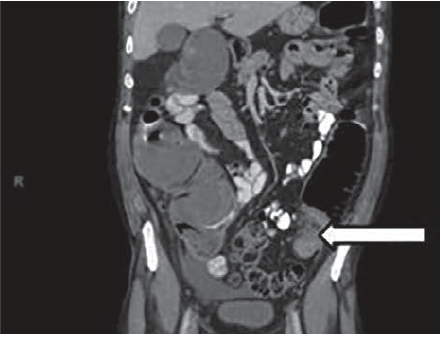 What is the most common cause of large bowel obstruction in the United States, including this patient's case?

Bowel obstruction is they key finding in a significant number of surgical abdomens, accounting for one-fifth of all cases.1 Of these cases, large bowel obstructions account for 20% to 25%.1 Among the several possible causes of large bowel obstruction, the most prevalent in the United States is neoplasm (60% of cases); other causes include diverticulitis (20%), volvulus (5%), intussusception, inflammatory bowel disease, congenital megacolon, and fecal impaction/obstipation.1-3

Colorectal cancer most commonly causes obstruction when it occurs in the left colon as a result of the smaller lumen; however, less than one-third of patients present with obstruction as a chief complaint.2 Obstruction caused by diverticulitis results from chronic inflammation leading to hypertrophy of the muscle fibers and fibrosis and causing stricture of the bowel. Volvulus is primarily seen in the sigmoid colon and cecum in institutionalized elderly patients who have chronic constipation; volvulus should also be suspected in women with obstruction in the third trimester of pregnancy.2 Endometriosis is also a rare cause of large bowel obstruction.2

If large bowel obstruction is suspected, several laboratory and imaging tests should be pursued to determine the severity, the development of complications, and the cause. A complete blood cell count (CBC) and a serum electrolyte assessment can identify complications caused by malabsorption and colorectal cancer. An abdominal radiograph may indicate gaseous distension of the large bowel, subdiaphragmatic air, and kidney-bean shaped loops of bowel (as seen in volvulus).2 Abdominal CT is the imaging test of choice if large bowel obstruction is suspected, given that it can help identify more than 90% of cases.4 Results of contrast enema can indicate a “bird’s beak” suggestive of volvulus or an “apple core sign” suggestive of colorectal cancer. Flexible sigmoidoscopy is diagnostic and therapeutic when radiographic signs of volvulus are seen.2 Biopsy of any lesion confirms the diagnosis of colorectal cancer. Free subdiaphragmatic air can be an incidental finding on erect chest radiography.2

When considering a diagnosis of large bowel obstruction, it is important to rule out other possibilities. Rarely, obstipation can be caused by functional obstruction and not mechanical obstruction in acute colonic pseudo-obstruction (Ogilvie syndrome).1 Obstipation is differentiated by abdominal distension in the absence of tenderness. It is typically seen in older patients with a severe illness such as a pneumonia, coronary artery disease, cardiovascular accident, renal failure, or retroperitoneal malignancy.2 It is common in patients who are taking antipsychotic medications, opioids, and/or laxatives. There may be a history of recent trauma or surgery. Radiographic presentation of gas in the rectum is common.5 Contrast enema is the diagnostic test of choice and excludes mechanical obstruction.

Chronic megacolon is differentiated by a long history of constipation, diarrhea, or fecal incontinence; visceral neuropathy (eg, Chagas disease); and/or risperidone use. Toxic megacolon can be differentiated based on the clinical picture alone, including evidence of preceding colitis and early signs of sepsis (eg, fever, tachycardia, hypotension, poor capillary refill). Toxic megacolon can be differentiated radiographically by identifying the “thumbprinting” sign or pseudopolyps.2 The diagnosis is confirmed by colonoscopy, which reveals a typical mucosal appearance.

Pseudomembranous colitis is differentiated by a recent history of antibiotic or immunosuppressant use; profuse, foul-smelling diarrhea; leukocytosis on CBC; pseudomembranes and a lack of mechanical obstruction on colonoscopy; and Clostridium difficile-positive stool cultures.2

Complications associated with large bowel obstruction occur frequently and usually stem from perforation, which can lead to peritonitis, intra-abdominal abscess formation, sepsis, and death.3 The most common sites for perforation are tumors, diverticula, and the cecum, especially when it is dilated to 13 cm or more.3 If perforation does occur, the mortality rate of large bowel obstruction doubles from 20% to 40%.1 Treatment can be complicated by anastomotic leakage and dehydration/electrolyte disturbance.1 Perforation should be suspected in patients who present with fever, severe tenderness, and abdominal rigidity.1

Moreover, the cause of the bowel obstruction must be addressed. In many cases—including those with masses, diverticulitis with perforation, and volvulus—resection is necessary with either anastomosis or temporary ostomy formation. In the case of fecal impaction, manual removal can be attempted, but failing that, laparotomy must be performed.3 An alternative treatment in the case of a constricting mass is endoscopic dilation and stent placement, which can be palliative in the case of unresectable malignancy, or can offer temporary relief in order to prepare for surgery.1

On the day following admission, our patient’s clinical appearance had deteriorated, with increased subjective pain, peritonitis, rebound tenderness, and guarding of his abdomen, leading to emergent exploratory laparotomy.

Upon entering the abdomen, feculent material was diffusely found coating the abdominal contents from the liver to the pelvis. A 0.4 × 0.3-cm perforation was found in the cecum, and a 4.5 × 3.6 × 1.1-cm hard mass was found in the left colon that was densely adherent to the abdominal wall. A subtotal colectomy with ileostomy formation was performed, and specimens were sent for pathology examination. Pathology test results showed invasive, poorly differentiated adenocarcinoma of the sigmoid colon, with mucinous and signet ring cell morphology involving 4 of 41 lymph nodes.

During the immediate postoperative period, the patient became febrile, tachycardic, and tachypneic, meeting the criteria for systemic inflammatory response syndrome and indicating the presence of infection. He was promptly treated with aggressive fluid resuscitation, phenylephrine, and intravenous piperacillin-tazobactam.

On postoperative day 3, the patient’s case was complicated by anemia, for which he received 2 units of leukocyte-reduced packed red blood cells. Further deterioration in his clinical course was marked by acute hypoxic respiratory failure with bilateral pleural effusions, necessitating endotracheal intubation for 3 days and bilateral pigtail catheter placement. With this intervention, his clinical status gradually improved.

Enterobacter sputum cultures revealed resistance to piperacillin-tazobactam, which prompted a change to cefepime.

By postoperative day 12, the patient exhibited marked improvement, noted by resolution of pleural effusions and improvement of respiratory status, allowing removal of one pigtail catheter, advancement to regular diet with dietary supplements, and increased mobility. He was transferred out of the intensive care unit.

By postoperative day 16, his clinical course was complicated by a hypotensive period during which progressive incisional dehiscence of the abdominal wound occurred, making visible a portion of small bowel with moderate subcutaneous tissue necrosis. Surgical debridement and closure with placement of a Penrose drain was performed, with subsequent resolution of hemodynamic status.

Andrew Rosenthal, MD, is associate director of the Division of Trauma Services at Memorial Regional Hospital in Hollywood, Florida.