An 18-year-old young man without a significant past medical history presented with 2-day history of swelling of the forehead above the right eye. He reported having taken aspirin for the swelling, leading to minimal improvement. He recalled 2 occasions on which he had hit his forehead, once 3 months prior on a lawnmower handle and again 2 months prior while swimming in a pool.

A computed tomography (CT) scan of the head showed a lytic lesion in the midline of the frontal bone involving the inner and outer tables of the calvaria, distinctly separate from the frontal sinus, and extending into the epidural and subgaleal spaces. 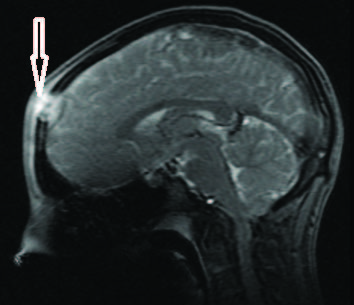 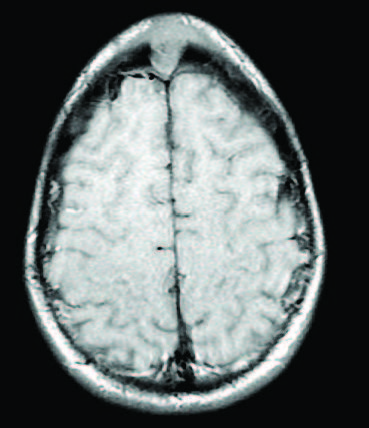 Figure 1. Brain MRI results showed a solitary lesion of the skull. The central nonenhancing portion extends into the subcutaneous tissues eccentrically to the left. There is extensive symmetric frontal subcutaneous enhancement.

Because of suspected chronic osteomyelitis of the skull related to his previous head trauma, the patient initially received intravenous ceftriaxone and vancomycin in the emergency department; the regimen later was changed to a 7-day course of vancomycin and cefepime after consultation with an infectious disease specialist.

A neurosurgeon consultant recommended image-guided craniotomy for resection of the skull mass with subgaleal dissection of the tumor, which the patient underwent on hospital day 1. Wound cultures and surgical pathology specimens were taken intraoperatively. Due to the ambiguous pathology of the mass on frozen section biopsy, primary cranial reconstruction was not performed at that time. 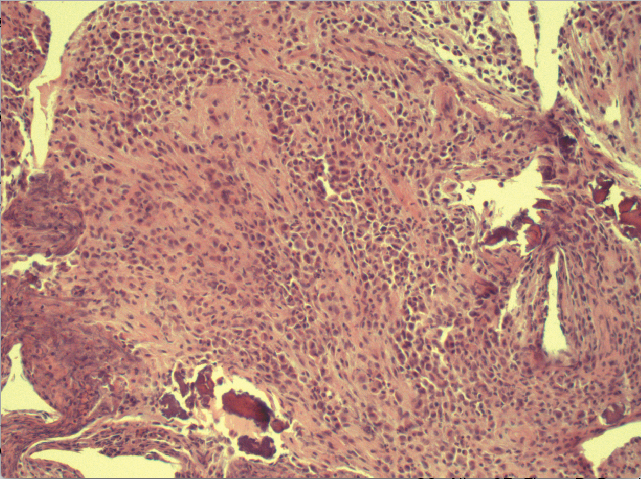 Confirmation of the pathologic diagnosis of LCH was made after 2 other expert consultations, which confirmed the presence of Langerhans cells positive for CD1a, S100, and vimentin, and negative for CD68, myeloperoxidase, EMA, and MITF. Aerobic and anaerobic cultures of the mass were negative for evidence of osteomyelitis. 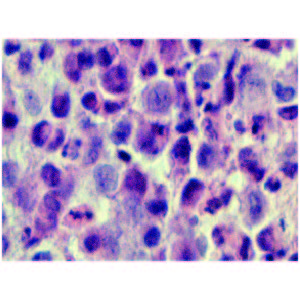 The remainder of the patient’s hospital course was unremarkable, and he was discharged on hospital day 7. At discharge, he complained of swollen left-sided submental lymph nodes and swollen bilateral preauricular lymph nodes, which had resolved at an outpatient follow-up visit 2 weeks after discharge. The patient returned for cranioplasty 2 months after the initial craniotomy and mass excision.

LCH is a mass proliferation of pathologic Langerhans cells with indeterminate cells, interdigitating cells, macrophages, T lymphocytes, multinucleated giant cells, and eosinophils.1 The condition classically had been subdivided into distinct entities based on clinical manifestations—Hand-Schüller-Christian disease, Letterer-Siwe disease, and eosinophilic granuloma—but these terms have been abandoned.2 LCH presents most often in children, with a peak age of diagnosis between 1 and 3 years.3,4 Most cases of LCH are limited to children between 1 and 15 years of age, although adults also can develop the condition.5,6 LCH has a male to female ratio of 1.5 to 1.5

In LCH, granulomatous deposits of Langerhans cells can appear in unifocal (33%) or multifocal presentations (66%) at various sites in the body; listed in decreasing frequency, these are bone, skin, lymph nodes, liver, spleen, oral mucosa, lungs, and central nervous system (CNS).7 The initial presentation of LCH is highly variable depending on the organ systems involved. In one study, 47 adults diagnosed with LCH had a wide variety of presenting symptoms including rash (26%), dyspnea (13%), thirst and polyuria (13%), pain (12%), lymphadenopathy and/or splenomegaly (9%), weight loss (8%), and fever (7%); gum hypertrophy, arthralgia, aural discharge, ataxia, and amnesia also were reported.8 Diabetes insipidus is the most common presenting initial CNS sign of LCH.9

Nonpathologic Langerhans cells are antigen-presenting dendritic cells that are present only in the mucosa and skin and have an important role in adaptive immunity.10,11 In the presence of colony-stimulating factors, monocytes with marker Gr-1 undergo differentiation to become Langerhans cells.12

The pathogenesis of LCH has been attributed to a dysregulation of the immune response to a viral infection and aberrant chemokine receptor expression.13 The abnormal retention and proliferation of pathologic Langerhans cells is thought to occur through expression of inflammatory cytokines, chemokines, and chemokine receptors. LCH samples from various tissues including bone, skin, and lymph nodes exhibit aberrant co-expression of chemokine receptor CCR6 (normally expressed by immature dendritic cells) and CCR7 (normally expressed by mature dendritic cells).14,15 LCH samples also have demonstrated the presence of inflammatory chemokines CCL5/RANTES and CXCL11/I-TAC, accounting for the recruitment of eosinophils and CD4 cells in LCH lesions.16

Multifocal manifestations of LCH exhibit dysregulation of expression of the cell adhesion molecule E-cadherin, suggesting that the loss of this factor contributes to disseminated disease.17 The immunostimulatory function of normal activated Langerhans cells also is exhibited by Birbeck granules, which are acidic organelles that process antigens for T cell sensitization.18 The lack of these granules seen in normal resting Langerhans cells and the characteristic presence of these granules in LCH further confirm an immunomodulatory component in the pathogenesis of LCH.

LCH also is associated with somatic mutations in the BRAF gene and subsequent activation of the RAS-RAF oncogenic pathway. Studies have demonstrated that the majority of samples of pathologic dendritic cells in LCH exhibit V600E mutation of BRAF.19,20 Oncogenic BRAF mutations are associated with subsequent activation of the RAS-RAF pathway, including tyrosine kinases MEK and ERK.21 Molecular studies also show that the expression of activated phospho-MEK and phospho-ERK in LCH does not vary with BRAF mutational status, which confirms that LCH is a clonally derived neoplasm, although non-BRAF-inciting mutations are not known at this time.20 LCH therefore is recognized as a neoplastic disease associated with intense expression of inflammatory cytokines and chemokines, similar to the understood pathophysiology of Hodgkin lymphoma.22

The treatment of LCH is determined by the extent and nature of a patient’s disease. Guidelines from the Histiocyte Society stratify risk based on the presence of disseminated disease (unifocal vs. multifocal disease) and the presence of organ dysfunction.2 In the presence of organ dysfunction, risk stratification is further based on the type of organ involvement. High-risk disease is associated with lung, liver, spleen, and hematopoietic system involvement; low-risk disease is associated with skin, bone, lymph node, and pituitary gland involvement.2 Due to evidence of high 5-year survival in pediatric-onset pulmonary involvement of LCH, it has been suggested that the lungs should no longer be considered a high-risk organ.23

Cutaneous LCH is common, but limited (unifocal) cutaneous disease is very rare, and many cases likely represent patients who have been inadequately evaluated at presentation.24 Children with presumed isolated cutaneous LCH can be monitored; however, 40% have or will develop multisystem disease.24,25 Symptomatic patients with skin-limited LCH should be treated with oral methotrexate and mercaptopurine for myelosuppression.26

Patients with unifocal bony lesions, such as those in our patient, can be treated effectively with resection and/or corticosteroid injection.27 Once treated, these lesions have a 10% recurrence rate.28 However, bony LCH lesions in the craniofacial region (eg, orbital, mastoid, temporal, sphenoid, zygomatic, ethmoid, maxilla, paranasal sinuses, anterior cranial fossa, posterior cranial fossa) are considered high risk for CNS involvement.7 Craniofacial LCH has been identified as a risk factor for the development of diabetes insipidus secondary to LCH involving the posterior pituitary gland, and this risk increases with the extent of disease and with LCH recurrence.7

Multifocal disease involving only low-risk organs is treated with a 1-year course of vinblastine and prednisone. Multifocal disease involving high-risk organs is treated with vinblastine, prednisolone, and mercaptopurine for 6 weeks followed by response-triggered milder continuation therapy for a 1-year total duration of therapy. The Histiocyte Society’s LCH-III trial found that lower recurrence rates are achieved by prolonged (1 year) therapy in patients with both low- and high-risk organ involvement.29 Recurrence is common (approximately 40%) among persons with multifocal disease, and it is independent of high- or low-risk organ involvement at initial presentation.30 Age no longer is considered an important prognostic factor in patients younger than 2 years old, since the LCH-II study demonstrated that these patients without high-risk organ involvement had similar mortality rates to those of older patients.31

Treatment options for CNS LCH and for craniofacial LCH with a high risk of CNS involvement include cytarabine, vinblastine/prednisone, cladribine, clofarabine, and resection with or without low-dose radiation therapy.32-35

Gloria Fioravanti, DO, is director of the internal medicine residency program at St. Luke’s University Hospital and an associate professor of medicine at Temple University School of Medicine, both in Bethlehem, Pennsylvania.

Jennifer Axelband, DO, is a critical care attending physician at St. Luke’s University Hospital and an associate professor of medicine at Temple University School of Medicine, both in Bethlehem, Pennsylvania.

Alden Smith, BA, is a medical student at Temple University School of Medicine in Bethlehem, Pennsylvania.

Michael Hughes, BS, is a medical student at Temple University School of Medicine in Bethlehem, Pennsylvania.

Emily Keeler, DO, is an internal medicine resident at St. Luke’s University Hospital in Bethlehem, Pennsylvania.